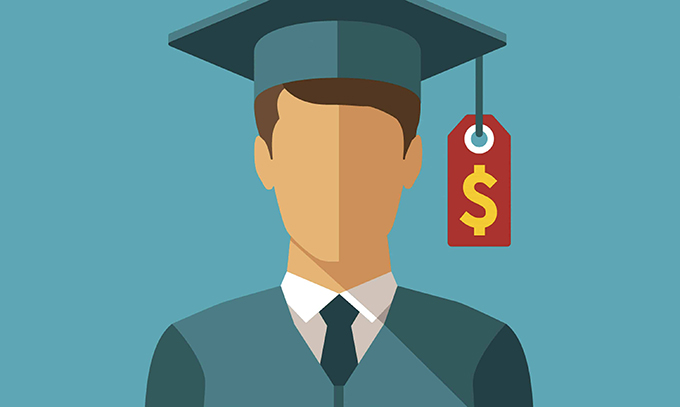 Around 50,000,000 people have student loans (more official numbers are like 45,000,000, but I dispute their accounting methods). The bulk of these people have taken these loans in exchange for worthless college credits, while perhaps 20% actually managed to get a degree, with the value of such a degree varying from $0 to, well, something more than that (weighted towards the low end).

Maybe “loan forgiveness” is the answer? There is a host of such programs, but the big one was created in 2007:

…the Public Service Loan Forgiveness (PSLF) program, which George W. Bush signed into law in 2007. Under that program, certain public servants—including teachers—who have made 120 qualifying payments on their loans can have their slates wiped clean. The program only counts payments after October 1, 2007, meaning no one was eligible to apply for loan forgiveness until late last year.

“120 qualifying payments” means you need to make your monthly loan payment without fail, for ten straight years—gee, if you could do that, you probably don’t really need forgiveness. But, the rules are clear enough. Let’s take a look at one person’s journey to get forgiveness, to give some insight into how hard it is to achieve:

In 2001, Bradford graduated from Central Washington University with a master’s degree in history. At the time, he owed about $17,000 in student loans,

That’s a small loan by today’s standards…maybe he’ll catch a break with forgiveness? As per the requirements, he goes to teach at the right kind of school:

… teachers who’ve been at low-income schools for at least five years to have up to $17,500 of their student loan debts forgiven. More than 75 percent of the students in Yakima live in poverty, and Bradford has been teaching there for more than 13 years. He currently teaches social studies to incarcerated students at the juvenile detention center. He’s precisely the sort of graduate the program is supposed to help.

So, the guy’s a saint, he’s doing everything right, and devoted to honorable work. What happened?

But he found he had started his education about a month too early to qualify.

Oops! Gosh, those technical details are rough. The man didn’t give up, though, and tried another program:

The program only counts payments after October 1, 2007, meaning no one was eligible to apply for loan forgiveness until late last year. Bradford waited a few months, then applied. He was denied on the grounds that he hadn’t made enough qualifying payments.

Qualifying payments? What? It’s not enough that you make payments, only certain payments qualify:

…the only loan repayment plans that qualify are income-driven. Bradford’s plan is graduated, meaning it goes up over time but does not change based on his earnings. So again, a program that theoretically exists to help people like him doesn’t actually do them any good at all.

The gentle reader should understand there’s a very significant government bureaucracy dedicated to student loan forgiveness…but it seems like they are far more dedicated to denying forgiveness than anything else. Does anyone make it through the endless minefields?

Through the end of June, more than 28,000 borrowers have applied for loan forgiveness under the PSLF program. Of them, precisely 96 borrowers have had their applications approved,…

Even if exactly 100 borrowers were approved, well, that’s 1 in 280 applicants…and we’re not at that level. You are nearly 30 times more likely to get lung cancer than qualify for loan forgiveness. At least we don’t have a government bureaucracy to give people lung cancer, so there’s that.

Keep in mind, this guy had a loan comparable to a car loan, which most folks can pay off in less than a decade. After his many years of payments, what’s he down to?

Bradford received a letter informing him he’s eligible to apply. But he’s not sure if it’s even worth trying. “I know I’m going to be rejected again,” he says. Plus, Bradford only has about $5,000 left to repay. At this point, he and his wife might just pay it off and “be done with it.”

Not to sound cavalier, but paying it off makes much more sense than continue to jump through government hoops in an attempt to get those last few thousand forgiven.

I feel the need to point out the anecdote above is nearly ideal, and still he got nowhere. Millions of people with student loans were assigned those loans fraudulently, either via fly-by-night schools which had no interest in education, or even by state schools who sacrificed quantify over quality, bloating the size of the campus while doing very little to help all the new kids in the classes.

I know my blog is insignificant, but I do wish there was a way to at least get the message out about “student loan forgiveness” programs because they quite obviously don’t work.