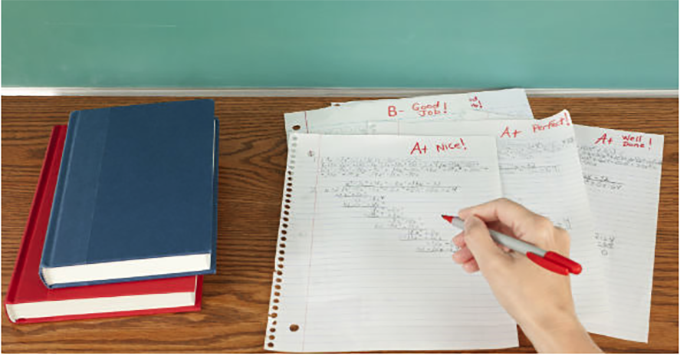 In this 2022 baccalaureate session, correctors having discovered that the marks they had awarded during the specialty tests were subsequently systematically increased , a recurring controversy has just started again, like a forest fire at the start of summer: the marks of the tray would be the subject of a “tampering” .

Of course, the gigantic proofreading operation has no vaccine against manipulation, and dodgy maneuvers are always possible. Should we, however, go so far as to speak, as some unions would have done, of a “cheating offense”  ? The promptness and vigor of the suspicions recall in any case the strength of a certain number of received ideas around the evaluation, to which it is appropriate to return, from the objectivity of the mark to the links between the success rate and the value of a review.

The rating, a relative measure

Any change in grade after the fact seems inadmissible to anyone who thinks that the grade assigned by a proofreader is an objective measure of the value of a production. But all docimology work has shown that this is not the case. The marks fluctuate , among other things, according to the correctors, the place in a batch of copies, the moment of the correction.

The comparison with the temperature given by a thermometer is fundamentally misleading, from the double point of view of the nature of the object appreciated, and that of the tool used. Temperature is a physical phenomenon, measured by a tool based on the observation of physical variations.

The “level” of a pupil is not an objective internal datum (like blood pressure for example) but a hypothesis made on the development of a set of “abilities” (knowledge, skills, interpersonal skills: we have difficult to designate them) which can only be grasped through behaviors that are supposed to express them more or less directly. The corrector judges the presence (or not) of these abilities, which can never be proven with certainty.

The grade is only a way (convenient, hence its success) of expressing an overall judgment on the “capacity to” which is always hypothetical, and by nature elusive. To step up to the plate for one point more or less therefore makes little sense. The key is to do everything possible to prevent the most damaging biases, and the most worrying discrepancies.

Severity, a guarantee of reliability?

But two questions arise. First of all, when does the selling off start? Where is the limit between normal increase (progress of generations) and demagogic increase (desire to promote a policy by misleading on the real level)? Who can claim to be able to set indisputably the success rate to be considered optimal, because “fair”, and expressing in an acceptable way the quality of the school system?

Can we, then, think that the lower the success rate, the greater the reliability and the value of the diploma obtained by examination? Should we not, on the contrary, rejoice in a high success rate, which would mark the educational excellence of the system, and the success of the work of the teachers  ?

Shouldn’t secondary education set itself the goal of 100% success? Aiming for a restricted rate would amount to sanctifying the elimination of a large part of French youth. In any case, no research shows that the more severe an examination, the more reliable it is.

The third received idea is a priori more difficult to condemn. It can be expressed as the belief in the existence of an unhealthy tendency, within the administration of national education, and under pressure from political decision-makers, to tamper with baccalaureate grades. It should be noted that this suspicion is all the more frequent among union leaders when the executive is dominated by parties that do not have their favour.

We imagine human hands (those of the ministry) surreptitiously turning the handles of the scoring system, to influence the results in a direction that is favorable to them. This work of influencing the results would go hand in hand with the desire to dispossess the juries of their power of judgment. This would manifest, at the limit, a contempt for the proofreaders who scrupulously carried out their work upstream.

But are we to believe that the administration lives with the temptation of “small internal arrangements”? Should we place on it the suspicion of an irrepressible tendency to sell off, out of political calculation, and ultimately out of demagoguery?

Such a suspicion is very contemptuous with regard to the workers of the ministry, and even of the political decision makers. The opposite hypothesis, of the existence of a sincere wish to assess as accurately as possible the “level”, both of the system and of the pupils considered individually, has at least as much relevance. Failing to sink into a criticism, ferociously populist, of “all corrupt, all cheaters”.

Modifying notes, if one has serious reasons for doing so, is therefore neither a sin nor an offence. Serious reasons abound: to correct possible excesses in the severity/leniency balance; avoid too large differences between the marks, which would result from the divergences of judgments between correctors, or from the differences in difficulty of the subjects proposed for the same test.

Grading being what it is, an evaluation practice that is always uncertain, and not a measurement operation, the moderation and harmonization of assessments (grades) are a necessity in the dual concern of less subjectivity, and of greater fairness. Of course, the moderation process must itself be clear and controllable. But evaluating requires betting on the goodwill of all the other actors involved in the process.