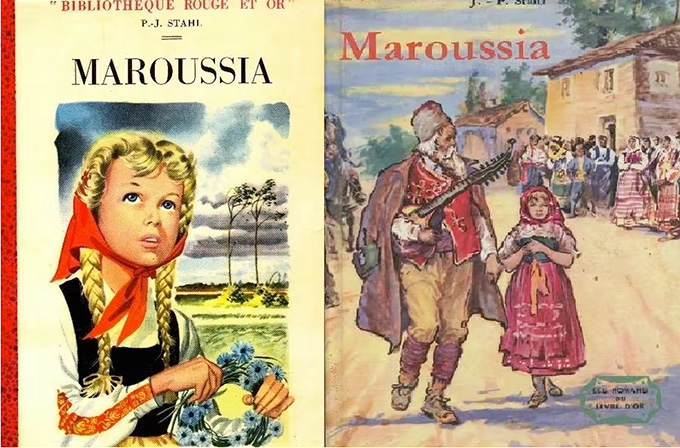 “I am going to tell you what happened a long time ago in Ukraine, in an unknown but cool and charming corner of this country. » Thus opens the first episode of Maroussia by P.-J. many times, has enjoyed lasting success in France and today takes on particular importance.

Stahl adopts the form of the tale, which refers the story to a distant past. However, a few lines later, the author situates the facts he reports quite precisely, even if he does not date them. The story, he says, takes place after the death of Bogdan Khmelnitski (thus after 1657), in a Ukraine partly subject to Russia, partly to Poland.

One day, a Cossack shows up at a peasant’s house and reveals that he has a mission to accomplish: he must go to the two Ukrainian leaders to try to unite them so that the people can drive out the foreign invaders and to regain their independence. Little Maroussia, the daughter of the master of the house, then offers to help the Cossack to cross the Ukraine by hiding from the Russian soldiers. She accompanies her friend for more than a year on his mission, before dying at the end of the story, while the helpless Ukrainians are about to give up the fighting.

How to explain the interest of the public for the history of a distant land and previous events of more than 200 years when Stahl publishes the account? We can evoke the deep and universal emotion aroused by the adventure of this little girl who died to defend her country. But the story’s success is no doubt also due to the fact that Stahl questions, through little Maroussia, the identity and values ​​of his reader.

This is implicitly indicated in chapter XII, which offers a key to understanding the story. The Cossack, disguised as a traveling musician, enters a Russian camp with Maroussia and performs in front of the soldiers a song whose story strangely resembles the one the reader is reading. It begins with these words: “A long, long time ago, some good people had a homeland”.

The song then tells how this prosperous country, which has no name, was suddenly invaded by its powerful neighbours. Once the song is finished, the narrator resumes: “Listening to the simple report of the facts, of which some did not seek the application, others made it. For them, it was clear. The song invites the characters in the story, the Russian soldiers, to apply its words to the situation they are experiencing, those who are precisely in the process of invading Ukraine in the 17th century.

Therefore, the author also offers his reader, in 1875, to apply the story of Maroussia to his own situation. What then could be the meaning of this story for its first readers? If we cannot determine it with certainty, we can nevertheless make hypotheses that will allow us to reflect on the meaning it may still have for us today.

The author of this “legend” is an author. Marko Vovchok is the pseudonym of Maria Vilinskaïa, wife of Opanas Markovitch, a former member of the Cyril and Methodist Society dissolved by the tsarist police in 1847, because it affirmed the equality of Slavic nations. For a woman to take a male pseudonym was not uncommon in the 19th century , think of George Sand in France, for example. On the other hand, by abbreviating the name of her husband to “Marko”, Maria Vilinsaïa opts for a Ukrainian-sounding first name.

Maria Vilinskaïa, who was born in Orel and grew up in Kharkiv, learned Ukrainian and published a collection of tales in this language, which was translated into Russian by Turgenev. On the other hand, it was in Russian that she published in Saint Petersburg, in 1872, Maroussia , “translated from Little Russian by Marko Vovchok”. She claims that the story, transmitted orally by an old storyteller, relates to events that happened “a very long time ago in Ukraine”.

The author, although writing in Russian, slips numerous allusions to the Ukrainian language, uses Ukrainian words and reproduces popular songs, which the old Cossack sings accompanied by the traditional bandoura , and which are translated into Russian in footnote. The lyricism of his pen pays homage to the beauties of the Ukrainian land and the courage of its inhabitants. From the first chapter, the story is placed under the tutelary figure of the Cossack Bogdan Khmelnitsky. Thus the story contributes to creating a memory specific to Ukraine, which is still alive today. 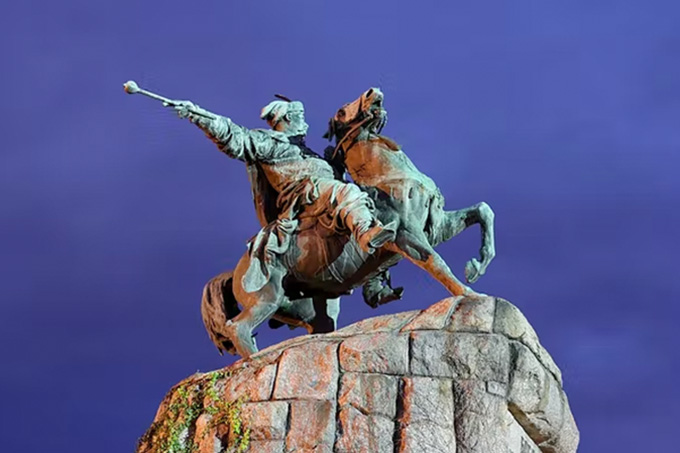 However, Stahl, pen name of the publisher Hetzel , subtitles his story “Russian legend”. He met Marko Vovchok in Paris and it was she who translated his Maroussia into French for him . Stahl, if he reproduces the author’s text quite faithfully, also adapts it to an audience who knows little about Ukraine, according to a project of his own, and which is not quite that by Marko Vovchok .

By making it a “Russian legend”, Hetzel inscribes the story in a very French tradition, which corresponds to the expectations of its readers. Indeed, many popular French stories in the 19th century tell Russian stories. One of the plots often repeated consists in highlighting the heroism of a child or a young girl, crossing the steppe at the risk of her life.

In 1806, Sophie Cottin transposes in Elisabeth ou les exiles de Sibérie a news item: between September 1799 and February 1801, Prascovia Loupalova had crossed Russia, alone, to ask for mercy for her father, a gentleman exiled in Siberia. This figure, the first avatar of the stereotype that Charlotte Krauss calls the “woman-martyr”, and which we find in many novels throughout the century, is also embodied in Jules Verne’s Nadia Fédor who, in Michel Strogoff ( 1876), travels across Russia from Riga to Irkutsk to find his father, also exiled and, in doing so, assists the famous courier of the Tsar in his patriotic mission.

Marko Vovchok chose to kill Maroussia with a Tatar bullet, which historically is not implausible. But it is certain that the Tatar of Maroussia, for the French reader, is confused with those confronted by Michel Strogoff during his long Siberian journey.

But if Hetzel chooses to publish Marko Vovchok’s Ukrainian tale, it is also to highlight “those lands that are hardly talked about”, as he writes at the beginning of his story. He also warns his reader: the Cossacks he is going to talk about are not those of the Don, the Russian Cossacks that the French public knows well. They are other Cossacks, those of whom Voltaire said in 1731 that they are “overly in love with a good that is preferable to everything, freedom”.

If they interested Hetzel in 1875, it was because, for him, the history of the Ukraine also applied to that of Alsace, recently conquered by Prussia. In 1878 the volume appeared in the Library of Education and Recreation . It then changes addressee, since the target is now children.

The transformations undergone by the text inform us about the way in which Hetzel wishes to address children, and in particular to little girls. The book is illustrated by Théophile Schuler and the author dedicates it “to Alsa, Child of Alsace, to Alsa, daughter of Théophile Schuler”: Schuler, like Hetzel, are of Alsatian origin, and both are from strong Republicans.

Such is indeed the application that Hetzel wishes to give to his legend, which is not only Russian or Ukrainian, but also fully French: behind the Ukrainian peasants who fight like brave men for their “republic” and who are animated by the motto “equality, fraternity, freedom”, we must see the French peasants of 1792, united to push back the European armies. This is how the moral that Hetzel adds to his tale takes on meaning after having compared Maroussia at length to Joan of Arc, as Ksenya Kiebuzinski has shown  : “Unfortunately there is more than one Ukraine in the world; grant God that, in all the countries which force has subjected to the yoke of the foreigner, there are born many Maroussia capable of living and dying like the little Maroussia whose story we have just told! »

Addressing French youth, Hetzel is fully in line with the educational project of the Third Republic, which aims to defend peace while preparing children for the possibility of having to go to war one day, as shown by Olivier Loubes , and that is how its first readers understood it. Thus Charles Clément wrote in the Journal des Débats of December 8, 1878: “To the emotion which throbs in these touching pages, one would say that M. Stahl wrote them under the impression of the recent misfortunes of his country of origin, and eyes fixed on Alsace. The subject seems to be from another time […] and yet there emerges from all this work of poignant reality and topicality a salutary, beneficent teaching, which is addressed to all. »

Hetzel is not unaware of the problems that the childish reception of a text that both advocates peace and defends patriotism can pose. Can a book that ends with the death of a child be addressed to children? To preserve his readership, he adds in Nota Bene a second variant of the ending, according to which little Maroussia has survived her injuries: become a young girl of striking beauty, she watches over Ukraine from the monastery where she lives. is removed.

Marko Vovchok ‘s Maroussia therefore does not tell quite the same story to its Ukrainian and Russian readers as that of Stahl to its French readers, first adults, then children. Stahl’s reading of Marko Vovchok’s story is not necessarily a betrayal: by participating in the constitution of the memory of their respective communities, the two authors raise the question of what makes a nation.

This is the reason why, no doubt, Maroussia continues to touch us today: the fictional story has this particularity, with regard to the information press, that it is not topical, since he is anchored in an imaginary shared by its author and its readers. On the other hand, it is updated by each of its readings , just as each staging updates a theater text.

Each reader reads with what he is, his history, his previous readings, his values, and all this gives meaning to his reading. All reading is always situated here and now, even when it is informed by knowledge of the past.

Thus we have the right to reread Maroussia today: this tale not only helps us to understand how Ukrainians, Russians and French defined their nation in the 1870s. 150 years later, the legend of Maroussia continues to ask us questions, to which it is up to each reader to answer, in a constantly renewed dialogue with the literary text.

Tags: form of the tale