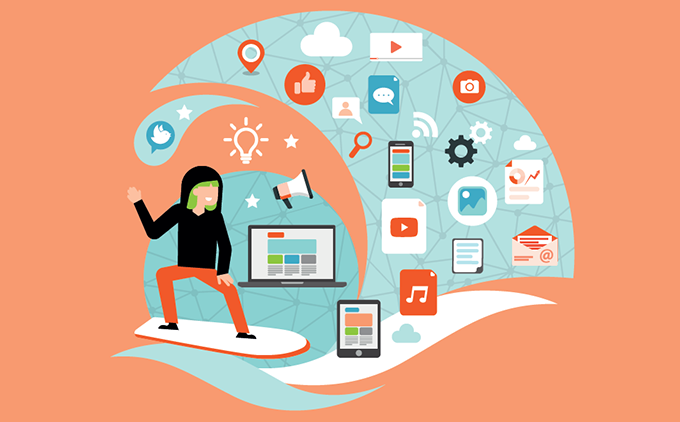 Since 2018, the education of young people and adults in digital media and information in general has been the subject of a remarkable revival of interest, due to the urgency of the fight against fake news and the circulation of discourse. of hate. This resulted in a salvo of official texts.

Having become an obligation for Member States in the Audiovisual Media Services Directive (ASMD), “Media and Information Literacy”, or “MIL”, outside and in school, is mentioned as one of the pillars of the European Union Action Plan against Disinformation . NATO has made this the object of its “cultural diplomacy” .

In France, some reports mention the EMI in their final recommendations, such as that of the Estates General of Digital for Education in 2020 or the report “Lights in the digital age” in 2022. Others make it their center of main interest: this is the case with the Economic, Social and Environmental Council in 2019, with CLEMI (the center responsible for media education in National Education) in 2021, and, the same year, with ARCOM (ex-CSA) (the public regulatory authority for audiovisual communication).

This frenzy of reports culminates in 2022, with the publication in the Official Bulletin of National Education of a circular relating to the “generalization” of Media and Information Education within the education system. This text confirms the importance of MIL and its transversal role in the disciplines. It appoints in each academy a referent, at the discretion of the rectors, (which already exists via the CLEMI), and distributes a Vademecum of reference in EMI which operates a slight update, by integrating the question of personal data and their use, finally!

The question of means

This generalization has the value of definitively anchoring the term MIL , “media and information education” instead of the expression “media education”, to align itself with Unesco and its recommendations , formulated in the Paris Agenda in 2007, as well as the recommendations of researchers , who invite the notion of information to be well integrated into the digital strategy.

Thus are realized the wishes of the historical proponents of MIL in favor of a transversal approach, and the validation of certain values ​​dear to this education, in connection with citizenship and democracy. This widespread recognition is a real step forward and marks France’s ambition, placing it among the leading countries in Europe in this area.

Still, the means of ambition are not specified in the circular. Nor is there a clear framework for the EMI, which would go through a dedicated timetable in each school cycle. The existing one is confirmed, in particular the insertion in other disciplines . Additions are made on the margins, such as the deployment of web radios in colleges. Oversights are evident at the center, such as the role of the professors-librarians, whose primary mission has been the EMI… since 2013. They also protested to the supervising minister, in the wake of the circular.

Despite all the attention and all the recommendations, MIL remains an “education for” and not a teaching, unlike the recently created cross-curricular teachings of EMC (Moral and Civic Education) and SNT (Digital Sciences and Technology) . Without this status, how can we give teachers the motivation to train in it and the evaluation bodies to put it among the skills measured?

Issues of digital citizenship… and employability

The risk is that the EMI is diluted in the disciplines and that we cannot really measure its effectiveness. It is also due to the lack of clarification in relation to the current blurring between EMC and EMI, moral and civic education (EMC) taking up a certain number of themes of media and information education (freedom of expression dear to Samuel Paty for example).

However, the EMI does not advocate morality but ethics: media ethics as well as the ethics of AI and algorithms. That is to say, it allows the implementation of digital citizenship through uses and practices, to rediscover democratic values ​​and principles through them. Finally, the risk lies in the lack of research and development on this subject, for lack of an overhanging space where it can be thought of as a discipline, with its concepts, its scope, its methodologies, its controversies…

The most flagrant missed opportunity is that of the opening up of National Education to other players in the MIL, in particular those coming under the Ministry of Culture. This has been mobilized since 2018, with a support plan financing all kinds of initiatives. A large number of actors have mobilized, such as journalists, librarians, DRACs… not to mention civil society actors, such as Céméa and the Ligue de l’enseignement , or the independent authorities ARCOM and the CNIL .

All these actors of the EMI are a chance of renewal of the school, some being called to intervene in school environment. They make the multi-actor approach, interdisciplinarity, complementarity of skills easily understandable… They also promote an MIL throughout and across life, to cope with the rapid evolution of digital media and allow to reach adults in need of requalification or simply of digital culture.

Information in all its states

Several diffraction factors combine, to use the metaphor of wave scattering, to explain the loss of density of the shock wave and the drop in impact. A number of obstacles and interferences hinder some of the spread of NDE as a teaching:

The epistemic problem, that of meaning, is profound: it is part of the crisis of confidence in knowledge and the questioning of truth treated as one opinion among others. It also comes from the deficit in general culture of digital and media bases.

The EMI pays the costs of this prolific digital space that is the Internet, which combines rational and irrational, information and opinion, entertainment and training. It has itself become a paradoxical space in which basic digital and media literacy needs compete with transversal skills needs.

MIL in the face of digital as a complex cultural fact

It is in this that the EMI needs to operate its own transformation in order to enter fully into the skills of the 21st century, in  particular by evolving towards mastering the effects and uses of data, algorithms and AI, and not just from the press. It must indeed be conceived as a transversal skill and as a transdisciplinary teaching. In the same way as knowing how to read, write and count are taught for themselves and are also used for mathematics as well as for biology or history.

It is now necessary to know how to navigate and publish online, to show critical thinking to discern quality information, to create relevant and innovative content, to ensure its online presence, to operate in project mode, to solve complex problems, even conflicts. (in the case of misinformation). These skills will be in addition to those needed in conception, design and programming for employees and citizens of the digital age, as noted in the WEF report, “The Future of Jobs” .

The EMI participates in the general culture essential to fill the current lack of understanding of digital technology and give it an ethical and humanist dimension, without disengaging from the fight for democratic and emancipatory values. The needs are enormous to ensure online well-being, knowledge of digital responsibilities and rights and to anticipate instead of suffer, as demonstrated by the profound disruptions of the health crisis, misinformation, and distance learning for all . And this goes through the school because it remains the greatest resource for reaching all territories and smoothing out social and economic disparities.

The actors of the EMI, inside and outside the school, must continue to structure themselves, while keeping their diversity and developing their complementarities. They need a space to think about and develop MIL, the digital way, on a co-regulatory, multi-sectoral basis, which does not reproduce pre-digital silos. Less an interdepartmental cell as recommended by the Enlightenment report in the digital age than an independent networked body. It could be a common and decentralized platform for both constructive and participatory coordination. Perhaps the solution is for young people, with an EMI “app”. All financed by a small fraction of the 15% tax on digital giants, to provide the means to meet the challenges.