“Like most people I read a book or two on holiday,” says Stuart, a character in Julian Barnes’ 1991 novel Talking it Over. He does not have time for recreational reading; it must wait until he is at leisure. His best friend, the erudite but erratically employed Oliver, derides this attitude. To Oliver, a summer reader is a pedestrian one: incurious and intellectually lazy.

Summer reading – or the beach read – is often associated with undemanding, enjoyable narratives: “middlebrow” literary fiction, thrillers, fantasy novels, historical and contemporary romances. This is even reflected in the physical design of books released in the summer months. Light colours and cheerful covers signal their lack of intimidating seriousness.

While the term “beach read” itself is relatively recent, first appearing in publishing lists and booksellers’ catalogues in the early 1990s, traditions of summer reading are much older. 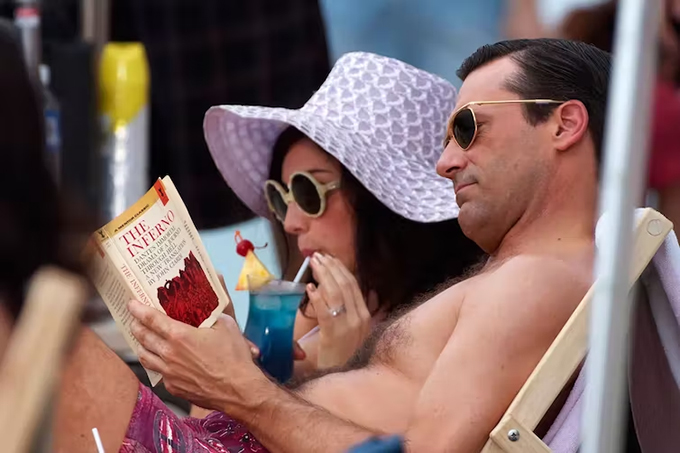 A beach read doesn’t have to be trivial. Don Draper took The Inferno to Hawaii as his holiday reading. Mad Men/AMC

Communications scholar Donna Harrington-Lueker notes that in the early 19th century, holiday reading was often viewed as a mark of gentility and refinement. Travellers were encouraged to use their abundant time to appreciate worthy classics.

The anonymous author of the essay Summer Philosophy exhorts vacationers to read books that are “good of their kind”, and offers the volumes of Lord Byron and Charles Lamb’s Elia as examples of “perfect” summer reading.

In the United Kingdom, summer months had traditionally been a fallow period for new books. Christmas was the more important holiday period for publishing. But in the post-Civil War United States, publishers and booksellers were becoming aware of the growing appetite for light reading among summer vacationers.

Rising literacy and declining costs of production had made books increasingly accessible, typically in cheap, paper-covered formats. These “dime novels” largely consisted of suspenseful narratives focusing on murder, adventure, and romance. Because of their convenient formats and frequent sales at railway and dockside newsstands, sensationalist, diverting fictions became associated with summer vacation and travel.

By the 1870s, American publishers had begun to capitalise on this trend, launching dedicated summer reading series of “light literature”. These were marketed as a respectable alternative to their dime novel competitors. Summer reads soon became a ubiquitous feature of holiday recreation.

In his travel essays, Henry James, while on a steam ship, notes the presence of “young ladies from the hotel on the deck, with copies of Lothair in their hands” (this was Benjamin Disraeli’s bestselling romance). Summer novels were typically presented as “agreeable” fiction, easy for vacationers to pick up and put down, cheap enough to be happily left or exchanged in hotels.

Much like today, summer reading had its detractors. The form of the novel itself was still viewed with suspicion throughout much of the 19th century, and the escapist titles published during the summer season were seen as especially pernicious.

The popular Brooklyn preacher Reverend Thomas De Witt Talmage delivered a memorable denunciation in 1876, labelling summer novels as “literary poison” and “pestiferous trash”, and cautioning his congregants on the shame of being found struck dead with one of those “paper covered romances” in hand.

However, the books marketed as summer reading could be surprisingly diverse. Harrington-Lueker provides Scribner’s advertised summer offerings in 1885 as an example.

The Bric-a-Brac series (memoirs and reminiscences of famous writers) was enormously popular in the summer months, as were reprinted editions of international fiction, and holiday collections of classic and contemporary poetry.

Critics and publishers defended summer reading as a necessary “release” from the stresses of the year. But a release doesn’t necessarily imply triviality, and it could clearly be found in many kinds of text.

Contemporary beach reads have a lot in common with the summer reading traditions of the 19th century. As Henry James observed of Disareli’s Lothair in 1870, there will often be a book everyone seems to be reading while on vacation.

Dan Brown’s the Da Vinci Code, Jonathan Franzen’s Freedom, Gillian Flynn’s Gone Girl, and Liane Moriarty’s Big Little Lies are all examples from their years of publication. What grips our collective imagination in any given summer may be quite revealing.

Lothair was not just a melodramatic potboiler, but also grappled with the challenges of reconciling organised religion with personal faith and morality, which would have resonated with 19th century readers. Popular beach reads may engage with familiar concerns and preoccupations – family, gender roles, history, wealth – in ways that offer a cathartic sense of release and escape.

Like the dime novels and holiday editions of the 19th century, beach reads are often disposable and exchangeable. The remnants of past summer reading seasons can be found in beachside secondhand bookstores, the common rooms of hostels, and on living-room shelves in Airbnbs. Fat, faded books with broken spines, warped and wrinkled from the sand encrusted between their pages.

A beach read can also be an experiment, a chance encounter. Discarded summer reading piles have led me to some amazing discoveries. Like the cynical, subversive fantasy novels of the New Zealand author Hugh Cook, or the exactingly described technical operations of a B52 bomber in Dale Brown’s Flight of the Old Dog. Or Donna Tartt’s iconic story of murder, college and mythology, the Secret History. My copy of the latter – lifted from a backpackers’ in 1999 – has now fallen apart after repeated summer re-readings.

The best lesson to take from the history of the beach read is that if you can only get through a book or two while on holiday, then make sure they are ones you will like.

This year, a friend of mine will be taking Ulysses with them on vacation, so they can be completely immersed – whereas I’m still looking for a worthy successor to Samantha Shannon’s The Priory of the Orange Tree, which kept me hooked all last summer. Both are perfectly fine beach reads.

As Fran Leibowitz says: “I have no guilty pleasures because pleasure never makes me feel guilty.” This should be our attitude to recreational reading all the time, but the summer beach read provides the best opportunity to fully embrace it.

This year’s summer reading lists – literary, historical, fantasy, thriller, and more – probably contain many novels that are “good of their kind”, regardless of their genre or cover design. And if they’re not, then you might enjoy them anyway.

Everyone needs their own kind of release.

Author Bio: Julian Novitz is a Senior Lecturer, Writing, School of Media and Communication at Swinburne University of Technology