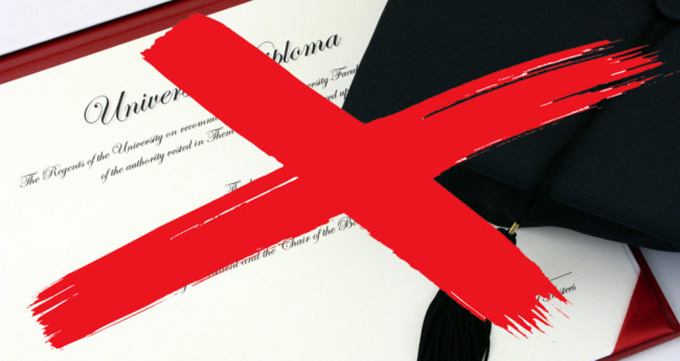 Our schools are bloated down with administrative staff. They call themselves “leaders” in education but having worked closely with quite a few of them, having studied carefully the true nature of their jobs…I’ve often wondered what, exactly, they did to justify their very high paying and extremely cushy jobs.

Primarily what they did is acquire an advanced degree, a doctorate, in “Educational Leadership.” Being curious how people could get such a degree and still know basically nothing of any field of academia and only marginally capable of doing anything useful, I enrolled in a doctoral program; I document an 8000 level course, the most advanced material in this “field,” in this blog and in my book.

Today I’ll mention an old story, demonstrating that you don’t even need a college degree, much less an advanced (and bogus) administrative degree, to have a long career as an administrator in higher ed:

I emphasize this happened at MIT, a top school by any measure of the word, and not a for-profit (which commonly has very questionable people running them), or even a typically poorly run state community college.

Marilee Jones, the dean of admissions at the Massachusetts Institute of Technology…admitted that she had fabricated her own educational credentials, and resigned after nearly three decades at M.I.T. Officials of the institute said she did not have even an undergraduate degree.

That one snippet has much in it of interest.

The most important: it’s very, very, easy to lie about your degree and get away with it. How does an employer check you actually have a degree? Well, he’d have to take the time to track down the school, possibly pay a fee…when jobs have hundreds of applicants, that’s just not going to happen. Not even at a prestigious school like MIT, apparently.

Incidentally, accreditation charges a high fee to check on the degrees of faculty, but not of admin (a holdover from the days when admin WAS faculty, and so there was no need to clarify).

How easy it is to fake a degree is particularly good to know when your degree is utterly irrelevant to your job. This is increasingly common in the modern world. Granted, college degrees were never intended to be job training, this “application” of a degree has only become mandatory after government tried to help defray the cost of degrees with easy loans, and the commensurate (and very predictable) dramatic rise in tuition thereby. Even supposed “jobs training” degrees are questionable in many fields; it takes 10 years to set up a degree program, and in fast-changing fields (eg, anything relating to computers, which is most fields today), 10 year old information is nearly useless.

In this case, it’s clear administrative degrees (or any degree) is completely useless to working as an administrator in higher ed.

The above Dean was Dean of Admissions, she was influential in rejecting the many applications MIT received. She didn’t even have a college degree, had almost no direct experience in college coursework, and yet was in the position of determining the caliber of the coursework of kids applying to MIT.

Time and again my career had to allow people with no understanding of any mathematics, freely willing to admit it even, sit in judgment over my ability to teach mathematics, over my ability to write mathematics. That they were getting paid three to ten times as much as me to perform a job duty they were utterly unqualified to perform didn’t bother them…and I was in no position to explain to them what was happening was wrong.

Keep in mind our schools are now staffed with legions of people like this, who, clearly have no business doing what they do. Diversity Institutes in particular are filled with extremely highly paid people who quite possibly don’t even have a degree, or have a degree requiring little, if any, knowledge to attain.

Before the student loan scam, administrative positions were no big deal on campus, your dean was likely to just be the chemistry professor doing the job for an extra thousand bucks or so. These never were full time jobs, really, and weren’t considered as such. Now they’re full-timers, earning ridiculous bucks and working in palaces dedicated to their comfort. Has the professionalization of college administrators (and the de-professionalization of faculty) helped education? No.

As this MIT dean shows, anyone can do that job, and do it well.

On the campus, where Ms. Jones was widely admired, almost revered, for her humor, outspokenness and common sense, students and faculty members alike seemed both saddened and shocked.

It’s really wrong how so many jobs “require” a college degree, even though the working of the job requires no such knowledge. Yes, she lied about her education but…she could do the job well. I strongly suspect the real reason they got rid of her (technically, she resigned) is because keeping her would be admitting their own jobs don’t require degrees or ridiculously high pay, either.

It’s even more wrong that our schools are run by people who know full well the “educations” they sell so exorbitantly is all too often of no value whatsoever.