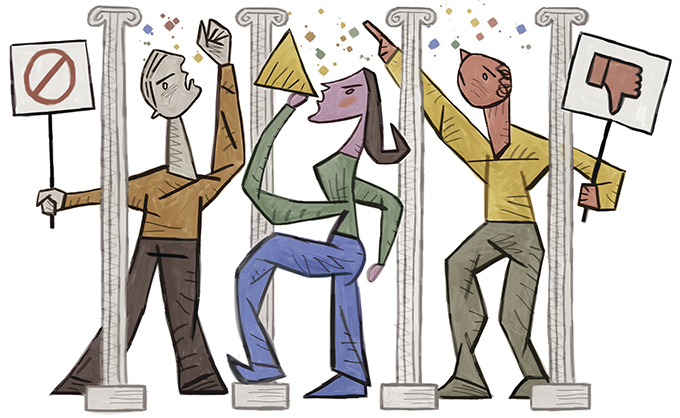 One measure apparently under consideration is the extension of the Education (No. 2) Act 1986 to specifically oblige students’ unions – in addition to universities themselves – to “take such steps as are reasonably practicable to ensure thatwithin the law is secured for members, students and employees of the establishment and for visiting speakers”.

In fact, the last clause of relevant section of the Act already states that it applies to “premises occupied by the students’ union”, but students’ unions themselves have controversially contested for the past 30 years that since they are separate legal entities, the act still does not directly apply to them.

In 2018, Parliament’s Joint Committee on Human Rights recommended that the Office for Students should publish an annual report on free speech at universities. However, the push to resolve the legal discrepancy has continued to gain momentum on the political right amid perceptions that universities are sites of resistance to the Conservative agenda. Opposition to Brexit, criticism of British imperial history and the promotion of identity politics are viewed as problems fostered within universities and now seeping out into the wider public.

The Department for Education has already suggested that funding to help universities deal with the Covid-19 crisis will be subject to their ensuring freedom of speech; the same document criticises their subsidising of students’ unions’ “niche activism”. But it seems that even if a university doesn’t require a government bailout, further measures will be introduced to ensure that right-wing speakers aren’t heckled, protested or “no-platformed” by their students.

But is that aspiration realistic? The 1986 Act was itself introduced during a wave of protest by students at the height of Margaret Thatcher’s programme of privatisation and union-busting. A visit by home secretary Leon Brittan to the University of Manchester in 1985 culminated in the police violently breaking up a large student demonstration, and the next two years were peppered with student protest against visiting right-wing MPs, including pickets, disruptions, heckling and disinvitations. Those that invited these speakers – usually the university’s Conservative Association or the Federation of Conservative Students – also felt the backlash from students’ unions and left-wing student groups.

As in the modern era, these student actions were portrayed by politicians and sections of the media as an attack upon freedom of speech. The then education secretary, Sir Keith Joseph, called students “the new barbarians”, who were not interested in “orderly and serious discussion” and refused to engage with ideas that they did not agree with.

Although many of the actions were not invocations of a “no platform” policy (which had been officially endorsed by the National Union of Students since 1974), they were portrayed as such. In the House of Commons, the MP John Carlisle, who had been the focal point of several student protests, stated that several meetings had not taken place “following violent attacks on various visiting speakers” and that legislation was needed “because certain universities and colleges of further education persist in passing no-platform policies”.

A Private Members’ Bill was first introduced in February 1986 in response to the hostile reception that Home Office minister David Waddington had faced at the University of Manchester the previous December, when he had been jeered at and covered in alcohol. The proposed bill sought to impose a duty on university authorities to ensure that “they had taken all reasonable steps” to maintain the right of free speech, including “a proper disciplinary code, adequate action against offenders, fines on student unions…and arrangements for the admission of the police, where necessary”. The bill was eventually incorporated into the wider act.

Carlisle claimed that the legislation sent a message to students’ unions that “the British taxpayer will not tolerate no-platform policies”, which “should not be a part of any university”. However, within a few years, there were complaints that its provisions were not strong enough. The Conservative Collegiate Forum, a successor organisation to the Federation of Conservative Students, released a report in 1989 claiming that many universities placed severe financial onus on the organisers of campus events, leaving them exposed if protesting students threatened disorder and therefore disincentivising them from inviting external speakers.

However, such complaints disregarded that freedom of speech also implied the right to vocally object to and demonstrate against speakers. A university would have to weigh up these competing notions of freedom of speech when looking at campus events, and security considerations were a significant factor in decisions about whether they should be allowed to go ahead. This is what “reasonable steps” meant in the legislation.

Student protest, including the use of no-platform policies, did not end with the 1986 Act, and nor will new legislation be the panacea that sections of conservative and libertarian opinion are hoping for. But, at the same time, it will be another government intervention in university and student union affairs, at a time when the political right is seeking to bring the higher education sector more into line with its political, economic and social agendas.

Author Bio: Evan Smith is a visiting fellow in the College of Humanities, Arts and Social Sciences at Flinders University.