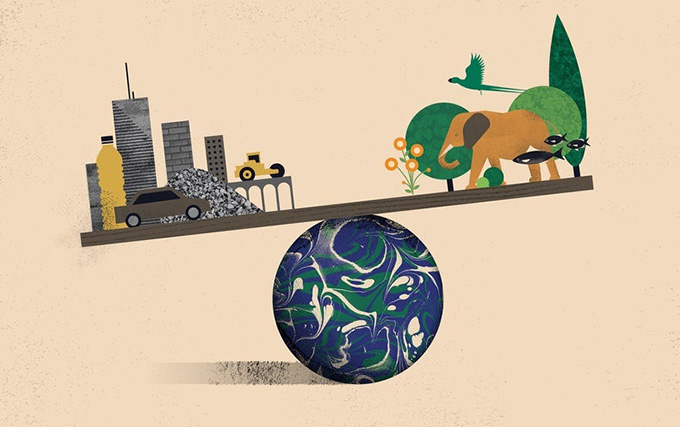 Researchers from the Weizmann Institute of Science (Israel) published, on December 9, 2020, a scientific study in the journal Nature entitled “The global mass produced by man exceeds all living biomass”. From the summary, a sentence clearly situates the subject:

“We find that the Earth is exactly at a point of intersection. By 2020, anthropogenic mass, which recently doubled roughly every 20 years, will exceed all living biomass worldwide. “

The mass of all solid inanimate objects made by man is now greater than that of living things. This result resonates as a quantitative and symbolic characterization of the Anthropocene .

Two remarks come immediately to the reading. First, looking at the environment close to a good part of the planet, this finding is not so surprising. There are more than 1 billion vehicles on Earth, several billion smartphones, computers and tablets, buildings and roads absolutely everywhere, not to mention the colossal mass of clothes … 7 billion humans, massively equipped, against 3,000 billion of trees without any possession. Little wonder then, but to have scientifically quantified it constitutes a violent signal of alarm.

The authors underline it: “This quantification from its mass, of the human enterprise gives a quantitative and symbolic characterization of the period of the Anthropocene induced by the man”.

“Quantitative” because if the scientific community does not seem shocked by this result, it is a feat to have succeeded in establishing it and making it robust after years of research. “Symbolic” because weighing the presence of man on the planet through his traces, his productions and his waste, has the same effect as weighing oneself: facing a precise and unavoidable figure, without possible negotiation.

Science education partly consists of learning to collectively manage unavoidable realities, built on established facts. “The great tragedy of science,” wrote the biologist Thomas Huxley in the XIX th  century, “the massacre of a beautiful hypothesis by an act shabby.”

Before our eyes, a change

The comparison between these two masses, that of living things and that of our objects, alerts us to the growing domination of humans on the planet. But analyzing the importance of mass in this “inert artificial” and living comparison is perhaps not so simple. Mass is not everything: by weight, the aggregate of all Covid viruses in all human bodies on the planet remains negligible. SARS-CoV-2 is not characterized by its mass, or for that matter by its energy, both are ridiculous: yet it has major consequences.

This study nevertheless comes to us to put under the nose a change. For decades, works have dismantled the vision of a planet Earth whose resources and infinite spaces would make it possible to welcome and dilute all pollution without damage. This design has probably peaked with atmospheric nuclear explosion mégabombes the middle of the XX th  century. It is only a few decades ago.

The evolution described by this study is added to the list of major changes induced by environmental upheavals to reveal that we have entered another world, that of the Anthropocene.

As the British researchers Jan Zalasiewicz and Mark Williams underline in their article published on the subject last December on The Conversation, “the science fiction scenario of an artificial planet is already here”.

Common in cinema and science fiction literature, this vision of a planet devoured by humans indeed underlies many masterpieces. She takes the form of Trantor in Isaac Asimov’s Foundation , the Death Star in Star Wars , Alpha in the adaptation of The Empire of a Thousand Planets by Luc Besson. In a chilling video analysis of the film Soleil vert by Richard Fleischer for Arte in 2017, artist Dominique Gonzalez-Foerster told us about his suffering in front of this idea.

Humanity, inseparable from the biosphere

The world of our constructions and our productions does not generate life. He is outside the biosphere. Conversely, trees feed on light energy, water and minerals. The plant produces life from the inert, and is at the origin of the food chains on which we depend. To this day, we still eat alive to stay alive and have children, we plant in the ground and we raise cattle.

The philosopher Baptiste Morizot, for his part, considers in Ways to be alive that, among the 10 million living species, ours has seceded and began to consider others as a resource. Despite our efforts in this direction, however, we do not manage to emancipate ourselves from the living. The Covid is proof of this. We will always belong to the biosphere, which will continue to invite itself without our permission into our artificial world.

The bacteria and viruses that cause pandemics evolve rapidly at the molecular level, and we helplessly scrutinize their mutations, unable to control the immense complexity of living things.

We have strived to control the living massively in simplified situations, within the framework of intensive and industrial agriculture and animal husbandry, built on chemistry and technology. But at the same time, we know that much needed pollinators are being destroyed by our very activity. However, some still dream of this control of living things as the future of humanity: manipulating living things on a large scale and in all these details, so down to the molecular level, to truly make them a resource, which would de facto make cosmetic biosphere …

The return to reality forced by the living was probably the biggest surprise of Donald Trump, who is one of these dreamers. He had probably never experienced such violent opposition to his will. Of course, there is no intention in a virus. Only chemical reactions between the virus and Donald Trump’s body. The latter is one of the men who have the easiest access to material human power, also characterized by an incredible worldwide consumption of essentially fossil fuels, of over 150,000 TWh per year .

This was not enough in the face of this virus, on the contrary. Donald Trump did not believe the scientists, the epidemic left him helpless. The imperturbable attitude of Anthony Fauci – the adviser to the American presidency on the Covid-19 pandemic – as an impeccable scientist underlined it: games of power and influence in the human world were not enough because the game was played in the biosphere.

We now have most of the established knowledge needed to look to the future. Taking up the Israeli study published in Nature , Jan Zalasiewicz and Mark Williams again underline in their article  :

“During the last twenty years, the anthropogenic mass has doubled again to be equivalent, this year, to the mass of all living things. In the years to come, the living world will be greatly overtaken – this mass will triple by 2040 if current trends continue. “_

This publication in the prestigious journal Nature , just like studies on the climate and the evolution of the biosphere, clearly show it: this artificial runaway will go fairly quickly on the scale of human generations. There won’t be a priori any big surprise, at least on the good news side. Scientific work will certainly intensify further under the growing pressure of the consequences: more and more heatwaves becoming unbearable, ever more violent storms, killer pandemics, devastating mega-fires, water shortages, and the dramatic impoverishment of living things. …

The Covid has confronted us with the brutality of exponential growth. That of the anthropogenic mass is another. Materials produced almost endlessly began to grow violently after World War II, with the first “boomers”, the generation of my parents.

Cars, planes, household machines, digital tools have invaded the world at an incredible speed. And this progression continues, at a rate that is truly unsustainable for future generations.