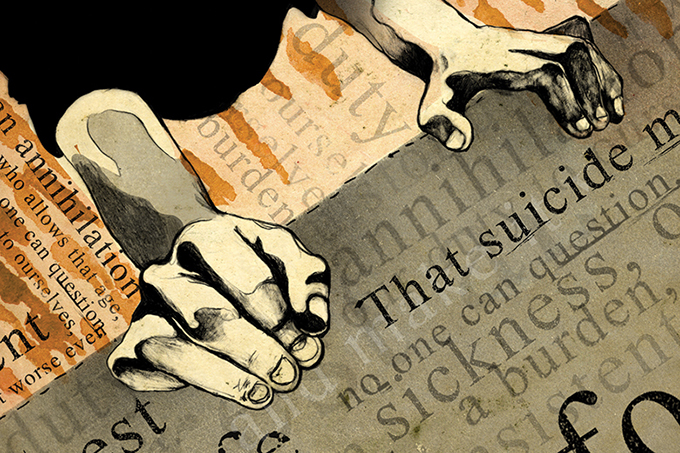 A study published in September shows that one in five US college students has had suicidal thoughts within the past year. Research from 2009 suggests that more than half have had such thoughts at some point in their lives. Suicide is the second leading cause of death among college-age students, and there are roughly 1,000 cases on American college campuses each year – an average of two or three per day.

Students have told me personally that they are considering suicide. The protocol for responding is clear: I am not trained to act as a counsellor, but I am trained to refer students to professionals on campus who can act as such.

But what about exploring the question of suicide philosophically? In my introduction to ethics course, I present students with a list of a dozen moral quandaries available for discussion during the final unit of the term. Topics include torture, cloning, abortion and whether to eat meat – the bread and butter of the sub-discipline of applied ethics. The three quandaries that receive the most votes become the focus of the last three weeks of the course.

Suicide has topped the list every single time. That’s 13 semesters in a row: 13 different groups of students, all converging on self-destruction as the moral quandary that they are most eager to sink their teeth into.

That has, at times, made me anxious. No matter what you think about using “trigger warnings” to preface emotionally charged material, students considering suicide could undeniably be affected by how the subject is presented in the classroom. While most people agree that no matter the circumstances, killing oneself is never the best option, philosophers across the ages have argued both sides of the question.

Medieval Christian thinkers such as Augustine and Aquinas argued for an absolute prohibition on the grounds that your life is a gift from God, and so is not your own to end. The Enlightenment philosopher Immanuel Kant developed a powerful secular version of this position. Suicide, he argued, violates the rational duty that every human has to preserve the intrinsic value that their living body sustains. To kill yourself is to kill the humanity in yourself, and this is impermissible.

But assigning only philosophical works that roundly condemn suicide would fail to do justice to centuries of controversy over the issue, in many different countries. From Confucius to Cicero, Seneca to Schopenhauer, countless philosophers have argued that when life becomes unbearable, suicide is a legitimate, even praiseworthy, choice.

Consider a famous example. In his 1755 essay On Suicide, the Scottish philosopher David Hume concludes: “That suicide may often be consistent with interest and with our duty to ourselves, no one can question, who allows that age, sickness, or misfortune, may render life a burden, and make it worse even than annihilation.”

Hume offers a perfectly valid defence of this position, responding to objections based on both theism and the sanctity of life. I would be intellectually dishonest – and shortchanging my students – if I did not present such arguments.

Still, I hesitated at first. In the hands of a sufficiently distraught student, convinced that life is nothing but a burden, those arguments could be dangerous. What if they made the difference between the student’s holding on and ending it all? Trying to dodge a decision, I initially assigned a pair of texts arguing contrasting positions on the permissibility of physician-assisted suicide for terminally ill patients. But my students did not take to the topic.

Instead, they appeared most engaged and eager to participate when the discussion veered to suicide in general. They shared stories of friends or family members – very few of whom had been faced with a terminal illness – who had attempted to kill themselves, or succeeded in doing so. Some argued emotionally that suicide is never the only option for someone in crisis. Some argued the exact opposite position.

In the end, I decided to present my students with both Kant and Hume. That way, I could show them a key double-edged slice of the long moral controversy and equip them with a pair of frameworks for thinking through the difficulty that they actually seemed to be confronting.

As far as I know, no student of mine has ever come closer to taking their own life as a result of our class readings and discussions. Yet it is impossible to know the full impact of our teaching – to track the effects that reverberate months and years beyond the end of the term.

Still, while we may be justified in keeping texts that defend suicide out of primary and secondary school classrooms, colleges are a different matter. Their students may sometimes be just as impressionable, just as vulnerable, as their younger counterparts. But the fact is that they are now adults, charged with thinking for themselves and navigating an increasingly complicated world in an informed way. This should make a difference to how we relate to them.

The morally legitimised suicide may be a dangerous exemplar. But it is one that college students must be permitted to encounter.