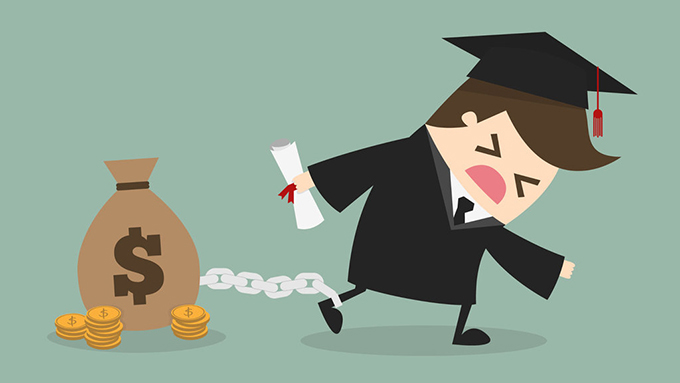 Student loan debt is around $1.5 trillion. Theoretically, the size of a loan isn’t nearly as important as the ability to pay back the loan. Alas, most of this loan debt was for fake education; when I first started this blog I covered in detail how fraudulent much of the education in higher education is, by publishing everything in my book on the subject (this basically the first two years of my blog posts). For the bulk of students with student loans, it is mathematically impossible to pay off their debts, because they were given bogus educations of no value.

When students default, things get worse: the debts simply get larger. You can’t escape student debt through bankruptcy. So, if you default, the debt increases, and obviously you can’t pay the larger debt either…it’s a death spiral.

I’ve maintained the true default rate is far higher than what is claimed (“around 2%”). The reason for the deception is the vast array of programs which cover up the defaults, as well as schools using accounting tricks. I’ve been saying this obvious fact for years, but a recent article concedes that, yeah, something is very wrong with student debt:

The Student Debt Problem Is Worse Than We Imagined
–sorry to cite something so disreputable, but backtracking the data shows it’s valid.

Let’s just get right to a picture, and then I’ll put in an extra thousand words: 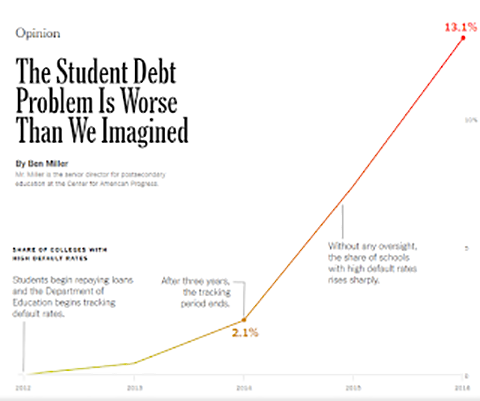 Of borrowers who started repaying in 2012, just over 10 percent had defaulted three years later. That’s not too bad — but it’s not the whole story. Federal data never before released shows that the default rate continued climbing to 16 percent over the next two years, after official tracking ended, meaning more than 841,000 borrowers were in default. Nearly as many were severely delinquent or not repaying their loans (for reasons besides going back to school or being in the military). The share of students facing serious struggles rose to 30 percent over all.

So the default rate, terrible for kids right out of school, only gets more horrible as the years go by. Again, this isn’t shocking news: you start out strapped for cash when you leave school, but can maybe get help from friends/family to keep you going for a little while. Eventually you can’t keep asking for bailouts from everyone around you, or you lose your job for a month, or get sick, or have a child, or worse a sick child…and then the death spiral begins.

The new data makes clear that the federal government overlooks early warning signs by focusing solely on default rates over the first three years of repayment.

Yeah, no kidding. Like all official numbers, what we are getting from the government is just more lies. Someone else decided to show in detail that things are much worse than “we” thought.

The secret to avoiding accountability? Colleges are aggressively pushing borrowers to use repayment options known as deferments or forbearances that allow borrowers to stop their payments without going into delinquency or defaulting. Nearly 20 percent of borrowers at schools that had high default rates at year five but not at year three used one of these payment-pausing options.

I’m shocked, shocked, to read of this. About the only people who would not be shocked are those who started reading my blog years ago.

While “struggle” is not an objectively defined word, it’s very clear that around one-third of kids tricked into student loans are being devastated by them. This percentage is far higher than the percentage of smokers who get lung cancer.

Is it not yet clear we have a problem, when higher education is doing more harm to humans than smoking?

The data also show the number of institutions with “high” default rates for that 2012 cohort — 30 percent or higher — jumped from 93 colleges from year three to 636 in year five of repayment.

So…a 500% increase in high default rate schools over a few years. Seriously, just how big does the waving red flag have to be before seeing there’s a problem here?

A comment on Inside Higher Ed bears response by me (since nobody else did):

“Two years later, after the Department of Education stopped tracking results, 636 schools had high default rates.” Who are their accreditors, I wonder?

Accreditation, as I discussed in detail in my book , does not care about student loans, and further analysis on my part reveals how they are in on the massive fraud being enacted on our next generation.

So a question about the accreditors should, by the knowledgeable, be met with mirth, but even on a specialized site like inside Higher Ed, none of the academics there know just what a huge fraud accreditation is, to the point that asking about them generates no informed responses.

In any event, the reality is our student loan defaults are sharply rising, and I promise the gentle reader, they will rise further. I don’t ask you to believe me, of course, but if I happen to be around in a few years, I’ll be happy to show the confirmation.

Even if, as I often beg, we stop the student loan scam immediately and in its entirety, the default rates will still rise for a decade or more, because these debts never clear. The government will do nothing for them as yet, but I hope that someday the warning signs will be large enough for our bloated government/country to recognize. I still, of course, advocate for the end of the student loan scam. Isn’t destroying one generation enough?