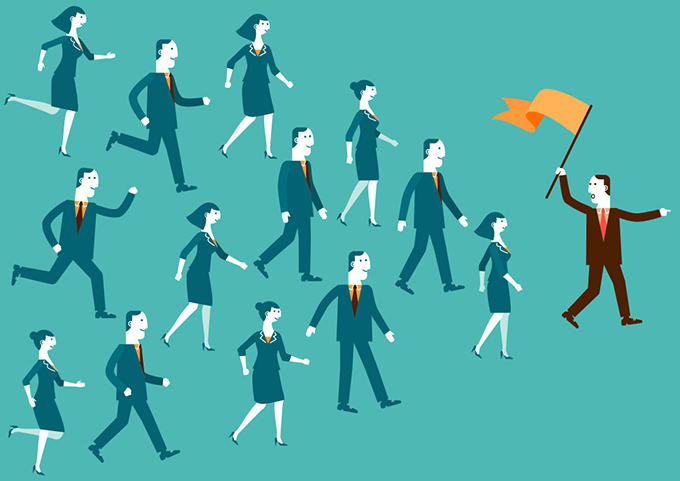 Our colleges campuses are drowning in leaders. I’ve literally taught courses where I had to report to 4 different bosses (in addition to the department head and Dean) during the semester regarding every issue that came up in the class.

It takes some effort to teach a class, but not that much (it’s why faculty often teach 4 or 5 classes a semester, and adjuncts often teach 10, so as not to starve to death on their pay). Teaching is the real work requiring actual time, but every semester or so, you do get one problem that the teacher really can’t, or shouldn’t, handle on his own.

But, that’s it. I’ve never really understood all the “extra” leadership we have now, even as I concede you really should have someone in a position of authority to step in on those occasions where an issue between student and teacher requires an impartial arbiter.

Where do they get these leaders? Well, in times past, they were drawn from faculty. Usually an older faculty member (because you needed someone with wisdom) would step in and serve as Dean. He’d get around $2,000 extra a semester, because it really isn’t a full time position, and in exchange he’d have to handle the occasional crappy situation where someone needed to do something. It was considered good money, but fair enough: you might well get put in a position of angering a colleague, so the money had to be good enough to take that risk.

Today, we pay full-time Deans around $100,000  a year to do what used to be a part time job for few thousand bucks if that much. These new Deanlings aren’t even faculty and never were, so they often have no idea what’s going on. Thing is, the job doesn’t require any particular skill, just experience as a teacher, and so the requirements for the job was simply having an advanced degree in, well, something—keep in mind, back when you drew from faculty, about the only thing all faculty had in common was having some sort of advanced degree. And experience.

But the job itself requires no particular talent. We now have advanced degree programs in Administration, so that you can “train” to be a Dean or other administrative apparatchik without actually knowing anything. I’ve examined the programs, and even the most advanced material is laughable. These programs require no effort to succeed.

And so our campuses are drowning in administrators with fancy know-nothing degrees, mostly working tirelessly to debase education in the name of growth. Adding yet another topic to the “I can’t make this stuff up” category, is our institutions of higher education think we need more of them:

The insanity here is jaw-dropping. Our campuses are breaking out in riots, tuition is skyrocketing, on-time graduation rates of 0.6% are considered successful (on the curve), administrators outnumber faculty across the country, student debt is well past a trillion dollars and…the issue is we have a “community college leadership pipeline problem”! Yowza!

With all the serious problems affecting higher ed right now (and the previous paragraph only has some highlights), our leadership is worried about the pipeline for getting more leaders at the community college level. Obviously, the real issue is we have a leadership problem, not a pipeline problem.

The “pipeline” refers to the fact that community colleges are having a tough time getting enough “leaders” to fill administrative positions. I guess hiring some of the impoverished faculty there isn’t a possibility? I can totally see why they’d have a problem if they were to hire faculty, as community colleges represent a huge source of fraud in higher education today. Faculty attached to a school don’t approve and enhance fraud like the nomadic mercenary administrative leadership we use now.

For at least the past 20 years, everyone from community college advocates to trustees has been bemoaning the increasing number of open and unfilled presidencies at two-year colleges across the country.

While one faculty position might open up every few years, ever semester sees multiple new administrative positions, so I can see how it’s hard to fill them all. They especially seem to have a problem with finding Poo Bahs. I’ve highlighted many of the frauds community college Poo Bahs committed (my favorite being the personal 5 star restaurant), but obvious fraud aside, I do ask the gentle reader who went to community college: do you remember the Poo Bah doing anything at all for your education? I know in my decade working at a questionable community college, the Poo Bah, nice as he was, was only seen on campus a handful of times, and had nothing to do with any of my students, ever.

So how can a true steward of higher education, one who knows higher education is about education, care even a little about non-education positions being empty? That should be a good thing, right, the savings of a million tax dollars a year per Poo Bah position unfilled?

North Carolina is working hard to fix a problem that shouldn’t be fixed:

So this past year, NC State redesigned its three-year doctoral degree in adult and community college education

Weird, a Ph.D. program in many fields takes 6 years or more, and 4 years is considered fast. But you can slam down a Ph.D. in “adult and community college education” in 3 years? I’m telling you, there are valid questions to be asked about the legitimacy of such a degree, or of any administrative degree for that matter…

Now the program is focused more on labor market outcomes, learning, equity and completion in an effort to make future presidents more effective,

Make presidents more effective? What? Let me explain the business plan of most community colleges: advertise as much as possible to find people who want checks. Pell Grant fraud is massive in community colleges, as it’s easy to sign up and get actual grant money in your pocket.

It doesn’t take 3 years of training to be successful at this.

Well, it didn’t used to, anyway, but nowadays we have community colleges all over the place, and the vast bulk of our citizenry has already shown up on campus to get the free checks. Heck, we have bands of nomad “students” wandering from campus to campus to get these checks, because admin doesn’t care about the fraud. There are so many such colleges that the market is saturated, all they can do now is cannibalize each other, as campuses within 10 miles of each other have no choice but to fight to take each other’s students. Is this really what higher education is supposed to be about? They race to offer to the most convenient, easiest, fastest coursework possible.

That’s what being a community college leader is today: be effective by committing greater fraud than the other leaders…and now you can get a Ph.D. in this “skill” in a mere 3 years. Neat!

“Every decade we say there’s a leadership crisis, but it almost deserves that designation now,” O’Banion said. “The job has become too difficult…

So, uh, you were crying wolf for 10 straight years before, but now you say it “almost” is a problem now? Seriously, do these people listen to themselves?  That said, I concede the job is difficult, but only for the reason I’ve touched on above: our country is overwhelmed with the fake schools plundering the tax dollars. The reasons given in the article are laughable, but I’ll highlight the most hysterical:

Faculty unions are in control of a lot of places.

Really? Where? I’m sorry, but this is insane. If faculty unions had any power, any power at all, this might be a concern, but honest, if faculty were “in control” tenure wouldn’t be nearly dead and there wouldn’t be food banks specializing in feeding your average college teacher because the pay is so low…like there are today.

The article drones on about the “almost” problem , but the comments section laughs at how idiotic it is. A few highlights:

Seriously, a Poo Bah can make hundreds of thousands a year at even a tiny college, and there are no particular skills needed. Just advertise the position, I’m sure you’ll get applicants. In particular, consider hiring faculty to the position, get someone who will serve not as a plundering leader out to debase the school as quickly as possible, but someone who has invested years of his life in the school, and doesn’t want the place to be considered a joke. What a silly idea!

This feels like a solution in search of a crisis. My community college just hired a new president and we had over 200 applicants (reducing the pool of highly qualified down to around 70). There are plenty of VPs and Deans out there, along with many “business leaders” that local Boards of Trustees seem to like to hire more and more. Most Dean-level (and up) administrators already have doctorates, usually in their current subject area, whether academic, student services, etc, so I’m not sure who the target audience is for this program.

Yeah, no kidding. Times are tough right now, lots of folks would be interested in a $250,000 a year job where you advance and get bonuses no matter how badly you screw up, and get a golden parachute if they fire you, or even if you quit.

Seriously, please, no more leaders for higher education. The system is at its breaking point already trying to support the leaders we have…