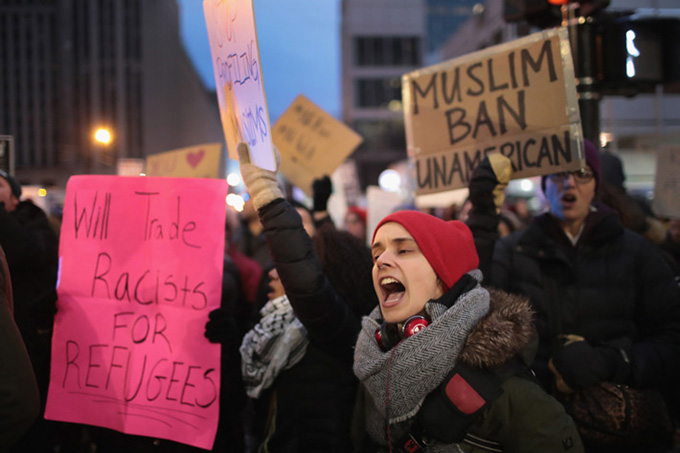 In Game of Thrones, the academics (the Maesters), mostly stay out of politics. They have their university (The Citadel) and they send scholarly representatives to every significant castle in Westeros, to give politically neutral advice and knowledge. I know, it’s a fictional world, but it’s not too far from the real world, where the universities, at least in the recent past, stayed out of politics.

It was a good policy, considering the university’s mission of education and research. Politicians/rulers come and go, but knowledge is eternal, and should be preserved. Picking a side in a political battle could lead to an institution’s destruction, although in the modern world that just means de-funding (at least, so I hope).

Now, considering how much money flowed onto campus during Obama’s reign, it’s understandable our campuses would side with the Democratic party when the Dems were in power but…the election’s over. Continuing to campaign against Trump is idiotic for our universities, because so much of our money comes, directly or indirectly, from the Federally backed student loan scam under his control.

But why let idiocy get in the way of partisanship?

Before going further, I should mention this isn’t just at the Poo Bah level. My own campus had a special “Christmas Edition” magazine insert into the school paper. Despite all the cheery decorations of holly and such on the cover, the editorials inside the Christmas edition still had no trouble calling Trump a racist, homophobic misogynist, among other names, and calling those who voted for him much the same, and I’m not paraphrasing much here. And that’s when the paper is filled with the Christmas spirit…I’d hate to see what names they’d use the rest of the year (I don’t read the campus paper regularly).

As per the last election, around half the country support Trump. How stupid do the editors at the school paper need to be to not see a problem with insulting half their readership? I would have written a letter to the editors, protesting insulting their readers so, but I saw little need to risk being fired for speaking out…

Anyway, back to today’s topic where four dozen Poo Bahs, obviously not living in fear like typical academic workers, felt the need to send a “searing” letter to Trump for, well, appealing to half the people in the county and keeping his campaign promises to them (admittedly, this is over-the-top wacky behavior compared to previous presidents).

What was their issue?

“This action unfairly targets seven predominantly Muslim countries in a manner inconsistent with America’s best principles and greatest traditions. We welcome outstanding Muslim students and scholars from the United States and abroad, including the many who come from the seven affected countries…This executive order is dimming the lamp of liberty and staining the country’s reputation. We respectfully urge you to rectify the damage done by this order.”

It’s so weird how the mainstream media has presented Trump’s “ban.” It’s not actually a ban, it’s a moratorium (i.e., a short term event). It’s also not targeting Muslims, as the countries involved only represent a small percent of the world’s Muslim population (even the Trump-hating Post admits only about 90,000 people are affected, out of 1.6 billion Muslims…roughly .005%). During WW2, the US was pretty wary of accepting refugees from Nazi Germany. Would it have been called a Christian ban if we didn’t accept refugees from a country we were bombing back then?

His “ban” targets 7 countries, the same 7 countries Obama targeted in 2016 (and did so similarly in 2015, and again similarly in 2011). Why didn’t the Poo Bahs give this searing letter to Obama, when he targeted these countries multiple times? Is there something magical about this year that makes such things “unfair” as they say?

Trump’s moratorium targets refugees, not established green card holders, or holders of other official documentation. Do the Poo Bahs not know these things?

Now, I grant the implementation of this ban inconvenienced quite a few people, and I sure don’t support doing it this way. Truth be told, I think the US should stop bombing these countries, as it’s certain US bombs are creating quite a number of these refugees…I’m not suspecting anyone in Trump’s cabinet can see this point of view, however. So, if we’re going to bomb these counties, then, yes, it’s prudent not to openly allow people with good reason to hate us to just come to the US—the moratorium is sane, and consistent with our current policies that are not at war with us, as evil as they are. It beats the insanity of previous administrations, I concede.

The Poo Bah’s letter, however, seems to be pretty ignorant. “America’s best principles and greatest traditions”? Wait, what? Outside of Western Europe, the United States has had a pretty strong tradition of restricting access to the country to immigrants from elsewhere (in the 19th century, Chinese immigrants in particular were quite restricted).

Yes, Muslim scholars, some 1/200th of 1% of them, are now having difficulty coming into this country, and yes, that’s unfortunate. It’s funny, the Poo Bahs are forever trying to cram internet classes on our students, so, they do know about the internet. Can these scholars just get by with the internet for the 90 days the moratorium is in effect (assuming the courts don’t shut it down completely)? Skype and e-mail aren’t that expensive, after all. This letter just seems a needless, pointless risk.

You can read the letter in full, and it’s not quite as “searing” as the media tried to present it (the story of this letter kind of died, since the mainstream media right now is going nuts being outraged over every single thing our extremely active president is doing). I’m just so puzzled why the Poo Bahs felt the need for this protest. One commenter points out the risk they are taking:

Under US Law, these colleges have received federal funding which falls under “grants.” The Colleges, as well as the Sanctuary Cities, are under obligation to uphold all US Federal Laws to receive this federal funding. Failure to completely comply with the Federal Laws requires the US Government to rescind all Federal Funding under these “grant” laws. The President stands empowered under US Law to pull the federal funding from anyone receiving such, is not fully compliant with US Federal Law. These colleges may well desire to re-consider their stand in opposition to the President as the Government is required to pull all of that funding under US law.

Now, the universities aren’t disobeying Trump’s rule, just protesting. I guess I could commend the Poo Bahs for their courage, but the above comment is why our universities really shouldn’t be taking sides. It’s clear this “searing letter” is just more Democratic partisanship echoing the media echo chamber on this Trump “outrage.”

Bottom line, this moratorium will hurt scholarship regarding 1/200th of 1% of Muslims, for less than one semester. This is a bad thing, and worthy of a protest…I don’t like it at all that the President can inconvenience people who have committed no crime. That said, the question keeps coming back to me:

Why are none of our Poo Bahs clever enough to understand that dropping over 25,000 bombs during the last year of Obama’s reign did far more to hurt humanity than this travel moratorium?