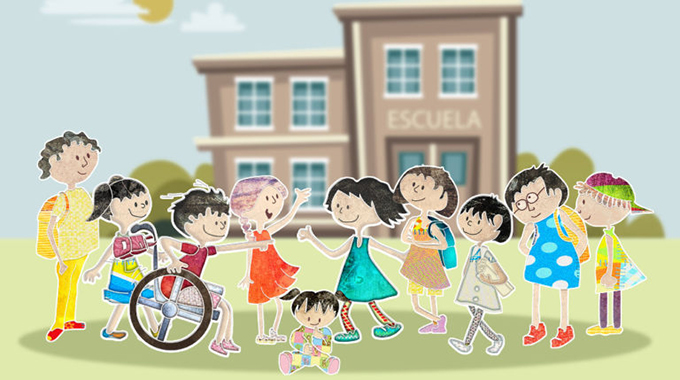 Pupils designated as “with special educational needs” are children who “find it significantly more difficult to learn than the majority of children of the same age when they are in a particular situation or suffer from a handicap which prevents or hinders them in their learning. Their schooling is a major concern for all education systems, as recalled by the fourth objective of the 2030 Agenda defined by the UN.

To deal with the heterogeneity of students, countries have adopted different models implying that the definition of inclusive education and its implementation vary greatly. In France, inclusive education as it is currently advocated is the result of a long process driven both by a regulatory and legislative framework specific to France but also by international commitments (for example, the Salamanca declaration In 1994). The concept as such was used in France, for the first time, in the law of July 8, 2013 on orientation and programming for the refoundation of the School of the Republic.

The conception of inclusion and its implications for the school institution have thus evolved over time. Today, even if the majority of teachers seem to be in favor of it, they still experience difficulties in implementing it . These difficulties may in part be linked to the fact that, due to numerous developments, the concept of inclusive education lacks consensus and remains, even today, misunderstood by education stakeholders .

From integration to a universal pedagogy

The principle of integrating pupils with special educational needs appeared in the orientation law of June 30, 1975. This principle referred to the idea that the latter can learn in the ordinary course and then asked them to make efforts to adapt. to the school and its functioning (even if assistance could be provided to them on an ad hoc basis). Pupils for whom the deviation from the norm was not too great were likely to be integrated into a regular class; the others are then directed to separate classes or establishments.

Gradually, over the years, integration gave way to inclusion . These pupils thus benefited from an increasingly elaborate level of participation, moving away from the physical integration of 1975, its minimal form, to reach an administrative integration from 2005, its most advanced form. These different developments are also found in research work around the world. Thus, Kerstin Göransson and Claes Nilholm , in 2014, in a review of this academic work, showed that inclusion there can be defined as:

This last form has been trying to build itself in France since the law of February 11, 2005 for equal rights and opportunities, participation and citizenship for people with disabilities. With this law, it is no longer a question of integrating or re-integrating pupils with special educational needs since they are not excluded from the school system. In this perspective, they are educated in ordinary classes and teachers are encouraged to adapt their methods and materials to their needs.

Inclusive education therefore proceeds from a double adaptation. On the one hand, it is always expected of the pupil, whoever he is, that he integrates the school standard, the knowledge identified in the reference framework of skills. On the other hand, the school must, according to the needs of the pupils, adapt the approaches, the methods and/or the teaching aids to enable learning.

Current recommendations for inclusive education go beyond this concept of inclusion, in particular with the idea that lessons must be, from the outset, accessible to all. Thus, teachers are no longer encouraged to build a course adapted to each student with special educational needs (and therefore to individualize the materials in some way) but rather to design, upstream, sessions, materials or methods that meet to everyone’s needs.

In this perspective, pupils with special educational needs should no longer be the object of exclusive and/or special attention; the teacher must be more attentive to the barriers to everyone’s learning. Consequently, the proposal to students of different teaching methods is recommended to respond to the diversity of students. This approach, inspired by architecture, is called Universal Design for Education .

In the field, a variety of approaches

Research that we have carried out with Anne-Laure Perrin (article to be published) has confirmed these results in the French context: not only do French teachers not represent the notion of inclusive education in the same way, but their approach still refers to the integrative model (47% of them refer to definitions A and B given above).

This prevalence of the integrative model among teachers can also be reflected in some of the reasons they cite for the implementation of inclusive education or even some concerns that teachers may have. Thus, for example, some teachers think that the inclusive school is set up to save money for the government, “to ease our conscience” or in response “to the lobby of parents of disabled children”.

Also, some teachers may feel that teaching students with special educational needs may be detrimental to the progress of other students . However, these projections and concerns are not representative of what inclusive education is and should be and we believe should alert the various education stakeholders.