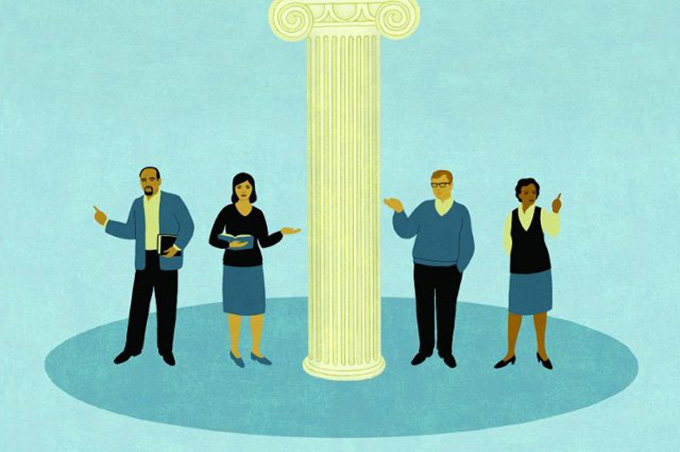 In the Communist takeovers of the 20th century, the shapers of public opinion were targeted for either control or elimination. This is understandable, as socialist ideas generally can’t stand up to any intelligent challenge…getting rid of people with an opposing point of view, particularly those who can express that view to the public, is thus a necessary part of any transition to completely centralized state power.

There are three major categories of the public: children, young adults, and adults. The last election showed that the control of the public schools/higher education/media (the main ways to influence the public as children/young adults/adults) was simply not complete enough to allow a candidate dedicated to the all-powerful state to simply walk into office. So…the control is not yet complete in at least one of those categories. Changes need to be made!

I guess the control over public schools is complete, nothing new is happening there since the election.

Recent “changes in policy” are choking out YouTube personalities giving an alternative point of view of things, and Facebook and other media are likewise doing what they can to silence opposing voices. Mainstream media keeps doubling down on the hate campaign, despite repeated backfires.

So we have control of kids, and adults.

And what of higher ed and control of young adults?

Because we know history, academics sought to protect themselves from being targets long before the election, and the primary protection was tenure. Now, I grant a bullet to the head trumps tenure every time, but we’re not at that stage yet.

In higher education, the control is already pretty strong, as administrative power is extraordinary, while faculty are mostly powerless temp workers now. That said, there are still tenure-holding faculty, some of whom hold those alternative points of views that need to be silenced.

I’ve documented many of the ways to get around those tenure rules, to eliminate faculty who would have been executed if the control were complete. Most of the time the new methods don’t hold up in court, though it takes years to settle things, long enough that our aging tenured faculty usually walk away rather than fight.

The long term plan here is just to not award tenure. Each year, the average age of a tenure holder goes up nearly 1 year, because so few new tenure positions are awarded; the average age of a tenured professor is 55 now, to get some idea of how much longer we’ll have tenure as a part of academia. The last election showed that the timetable needs to be accelerated, those who want to silence intellectuals are unwilling to wait another 20 years until “the end of history,” and so broader methods are coming online.

The latest maneuver to silence opposing voices in academia wholesale is both ridiculous and, unfortunately, perfectly legal:

The title is a bit misleading, so a snippet to clarify:

The State judge flat out dismissed the case of skullduggery by the State school(s). Yeah, shocking, I know, but it did take 4 years of fighting for the professor to get to this point.

So, what happened? In short, two State schools “merged” into one State school. I’ve been a part of these mergers, and it’s amazing. Faculty are told that mergers will increase efficiency, help students, and lower tuition, but, somehow, no administrator is fired (less efficiency), classes get larger (hurting students), and tuition rises much as before (because all the administrators get pay raises for being part of a larger institution…I wish I wasn’t making this stuff up).

Oh, and faculty get fired—the classes get larger for a reason, after all.

The students at the “old” State schools immediately transferred to the new State schools, no problem, and all their credits as well (I should note this is in explicit violation of accreditation rules for transfer to new schools, and in violation of policy of every school I’m aware of, and I’m aware of many). It’s curious the faculty’s lawyers don’t know this explicit rule from the school’s accreditor:

3.6.3 At least one-third of credits toward a graduate or a post-baccalaureate professional degree are earned through instruction offered by the institution awarding the degree. (See Commission policy “Agreements Involving Joint and Dual Academic Awards: Policy and Procedures.”)

But the tenured faculty are removed, despite their contracts. Awesome, right? And this is now established as perfectly legal. These guys devoted their lives to the institution, and now are being silenced wholesale, with full approval of our court system, because apparently just changing the name of the school is sufficient to shred a contract. That’s how it works with all other contracts, right?

The precedent here is clear enough: all you need do now to silence any opposing voices on campus is just change the name of the institution, and thereby instantly void any contract. Today, we still have little islands of sanity on most campuses, trying to explain that mass murder and trusting your Poo Bah are woefully dangerous methods of reaching the end of history. Those little islands are often populated, and led, by what remains of the tenured faculty—any non-tenured faculty on those islands have long since been kicked off by admin.

I grant that this change-name-lose-tenure switcheroo isn’t the same as a bullet to the brain, but, if the control is ever complete, I suspect we’ll see such. Our Department of Homeland Security (note: this is not the U.S. Military) purchased well over a billion bullets, more than enough to kill off the academics…and I suspect quite a few other Americans, too. Seriously, the entire population of this country is well under one billion, so it’s fair to consider which Americans this Department, which can only operate on U.S. soil, is planning to shoot.

All this ammunition was acquired perfectly legally, so it’s all good, right?