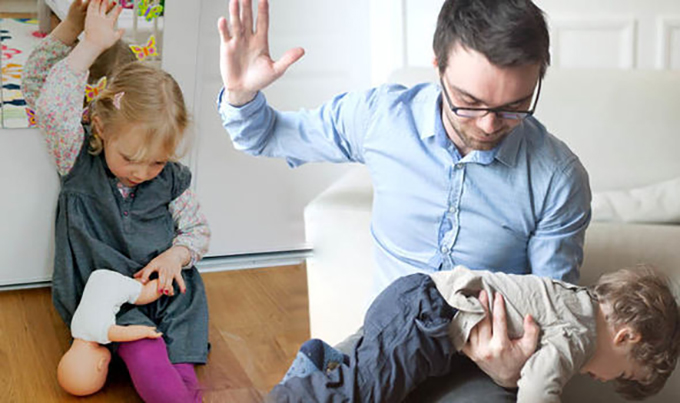 Today, if a parent smacks a child mid-tantrum in the supermarket, they are likely to get looks of disapproval from other shoppers. Smacking is not as socially acceptable as it used to be.

Recent research shows only 15% of people aged 16-24 view physical discipline as necessary to properly raise children. This compares with 38% of people over 65.

But it still happens – and it is very harmful to children. So we need to help parents find alternative methods of discipline.

In 2017, the royal commission into child sexual abuse recommended a national study on how common child abuse is in Australia. Early findings released last month revealed 61% of those aged 16-24 said they were physically hit for discipline four or more times during their childhood.

The research also found those who were hit had almost double the risk of depression and anxiety. This partly because those who had been smacked as a child may have also experienced other forms of mistreatment, such as harsh parental reactions, neglect or insufficient support.

This fits with other research showing negative consequences if children are smacked or hit. A 2016 review of more than 70 international studies showed it was linked to reduced compliance with parents’ instructions over time, children having increased aggression and antisocial behaviour, mental health problems, and lower self-esteem.

In adulthood, it is also linked to antisocial behaviour and being either a victim or perpetrator of intimate partner violence.

Currently, the use of reasonable force for the purpose of discipline in the home remains lawful under criminal law provisions or common law principles made by courts. This is despite the fact it is illegal in most Australian states and territories in other settings such as schools, or between adults – where it is classed as assault.

Many countries are changing their laws because they understand the harms and because it is a violation of children’s right to live a life free from violence. Already, 63 countries have banned corporal punishment for children, including New Zealand, Sweden, Denmark, South Korea, Wales, Scotland, France and Japan.

Parenting and family researchers have long been pushing for an end to corporal punishment in Australia as well.

But this is not just about law reform. Raising kids can be challenging at the best of times. Kids misbehave or may not be in control of their emotions, and parents need to provide guidance to their children about what is appropriate behaviour.

The prevalence of #corporalpunishment in Australia – early data from the #ACMS study was released at AIFS @FamilyStudies conference 16 Jun. Read more about the findings ⤵️⤵️⤵️https://t.co/dCeCxUqtjc

The good news is there are evidence-based alternatives to smacking. These are strategies that aim to help children understand what behaviours are expected, teach them to work through their feelings and learn how to repair a situation or solve a problem.

These approaches lead to much better outcomes for parents and children, including more realistic expectations on the part of the parent and a better relationship between the parent and child. They also improve a child’s well-being and mental health.

So, what are the alternatives to smacking?

Here are some approaches to consider with your child:

1. Give clear and consistent limits about what you expect

Children need to know how you want them to behave and for this to be clear. An example might be: “It’s not OK to hit your brother” or “You can’t take lollies off the supermarket shelves without asking me first.”

2. Manage your own emotions

Anger is contagious, so try not to lose your temper in front of your kids. Instead, pause before you react: take three deep breaths, have a cold drink of water, or step outside for a moment.

3. Be a good role model for your child when you don’t manage situations well

Parents need to show how they manage their own emotions – or make amends when they act in less-than-ideal ways. Parents should be brave enough to say “I’m sorry I got angry and shouted at you. I wasn’t very patient.”

4. Explore the emotions behind behaviour

Kids can be uncertain or confused by their emotions. So, try and help them understand their feelings. This could include saying something like “I can see you felt left out and jealous”.

Also validate their emotions because this helps them feel accepted by you while learning to understand and manage their feelings. For example, say “It’s difficult when this happens”.

When they are calmer, you could explore other feelings behind their actions.

This is about separating feelings (jealousy, frustration) from behaviour (hitting). All feelings are okay, but not all behaviours.

5. Resolve problems when everyone is calm

No one can think, talk or listen properly if they are upset. Take time to do some breathing or something soothing with your child. Or perhaps they need a run around to release strong feelings.

When everyone is calmer, help them work out the solution or next step. This teaches them how to resolve situations, repair relationships and take responsibility for their behaviour. You might say something like, “It can be embarrassing saying sorry to someone you’ve been angry with. What do you think might help?”

If something is broken, children might need to fix it, use pocket money to replace it, or explore what might make the situation better.

Children need family rules about behaviour and it can be useful to discuss what should happen if these are broken.

Getting discipline right is not easy as a parent, grandparent or carer. And this can be especially difficult if you were brought up with smacking (and have older relatives telling you it is “fine”).

It’s worth remembering a slogan frequently used when we talk about an end to smacking: “children are unbeatable”. They deserve the same protection from violence as adults.

Author Bios: Daryl Higgins is Professor & Director, Institute of Child Protection Studies at the Australian Catholic University and Sophie Havighurst is a Professor at The University of Melbourne