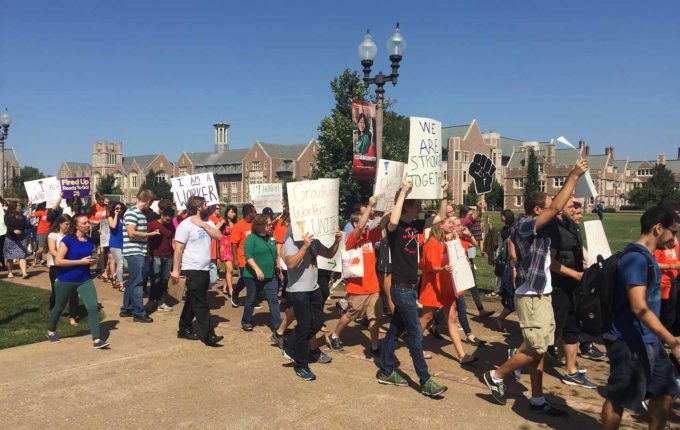 That refrain says a lot about university workers, whether you are a researcher, lecturer or professional staff. We may have different functions in our universities but most of us are here because we believe in the transformative power of teaching and research for a well-functioning society.

I thought about this phrase during my time as co-founder of a University of Melbourne Casuals Network. It was hard going, but we went on to collectively win millions in backpay for casual tutors, who were being paid piece rates for marking papers. I think about this phrase now as the Branch President at the University of Melbourne, as I organise professional staff who have been hit with wave after wave of redundancies.

Being in a mission-driven role in these pandemic times is grinding us down. Across the US, Australia, UK, and Europe, university executives have used the pandemic as a rationale to make deep staff cuts. They have decimated our sector through the sheer number of jobs lost. Rampant job insecurity, toxic workplaces, and shark-tank competitiveness for diminishing research funding are the norm whether you’re in a university in San Diego, Berlin, Melbourne or Madrid. As we know too well, these issues were there before the pandemic.

The elephant in the room is the critical role that unions can take to course-correct our broken universities (and the governments that do not fully fund research and teaching). If we think of work-related stress factors common in our universities – bullying, anxiety, high workloads – many of these factors stem from and are symptoms of widespread job insecurity. Job insecurity forced on us from university chiefs who believe investment portfolios are more important than secure jobs.

A unionised workforce can spark systemic change. A union is vehicle for collective workplace organising that can lead to change including improved university governance, increased federal funding for research and ultimately lead to greater job security. Unions build their strength through organising. Organising means activating staff who are not union and empowering those who are. Organising focuses on building union density and building worker power to achieve systemic change often through direct action. Organising is making a comeback.

Two pivotal events in the past three years highlight the critical role of unions and union organising in the university sector.

Australian university casualised workers won big on wage theft. Organising efforts amongst the most insecure workers in the Australian academy – casual and long-time academic tutors – hit their zenith in 2020. Close to a dozen prestigious universities were implicated by direct action led by casual tutors and long-time casual workers in the National Tertiary Education Union (NTEU). The backpay wins were measured in the tens of millions of dollars. They came off the back of rank-and-file leaders gathering evidence on wage theft, writing Senate submissions, occupying offices and getting stories published in the national media. Casual workers took charge of organising these campaigns (which are ongoing). Often they organised these campaigns without the approval of union leadership, who eventually came on board to support their campaigns.

16,000 student researchers in California won the right to bargain. Graduate student researchers across the US are organising to improve their working conditions and increase their stipends. Even before the pandemic, graduate worker stipends were nowhere near enough to cover living expenses. Similar to Australia, US graduate workers and teaching assistants, the most insecurely employed research cohort, have been at the vanguard of calling for better working conditions, cost of living adjustments and building solidarity on social justice issues. At the University of California, graduate student researchers forced the administration to recognise their democratic choice to unionize.

Organising makes the mobilising, lobbying, and advocacy that much easier if the focus of union work is at the work site.

What you can do

1. Building a union begins with you.

Join your union. If not now, when? Whether you are a PhD student, a student services manager, or a medical researcher on your 12th contract – join. The US and the UK are having a surge in union activity from universities to Starbucks and Amazon warehouses.

2. Now that you have joined.

You might be reading this and thinking, “I don’t have time to be active.” No problem – multi-task your union work and your career. Invite union representatives to sponsor your next Shut Up and Write session, invite union representatives to your next early career drinks night. If you’re a senior researcher, ensure the union is included in your induction event for new staff or has a seat at the table in faculty meetings.

Be visibly union – in your lab, on your email signature, in your socials, at your desk. Too often members are afraid to show they are union for fear of retribution. If we all showed our true union colours, how much easier it would be to overcome this hurdle.

Practice solidarity with other unionists. If you are research only, don’t just stand around wondering what the fuss is all about when graduate workers or professional staff have an action. Show solidarity by donating to strike funds and participating in lecture boycotts or professional strikes.

Heading to that international conference to build research collaborations? Great! Chances are the Germans, Brits and Californians in your field are unionising the living daylights out of their discipline. Take the time to build union connections as well, and talk international tactics.

In the US, Australia, and the UK, we are seeing union incumbents challenged by rank and file members that want an organising union. Participate in renewing union democracy by researching the long term incumbents. What have they done to grow the union? How are the most vulnerable workers included in union democracy? What’s their plan to build union power on the ground? Vote accordingly. Better yet – run yourself!

If your passion is higher education and, what are you waiting for? Join your union.