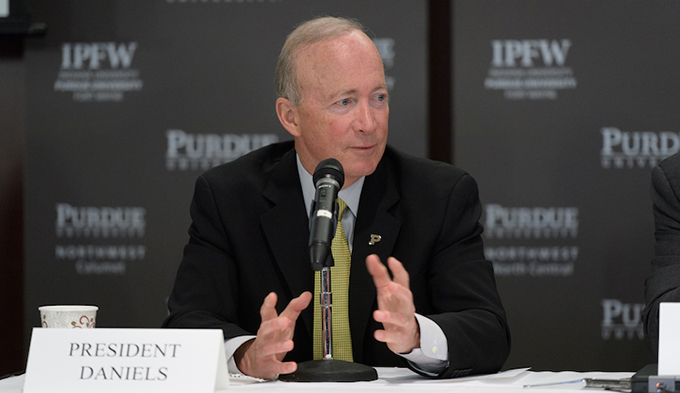 In a surprise move last week, Purdue University announced its intention to acquire for-profit Kaplan University. If approved, Purdue will become a major player in online education. Its president, former Indiana Governor Mitch Daniels, described the takeover as a “third dimension” to Purdue, adding Kaplan to its research flagship and regional campuses.

Mr. Daniels argued that before the acquisition Purdue had little presence in online education and had “basically been a spectator to this growth.” Kaplan University has 32,000 registered students, but enrollment has been falling for several years. Kaplan’s students are heavily skewed toward military veterans, lower-income students, and members of minority groups, including first generation college students. Their average age is 34, a sharp contrast with the 20-year old average age at Purdue.The deal has a number of parts. For Kaplan the deal offers a profitable way out of a battered reputation and declining enrollments.

Deal Could Be Game Changer for Purdue

For Purdue, the deal may be a game changer if the right puzzle pieces fall into place. Purdue’s total enrollment will grow from 30,000 to 70,000, with 30,000 registered online. The new online initiative will receive no state funds and rely solely on tuition and donations for support.

Under the terms of the deal, which would create a new public university, Kaplan students, academic programs, 15 campuses and learning centers, and academic staff of about 3,000 will become part of Purdue. Kaplan, Inc., the parent company (a part of Graham Holdings that for decades owned the Washington Post), will continue to provide the technology, marketing, admissions, and financial aid, as well as other back-office operations. In return, Purdue will pay Kaplan 12.5 percent of the online program’s revenue, but only after Purdue and Kaplan have both recovered their direct costs.

The deal could stretch 30 years. Purdue will also be guaranteed a minimum of $10 million annually by Kaplan before Kaplan is reimbursed for its direct costs or receives 12.5% of any additional revenue. Kaplan will no longer be subject to the “gainful employment regulation,” that scrutinizes career-focused programs that load debt on to students relative to the income that they will earn.

Many independent analysts suggest that the deal makes sense, although the move also has its critics. For Purdue, the structured deal permits the University to move quickly and efficiently into online education without developing the technology, staffing, marketing, and enrollment start-up costs that it would otherwise incur. It will now compete at a scale and in the same market as other large non-profit online education programs like Penn State. The deal will also improve the national and global reach of a major research university that is best known for its highly regarded science and engineering programs.

Purdue will need to undergo a series of regulatory, accreditation, and internal administrative hoops before the new arrangement takes hold. Mr. Daniels estimates that this process might take several months.

The move by Purdue will be watched carefully across higher education. It represents a startling realignment of the for-profit and non-profit community, in which one of the lead players has an established reputation, but is weighted down by the baggage attached to the highly public criticism of large for-profit educational providers. On the other side, Purdue’s president is perceived as a maverick change agent whose approach may not be received well by Purdue’s faculty who were not part of the acquisition discussions.

Is Purdue-Kaplan Deal the Higher Ed Partnership of the Future?

Beyond the internal dynamics, there are a series of important policy questions to address. If we accept the premise that higher education will evolve at a faster pace because of the accumulated pressures – especially on revenue – that its institutions face, is it likely that the Purdue/Kaplan arrangement is an outlier or instead a prediction of the kind of tectonic changes higher education is likely to face?

In this respect, Purdue provides an interesting case study. What is most intriguing about Mr. Daniel’s approach is that he understands that sustainable growth in the University’s future could not be built off tuition, state appropriations, and debt. Purdue is a research university but also a state institution committed to educating Indiana’s citizens. It must think strategically in a league in which other large research universities play.

A Follow-the-Money Moment for Purdue

As such, this is a follow-the-money moment in which the Purdue brand goes global and the financial underpinnings of what Kaplan will provide pay for the move to online education. Done correctly, the new arrangement will likely improve Purdue’s competitive standing among its peers. If the test fails, then Purdue will become the poster child for why non-profits and for-profits can’t mix.

Despite the uncertainty, Purdue earns an “A” for the effort it has made to move strategically by searching for new resources under new terms and through new arrangements to meet its strategic goals. It left the old understandings and financial foundation for the flagship and branch campuses untouched. Now, we’ll watch to see if big chess moves can match ambition to reality.