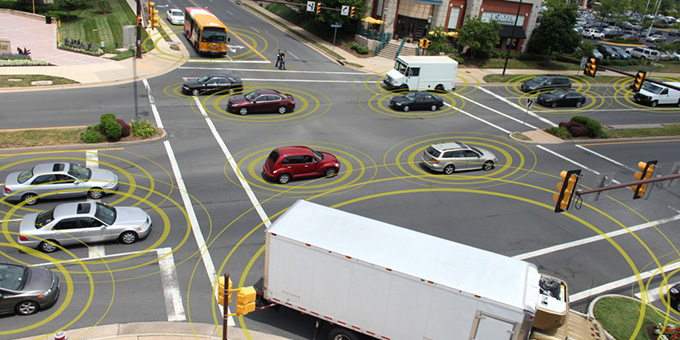 Trials of autonomous cars and buses have begun on the streets of Australian cities. Communications companies are moving to deploy the lasers, cameras and centimetre-perfect GPS that will enable a vehicle to navigate the streets of your town or city without a driver.

Most research and commentary is telling us how the new machines will work, but not how they might shape our cities. The talk is of the benefits of new shared transport economies, but these new technologies will shape our built environment in ways that are not yet fully understood. There’s every chance that, if mismanaged, driverless technologies will entrench the ills of car dependency.

As with Uber and the taxi industry, public sector planners and regulators will be forced to respond to the anger of those displaced by the new products the IT and automobile industries will bring to the market. But can we afford to wait?

Three distinct groups are giving form to the idea of driverless vehicles. Each has its own corporate proponents and target markets, and its own, often competing, demands on citizens, regulators and planners. Each will make its own demands on our streets and public spaces.

First, the traditional car makers are adding “driverless” features to their existing products. They have no compelling interest in changing the current individual ownership model. Their target consumer is someone who values private vehicle ownership and enjoys driving.

These carmakers’ challenge is to win over drivers sceptical about “their” car doing things they can’t control, whether that is behaving differently in traffic or performing unescorted journeys. But, if successful, these new cars will make driving easier and so encourage more travel and ever-expanding suburbs.

US start-up company nuTonomy launched driverless taxis in Singapore in 2016.

Second, cashed-up IT disruptors like Google and Uber see new types of vehicles and new patterns of ownership as the basis for new transport economies. They want lightweight, utilitarian “robo-taxis” owned by a corporation and rented by the trip. Travellers will use phone apps or their next-generation successors to do this. This, in the jargon, is “mobility as a service”.

These companies’ ambition is to carve out a large niche in competition with private cars, taxis, conventional public transport and even non-motorised transport. Fleets of shared vehicles in constant circulation can reduce the number of individually owned cars and, in particular, the need for parking.

In some circumstances, this may support more compact urban forms. But while sustainability or social objectives might be part of the pitch, the profit motive remains dominant.

Savvy operators understand that new vehicle technology is only valuable if it is integrated with traditional public transport services and with cycling and walking. This means central coordination. Vitally, it also requires control of the information platforms needed to provide multimodal mobility.

Such levels of planning and regulation conflict with Google’s “disruptive” free-market ambitions. European operators, who are in a more powerful position in economic and social life than their Australian counterparts, are already mobilising for this contest.

Whatever the technology, transport needs space

Many claims for the benefits of driverless technologies rely on the complete transformation of the existing vehicle fleet. But the transition will not be smooth or uniform. Autonomous vehicles will face a significant period of mixed operation with traditional vehicles.

Freeways are likely to be the first roads on which the new vehicles will be able to operate. Promoters of these vehicles might join forces with the conventional car lobby to demand extra lanes. This would dash the hopes of many that driverless cars will lead to reduced space for mass movement of cars.

After the freeways, the next objective will be to bring driverless cars, trucks and buses onto city streets. This will require complex systems of sensors and cameras.

The ambition is to allow all users to share road space much more safely than they do today. But, if a driverless vehicle will never hit a jaywalker, what will stop every pedestrian and cyclist from simply using the street as they please? Some analysts are predicting that the new vehicles will be slower than conventional driving, partly because the current balance of fear will be upset.

Already active travellers are struggling to assert their right to the streets of Australian cities. Just imagine how much worse it would be if a dominant autonomous-vehicle fleet operator demanded widespread fencing of roadways to keep bikes and pedestrians out of the way.

The presence of driverless cars cannot alter the fact that space for urban transport is severely constrained. For travel within and between compact urban centres, we will need more and better high-capacity mass transit as well as first-class conditions for walking and cycling.

The integration of conventional public transport networks with shared autonomous vehicles, large and small, offers many opportunities for a much improved service. But that will happen only if this objective is the major focus of investment, innovation, planning and regulation.

Researchers and policymakers need to move rapidly to gain a holistic and systematic understanding of the multiplicity of driverless-vehicle scenarios and the potential harm that some might contain. The technologies are not an unalloyed good, and governments will need to do more than just be “open for business”.