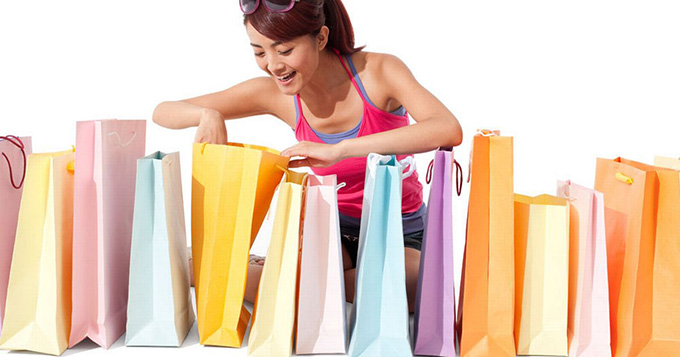 Every parent dreads the day their child asks where babies come from. But perhaps we should be more concerned about how children learn where other things come from. What do we say when they ask where we get the clothes we wear, the furniture in our homes, the food we eat?

Considering the volume of advertising of all kinds of products designed for and marketed directly to children – everything from toys, to cereals, to fashion – it is surprising how little time we spend on helping children to become educated and empowered consumers.

Growing interest in eco-friendly and sustainable products has led to increased awareness among modern consumers of where our clothes, food and other goods come from. Documentaries like Ethos (2011), The True Cost (2015), and campaigns like Buy Nothing Day and the Clean Clothing movement inspired by the Savar Building collapse in Rana Plaza in 2013, encourage us to think carefully about our choices as consumers. Most of the educational campaigns aimed at young consumers focus on the things they eat and drink, whereas those aimed at older consumers focus on industry and manufacture.

Perhaps this is because we assume children are more interested in what they eat than where their wellies or beds come from. But perhaps we need to think about a more holistic approach. Indeed, consumer interest in sustainability is far older than many of us realise. Though the interest in conscious consumerism may feel like a modern phenomenon, it existed in the 19th century, too. And the Victorians had some interesting solutions to the problem of telling children where our stuff comes from.

The Great Exhibition of 1851 brought together goods from all over the world in Crystal Palace, an enormous glasshouse in south London. There were fantastic things on display: a steam engine small enough to fit inside a walnut, a fabulous fake medieval court, a model that transformed from dwarf to giant at the touch of a button. There were very mundane things there, too: blocks of coal and alum, piles of wood, sheets of paper, tablecloths, and ordinary cutlery and crockery.

Considering that the modern department stores and shopping malls didn’t exist yet – Le Bon Marché opened in 1852 – this was the first time so many things could be seen in a single building, making the exhibition a bewildering experience for many visitors. A considerable portion of these visitors were children. 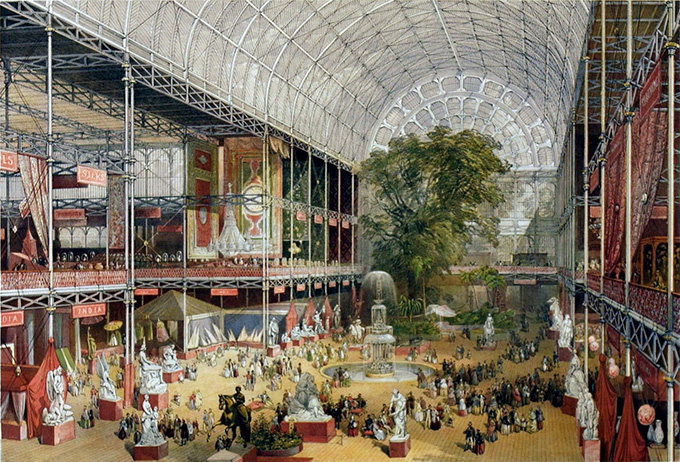 The Great Exhibition. V&A Museum
Many books were written about the Great Exhibition for children – both guide books to lead young visitors around the Crystal Palace and stories about the exhibition after the spectacle closed. These books emphasise the provenance and production of the things on display and encourage child readers to think about where these things come from, who made them, and how they were made. 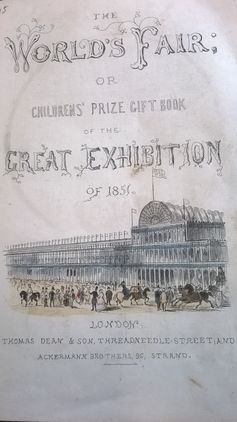 These writers wanted to engage children with the material goods around them and, by doing so, to mould them into informed consumers who understood where things came from, how they were made, and how they fit into a wider global economy. For example, the child reader of The Children’s Prize Book of the Great Exhibition, a souvenir book for young visitors, is reminded that “some of the nice butter that you eat on your rolls comes from Ireland” and that the food on the breakfast table doesn’t appear by magic.

The master of this sort of lesson for young consumers was Samuel Prout Newcombe. He appears in various census records as a photographer and a teacher, but by 1851 he was a writer and educator. His books about the Great Exhibition encourage children to investigate the objects around them and really think about where they came from.

He has some unconventional methods. In one book, Little Henry’s Holiday, the characters Henry and Laura are encouraged to touch the objects on display in the Crystal Palace and even to lick the huge block of sharp-tasting alum (aluminium potassium sulfate, which is used today in baking powder and deodorant crystals). It’s a playful, and tactile sort of learning – the kind of approach we associate more readily with Sesame Street than with the 19th century. Newcombe emphasises that the children should engage all of their senses and learn about the whole manufacturing process, from raw materials to the finished product.

A little later in the century, Annie Carey’s Threads of Knowledge (1872) focuses on helping young readers to understand the social and environmental impact of common items made from cloth.

Once she realises her children consume without thought or reflection, the Mamma of the story decides to instruct her children about the origins of the most common items of clothing, reminding them that young children are involved in the manufacture of some of the items they consume thoughtlessly. She reminds the children that though industrialisation has created employment, its history is “a history of much misery and many mistakes”, and tells them of the harmful effects of the chlorine used to bleach cotton on both people and the environment.

By positioning child characters – and by extension child readers – at the centre of a global economy, Carey’s work, like Newcombe’s, helps child readers to become informed, thoughtful consumers.

These Victorian books foreshadowed modern concerns about consumerism and sustainability. Today, our emphasis is on the informed choices that adult consumers can make. But we need to start educating consumers earlier – much earlier.

The Victorians’ playful, narrative-based approach engages the young consumer in the whole process of making, selling, buying and using household goods. We could do worse than learn from the Victorians, and their strategies for teaching young children about production and consumption at a time when consumerism and industrial manufacture were just getting started.