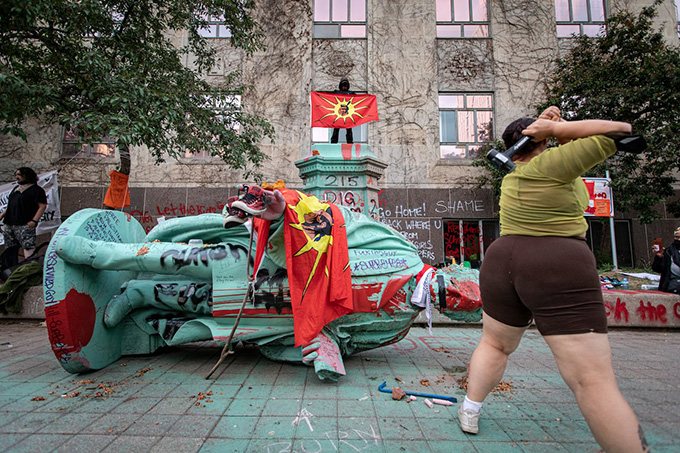 In recent weeks, the discovery of unmarked burial sites at residential schools in British Columbia and Saskatchewan has unleashed shock, anger and grief across Canada.

It’s also intensified discussions on how to address Canada’s past and ongoing settler colonialism. In the city of Toronto, there are fiercely divided opinions about whether Ryerson University should change its name given its namesake’s role in designing the residential school system.

Some have argued that the public denouncements of Egerton Ryerson are unfair because the residential school system was established after his death. They say the call for a name change is motivated by the cancel culture phenomenon and negates Ryerson’s important contributions to the development of Ontario.

Others, however, have pointed out that a name change is the only path to reconciliation because the groundwork Ryerson laid for the residential school system has made him an integral part of Canada’s colonial fabric. They argue that continuing to commemorate him in a prime location in downtown Toronto traumatizes Indigenous members of both the university and the community at large.

Undoubtedly, Ryerson University, where I teach, is undergoing a major reputational crisis. In response to such situations, conventional public relations wisdom tends to focus on image repair and minimizing reputation damage. This approach, however, doesn’t always address the public interest.

Instead, Ryerson University needs to embrace an approach that prioritizes the public interest — known as “public interest relations” — and truly listens to the constructive public conversations about racial justice and decolonization.

The university must leverage the heated debates about its name as a springboard into a process of public teaching and deliberation that complements the ongoing review of Ryerson’s legacy by the Standing Strong (Mash Koh Wee Kah Pooh Win) Task Force.

When a public relations crisis occurs, the first step recommended by most crisis communications experts is to assess its severity, scope and liability, since these factors have important implications for public perceptions and organizational responses.

The current public reckoning on the genocidal practices at residential schools presents a profound, systemic crisis impacting all aspects of the Canadian society. The sheer severity and pervasiveness of the crisis is resulting in varying public perceptions on a specific organization’s responsibility or culpability.

Denial is the least successful strategy

Established research reveals that denial is the most commonly used yet the least successful strategy when it comes to crisis communications.

In addition, because schools and universities have the responsibility to educate and disseminate knowledge, they are currently at the heart of difficult conversations about fostering consensus and making a positive social impact.

Meanwhile, simply labelling the calls for name change as “cancel culture” is problematic because it ignores the structural racial injustice such calls seek to address. Critics of cancel culture have framed the concept as a threat to free speech. Researchers of cancel culture say it can work against coherent and careful discussions and prompts fast actions that don’t delve deeply enough into racism’s root causes.

As American communications scholars Shari R. Veil and Damion Waymer highlight in their analysis of how the University of Kentucky handled a controversial historical artwork, universities need to make room for competing conversations during crises on highly charged, sociopolitical issues.

That’s why the review of Ryerson’s legacy should be considered an opportunity for candid, respectful discussions on Canada’s history of settler colonialism. Ryerson University’s brand mission, after all, is to “equip its students with the knowledge and experiences that empower them to positively and meaningfully transform themselves, their culture, the economy and society.”

Renaming an institution with a decades-long history is challenging, and suggestions for new names have their own risks. For example, Ryerson could be renamed City University of Toronto in recognition of its role as a metropolitan university serving communities in greater Toronto. This name, however, may result in criticism that Ryerson is simply erasing its colonial past.

TV Ontario personality Steve Paikin has proposed replacing “Ryerson” with “Reconciliation” so that the university can still be marketed with the “RU” abbreviation. But whether it’s appropriate for Ryerson to declare itself a champion of reconciliation is likely to trigger further debates.

Last but not least, there have been discussions that the university should receive an Indigenous name following the examples set by Algonquin, Conestoga, Mohawk and Seneca colleges. Yet this solution may lead to accusations of cultural appropriation.

One thing’s for sure: Whether Ryerson’s Standing Strong Task Force recommends a name change or not, it would mark only one small step within a long journey toward truth and reconciliation.

That means discussions on the future direction of Ryerson University must prioritize the public interest, and should be part of a larger transformation at the university. A name change on its own will not adequately meet the collective responsibility we have to engage with Canada’s history of Indigenous oppression.

For this purpose, Ryerson University needs to align its goals and activities with the concept of public interest relations that focus on creating spaces for dialogue, encouraging diverse viewpoints and promoting policy recommendations to advance reconciliation and racial justice. Only by doing so can the issues raised by the review of Egerton Ryerson’s legacy bring about meaningful change.