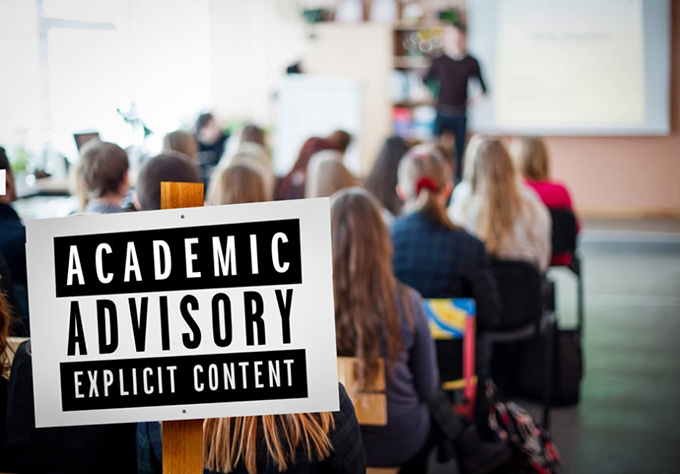 Ah the fragile college “snowflake.” These precious students are so delicate that they must be protected from shock at all times, must be provided safe spaces filled with puppies and Play-Doh. If you check alternative news, you can find endless videos of these creatures, as well as campuses eager to protect their genteel sensibilities from exposure to new ideas.

But surely the alternative media exaggerates, right? Surely these mythical creatures, if they exist at all, are only at loopy private colleges? I mean, we do have a few “real” schools left in higher education, and those schools take knowledge seriously, laughing at the mere idea that students shouldn’t be exposed to concepts they don’t like?

The lunacy here is extraordinary. While I know it’s impossible to teach a subject an infinite number of times, if it were possible, it would have been done with Shakespeare. For quite literally centuries, students have found themselves exposed to Shakespeare multiple times in their education. If it were really possible to do actual harm to a young human being by exposure to Shakespeare, we’d know this by now, right?

It’s dementedly hysterical that there are people who have evidence (however denigrated) that vaccinations can hurt young human beings, and these people are laughed at, mocked, destroyed by suggesting maybe we should do something about it, because, hey, the evidence just isn’t good enough.

But in the face of centuries of evidence Shakespeare does no harm, we’re going to do something to protect our kids from the nonexistent ravages of some old stories?

Undergraduates were advised in a “Notes on Lectures” document circulated to students that a potentially triggering lecture on Shakespeare’s “Titus Andronicus” and “The Comedy of Errors” would include “discussions of sexual violence” and “sexual assault,” The Telegraph reported Wednesday.

It isn’t simply that we’re at the stage that even our great schools must deal with the snowflakes, there’s a hidden message here. See, this is a course for students who already (supposedly) know Shakespeare, already have been exposed to these stories before.

“If a student of English Literature doesn’t know that ‘Titus Andronicus’ contains scenes of violence they shouldn’t be on the course,” David Crilly, artistic director at The Cambridge Shakespeare Festival

These students should already know these stories, the purpose of the academic course is discussion in additional depth. Allow me to highlight the hidden message:

This need for trigger warnings didn’t come from a vacuum. Students must have complained before, and these complaints not only indicate the presence of coddle-requiring snowflakes, but also that these students are stumbling into advanced courses without having learned the basic material…doubtless because they were coddled overmuch in earlier courses.

I noticed, when I was at a fraudulent community college, that the students in the calculus courses were no longer able to add fractions or perform any other basic calculations without mechanical assistance. In short, I noticed that the students were literally learning nothing in their previous classes; I chalked this up to the widespread incompetence, fraud, and corruption I saw everywhere else at the community college.

But now, with a just bit of reading between the lines, we’re seeing it at Cambridge, where students can come into their second-year Shakespeare courses clearly completely ignorant of what they should have learned in their first year courses.

But she added school officials are caving to a trend to appease “hyper-sensitive” undergrads, The Telegraph reported. For instance, the University of Glasgow issued warnings to theology students earlier this year they may see distressing images of the crucifixion of Jesus Christ.

Yes, that’s right, we’re also getting theology students, raised in a predominantly Christian culture, unaware that they may see depictions of The Crucifixion in their Christianity courses.

“Frailty, thy name is snowflake”

–from the comments section, though I wish I’d been clever enough to think of it.

While most mainstream news articles don’t allow comments (the better to prevent real people from making corrections to any false narratives the mainstream news wishes to advance), this Fox News page allows it.

Of course, the commenters point and laugh at the insanity here. People have always pointed and laughed at pointy-headed academics, but this time it’s different.

Before, the laughter would be about how the academics could take their work, in this case Shakespeare, so seriously. I even have to admit watching English professors heatedly argue over minutely different interpretations of one line of prose can be pretty amusing…even as I’ll spend an afternoon calculating a precise solution to a theoretical problem nobody else could possibly care about.

Today, the laughter is not how academics take their work seriously, but instead is how we’re taking the snowflakes so seriously. And everyone off campus is laughing about it.

As always, the source for this shift is the restructuring of where the money comes for higher education. Now that any snowflake can qualify for that money, our institutions have shifted their priorities to take care of those snowflakes, at the expense of education.