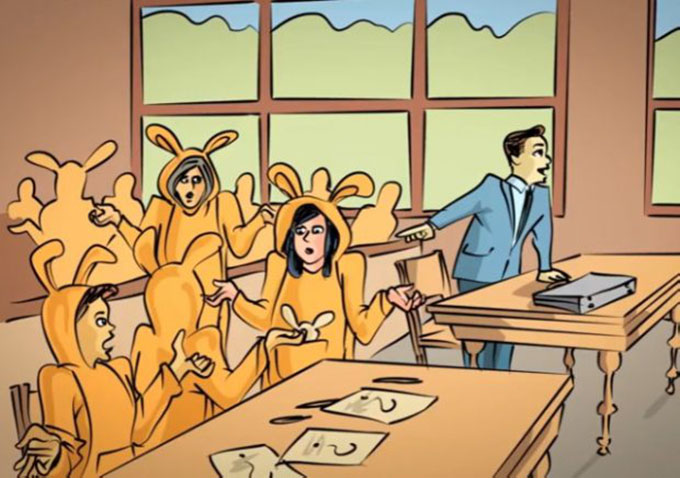 Having been part of, and victimized by, the kangaroo campus court system, I nevertheless am perpetually amazed at just how bizarrely it runs, from how piffling the “crimes” are that merit convictions, to how far reaching the penalties can be.

Of particular interest to the kangaroo court system are sex related cases. Before moving on, I suppose I should explain my own history of sexual harassment, as I was accused one time (I was cleared of the charges, however):

Me: “You look quite made up today.”

–a student walked into class late, making a  bit of a show of it. She was wearing quite a bit of makeup. Yes, I was investigated for sexual harassment based on this one comment. Admin could have destroyed me over this, but at the time I was playing ball, and so received a pass.

The latest insanity comes from the University of Kentucky. Like many institutions, the school is on a something of a witch hunt when it comes to sexual harassment:

“…university looked into 57 sexual harassment and discrimination complaints about employees from 2011 to 2016, finding enough evidence to recommend firing the employee about 40 percent of the time.”

A charge of sexual harassment is a great way for admin (who runs the entire kangaroo system) to get rid of faculty they don’t like (i.e., faculty with any integrity).

Let’s look at what a recent case:

“…professor at the University of Kentucky says he was found guilty of and punished for sexual harassment related, in part, to singing the band’s song “California Girls” at an overseas event.”

Now, I’m sure the charges were piled on here, but I want to focus on this one. The man was literally thousands of miles away from campus, singing a song in China, at a public event, a song which is played on the radio regularly.

Ok, it wasn’t an identical song, as he changed some of the words to reflect China (using Chinese locations instead of states, for example), but that’s beside the point. The kangaroo court’s ruling on this issue would be enough to nullify any other rulings the court ever made, in a sane world:

“ruled that the song ‘California Girls’ included ‘language of a sexual nature’ and was somehow offensive, though no victims were identified.”

It really is nuts working in higher education. Things you say off campus, things said every day on the radio, can be enough to get you fired, even if nobody complains about it, or even makes the slightest claim of being harmed by what you said.

Is it any wonder why most faculty just keep their heads down and, if they dare to comment at all about the madness of higher education, they do so anonymously?

Part of what makes the kangaroo system so foul is the defendants generally have no idea of the machinations being wielded against them:

Ryan said the university’s three-month investigation of his case revealed no student complaints, and that he’s never faced a complaint of a sexual nature from a student in 30 years of teaching. When he sent an email to administrators asking to know the exact complaints against him, he said, “My message was turned into an open-records request by UK’s legal office. A few days later I received a two-page letter denying my request.”

Imagine: a 30 year career besmirched, if not outright ruined, based on singing a Top 40 hit in a different country…that nobody complained about. Yes, there could be more to it, but this kangaroo system doesn’t provide for the victim knowing the exact nature of the charges.

I know our public system of justice has issues, but I assure the gentle reader it is superior in every way to the campus court system.

Having been found guilty, punishment was meted out:

“Despite not knowing the exact charges against him, Buck said he was, as punishment, banned from receiving international travel funds and stripped of a teaching award worth thousands of dollars. When he asked about due process, the provost allegedly said that because there is no constitutional right to represent Kentucky abroad or teach a particular class, the university didn’t owe him any.”

I encourage the gentle reader to consider the above paragraph: the man is convicted on charges, some flimsy, some secret, and punished based on those convictions. When asked about “due process,” admin basically laughs in his face.

Again, I saw the like a few times when I was at a skeezy community college, but I understand the gentle reader has little reason to believe a simple blogger such as myself. Thus, I feel compelled to list documented cases of sleaziness that were little different from what I’ve seen with my own eyes, many times. Across the country, this sort of thing goes on regularly. Most faculty are too disenfranchised, too impoverished, to do anything about it. In my years of higher education, I’ve been told about the site I’m getting this information from exactly one time, privately, by another faculty member.

I guess I should mention the University’s side to this:

“..Blanton said that faculty members shared “deep concerns” about Ryan’s conduct and both Jilin and Shanghai Universities also had complained about him. “Our Title IX office investigated the complaints at length and interviewed Ryan as part of the investigation, as well as the faculty who accompanied him,” he wrote. “The faculty were unanimous in their complaints and their concerns, in which a preponderance of evidence concluded that he engaged in ‘inappropriate touching’ and ‘language of a sexual nature.’”

Wonderful! It should be a simple matter to get those complaints from the other universities. None have been provided, of course.

I love the “unanimous” complaints here. I had such a charge leveled at me, only to have several of the “unanimous” committee members tell me, off the record, that they disagreed with the ruling. Trust me, the university isn’t particularly special in its confusion about what the word “unanimous” means.

Now, when I’ve covered these cases before, the administration is always perfectly confident they are in the right. The professor can try to get recourse in the system, but it’s not going to work there because admin holds all the cards in the kangaroo system. They are judge, jury, executioner, and they do it all in secret without the professor even knowing a trial regarding his future ever happened.

So, my advice to the professor is simple: waste no further time trying to get justice in the campus kangaroo court system. Take them to “real” court. It’s worked well before. Honest, that’s the way to go.

Or keep asking admin for due process and continue to have them laugh in your face.