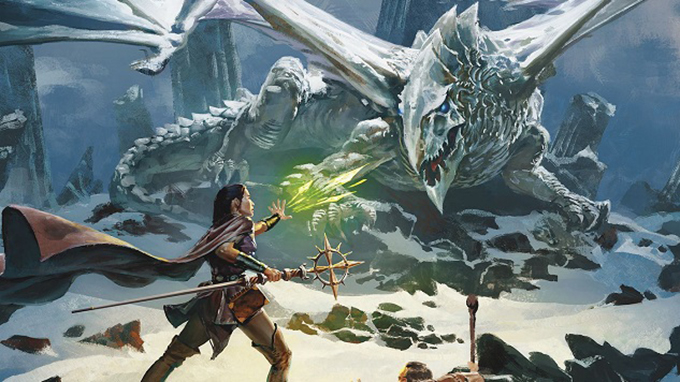 The “new thing” is often declared the problem for society’s ills. Television and comic books, when they came out half a century or more ago, were blamed for why children were so disobedient, for example. A bit more recently, Dungeons and Dragons was targeted when it achieved some level of popularity in the 70s, with a “Satanic Panic” associating the game with suicide and devil worship.

The “new thing” today is to declare something, darn near anything, as RACIST…I think the new fad is bad, of course, and a professor a while back naturally had the “clever” idea of declaring a game as racist:

But let’s get to the claim in more detail:

Garcia argues that Dungeons and Dragons encourages a distrust of the “other.”

A big part of D&D is going to unpleasant places, finding unpleasant monsters, killing them, and taking their stuff. The “other” in this case is the monster. But…this is a game. Only a lunatic would claim chess encourages a distrust of the “other” because the white pieces invariably (albeit metaphorically) attack and kill the black pieces and vice-versa.

Oh, crap, I just provided an argument that chess is RACIST now. I wonder if I’ll start getting coverage.

In any event, “distrust” is a strange and invalid word to use to describe what typically goes on in a game of D&D, as usually monsters just get hacked to death, trust isn’t relevant at all.

He bemoans the fact that Dungeons & Dragons began as a “white man’s” hobby.

As did chess. Or possibly did, not that it matters since facts aren’t generally important in these types of arguments.

He argues that wargaming communities are “male-dominated,”

As is war; many of the game rule ideas in D&D can be traced to wargames from the 60s, of course.

The article I’m quoting from mentions incidentally that Gary Gygax (one of the main creators of Dungeons and Dragons) initially played this fantasy game with his little daughter.

The “research” here is utterly ridiculous, and the conclusion that D&D perpetuates a system of white privilege is simply insane. This game is typically played by “nerds” in school (including me), among the lowest of the social hierarchy there. I promise the gentle reader, I gained no particular privileges, acquired no position of power and influence, from the playing of this game.

To claim that playing D&D perpetuates anything beyond being associated with being in the lowest social class in school is ignorance on the professor’s part.

IF he had any knowledge of D&D, and wanted to claim there were some “white male” issues with the game, he could do so with ease, however. For example, while the game has elves and dwarves and such in it, the irredeemably evil versions of these creatures are…wait for it…wait for it…BLACK! There are even various colors of dragons, and black dragons are evil! White dragons are evil as well, but like all such arguments, it’s important not to give the full story. In any event, if he knew even a little of D&D he could have mentioned such details, rather than say such broad and pointless generalizations like the above.

To go further, an early version of D&D (there are many editions, variants, and knock-off clones) gave different ability score restrictions for males and females. Females, for example, had lower maximum strength scores–something of a big deal in a game where hand-to-hand fighting was core. Nowadays we have “trans” athletes dominating “women’s” sports because we don’t dare suggest such a thing, whereas Gygax put in writing over 40 years ago that females tended to be weaker than men (he disavowed it soon afterward, saying such restrictions were a design mistake, and again it’s normal to ignore such details in such arguments). At least if the professor had said such things, he’d have a (very weak) point, but he’s so ignorant, simply playing the RACIST card knowing it’ll work regardless of validity of the play.

Garcia’s ultimate wish is to see Dungeons & Dragons move beyond its problematic past into a more diverse and inclusive future.

The above is the insidious part, and indeed, the designers of the game (and its clones) are becoming ever more “woke,” including lines like “your fantasy character can have whatever sexuality you want them to have” in the main rules and regularly engaging in all the virtue-signalling and lecturing that turned a multi-billion dollar franchise like Star Wars into a worthless smoking ruin.

That’s a shame, since destroying this game (if they can, which considering how thoroughly Star Wars has been obliterated cannot be ruled out) would remove one of the few refuges nerds in school have.