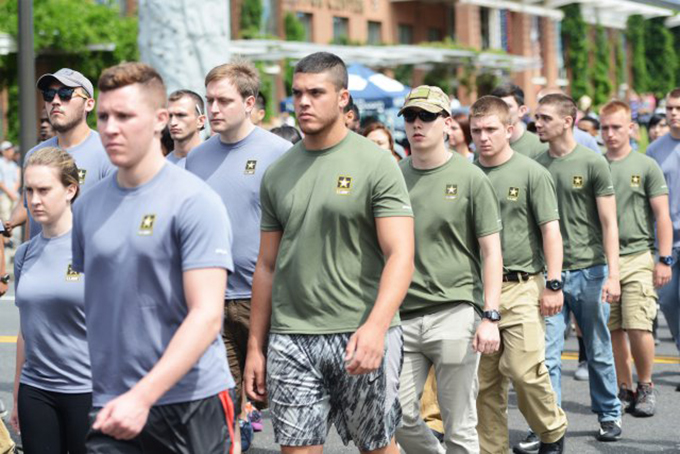 The army is certainly an option for kids coming out of high school. I know better than to say anything negative about our military in today’s culture, but I have doubts that the military is necessarily a good idea, for many reasons. I recall one time speaking to a waitress, a pretty girl, and proud that she’d been accepted into the Air Force (does any other country have a military so large that it’s broken up into so many distinct sub-militaries like ours?). When a colleague suggested to her that she might well be dropping bombs on helpless women and children, the waitress/bomber was unconcerned, smiling as she countered with:

Money soothes many ills, but I worry that our children are now so commonly raised to believe such a sum really is sufficient compensation for killing innocents, but it was the world of near 20 years ago when this conversation was had.

Now our kids “sell out” not for a decent income, but for a chance to escape crushing student debt:

With student debt an emphasis, the Army meets a more modest recruiting goal in 2019

Like everything government-related, the only answer to every question is MOAR. Despite no real threats of invasion, our Army (just the Army, no telling how much the other branches want…but I know they want MOAR) plans to increase our country’s troop count to 500,000. I won’t bother asking why we need MOAR, but let’s take a look at how they’re getting it:

…citing programs that help with student debt as one factor.

Well, this is interesting. Usually one thinks of a new recruit as a fairly young man, 18 or so. If they have programs helping with student debt then that means we’re looking at people who’ve spent a few years in college, quite possibly college graduates—that’s around 23 years old, since many graduates take more than 4 years to get those “4 year” degrees.

The Army’s goal was met despite nationwide unemployment of about 3.7 percent. The service traditionally is able to recruit more people when the economy is weaker.

The article just glances over the above tidbit, but it’s a big deal. I assure the gentle reader that the government’s economic numbers are rubbish, particularly “unemployment” which simply isn’t the same thing it was years ago. Time and again we get hints the numbers a rubbish, like in the above…but seldom does our media try to connect the dots saying something is very wrong here.

A common claim is the GI Bill, which allowed our troops returning home after World War II to get free-ish college educations, was responsible for the immense boom in the American economy post WW2. I respectfully disagree—post WW2, America was nearly the only industrialized nation that hadn’t had its economy bombed, infrastructure heavily damaged, and large numbers of its young men killed in battle (or by their own governments).

In this situation, America’s economy was guaranteed to grow dramatically, as it was alone in position to manufacture, transport, and sell goods to the entire rest of the world. I’ll grant college educations helped with that…but America would have done well post-WW2 regardless of the GI Bill.

Incidentally, lung surgery #2 has failed as well, and my tumor markers now are higher than before the surgeries. So now I just have to get very lucky that the next tumors, when they find them, will be in places more convenient than my lungs. As I look at the rows of massive buildings at MDA in Houston, all built from the profits from selling treatments which highly predominantly don’t work, I do wonder: if they had to return the money from products which don’t work as advertised (like every other business), would there be enough money left over for a tent city there?