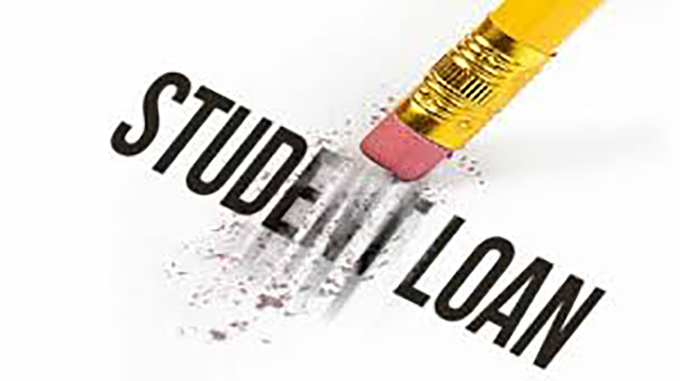 “Student Loan Forgiveness” is, among many other “free” things, being offered by Democratic Presidential candidate hopefuls. Normally, I’m against free stuff from government, but this particular piece of loot I support, as I’ve mentioned before.

Thing is, conservatives are ranting against it. A very popular conservative commentator has a long video on it; his main point is “Bernie Sanders is a fraud…”. It’s true enough, and those videos are usually worth listening to, but in this case the commentator is wrong about not doing something drastic about student loan debts.

The primary conservative argument against loan forgiveness is “you took out the loan, you pay it back.” It’s usually followed up with “I paid off my loans, why should the deadbeats get a free pass?” Conservatives tend to be older, which is part of why they’re wrong here, and are unaware of the key issue, being unaware how much higher education has changed in the years since they graduated from college:

The bulk of student loans (90%, perhaps more) were fraudulently given. This completely changes the debt obligation.

If you went to a car dealership, ordered a car, filled out the forms for the loan, but never got the car…would you honestly feel obligated to make payments? How about if the dealership reassures you the car is worth what you’re paying even though you have nothing, so you should keep making payments? Probably not, but…maybe you’d be suckered some more, hoping that car would arrive soon.

Our kids are indoctrinated from a very young age that they must go to college. They’re told as much by their parents, their teachers…every authority figure tells them this repeatedly. When they show up on campus, admin cheerfully helps them check a box asserting they are seeking a degree, and that’s the entirety of the process for getting a student loan. It’s so ridiculously simple to get these loans that over a quarter of students with loans don’t even know it–how obligated should you be to make payments on a loan you didn’t even know you made?

Our students are told that a college degree, any degree, is worth it, no matter the cost. So, they take out these huge loans, and in many cases get degrees which are utterly worthless, in many cases get no measurable education while pursuing these degrees over the course of years (around half, according to Academically Adrift). Nevertheless, they get out of school, find their degree is worthless and they make loan payments all the same.

I again maintain these loans were fraudulently given, because the “leaders” running our schools have known for a long time they were engaging in fraud:

College leaders have long excused decades of relentlessly rising prices, exploding student-loan debt, and alarmingly high dropout rates with the assumption that students are learning. The prices are reasonable and the loans repayable, they say, because of the skills and knowledge that students acquire in exchange…

Academically Adrift exposed the bankruptcy of those assertions. But it didn’t reveal anything that college leaders didn’t know, in quiet rooms behind closed doors, all along…

If the hypothetical dealership knew they were never going to provide the car, would you still feel morally obligated to keep making payments? Would the reassurances from the dealership make you keep paying, much as the assertions from the “leaders” in higher ed have been doing to our kids?

So, the simple fact that these loans were, more often than not, fraudulently given fundamentally resolves the issue of whether they should be paid back.

Part of the reason these loans were so easily granted is because you can’t escape student loans via bankruptcy. Curiously, the immunity to bankruptcy is actually causing more bankruptcies, even amongst students who are able to get jobs with their degrees.

Simply removing the bankruptcy protection would help a bit here, but we’d still be wiping out around 50,000,000 citizens on the basis of fraudulent debt.

The conservatives are also against student loan forgiveness because of an obvious question: how will we pay for it?

Who Pays for Student-Debt Forgiveness?

Taxpayers who didn’t go to college, didn’t take on debt, or paid it off already.

The above is from the Wall Street Journal but…they’re not trying very hard. Let’s see if I can scrape up some money. Current student loan debt is around $1.6 trillion.

Total college endowments are about half a trillion dollars. Now, technically, that endowment money didn’t come from the student loan scam, but seeing as colleges engaged in fraud to a large extent, causing the $1.6 trillion debt, it’s not entirely unfair to just seize the endowments.

A pro football team is generally worth around $2.5 billion, and the average NBA team is worth $2 billion. Granted college football/basketball teams aren’t worth as much, but in Division 1 alone there are 120 football teams, and 351 basketball (men’s) teams. Force the schools to sell off all their sportsball teams, and even at 20% valuation we’re looking at 300 billion, easy, quite possibly much more if you throw in stadiums and athletic facilities. Our schools should get out of the sportsball business anyway, seeing as they’re supposed to be about education and research.

Hey look, WSJ, I just found half the money in under 30 seconds.

I’ve written a few times of the real estate shenanigans of our institutions. Rice University, for example, has about $700 million in real estate holdings. Rice is a small school by university standards, only around 7,000 students, to put this in perspective. There are over 5,000 accredited schools in this country; if they on average have only a fraction compared to what Rice has, say $200 million (and, honest, many have much, much, much, more), that’s another trillion, and again probably much more.

And…we’re done with plenty to spare.

Maybe I’ve overestimated the above, and I know “fire sale” prices will be lower than expected. Let’s plan for that by raising a few extra billion.

The gentle reader should note carefully: I’m not getting this money from the taxpayer like the WSJ says, I’m getting it from the higher education system which to a large part fraudulently took the money.

The rest of the money we’ll get not by selling assets, but by eliminating expenses and forwarding that money to the Federal government. We’ll do this by targeting some of the people involved in this scam. It’ll take a little longer.

We can shut down the Diversity fiefdoms on campus, higher ed went for over a thousand years without these boondoggles. The University of Michigan’s Diversity fiefdom, for example, has an $11 million dollar payroll…shut down 30 fiefdoms like that (and nearly every state university has such a fiefdom) and forward the money to Uncle Sam for an easy $6 billion over 20 years–I know that’s a long time frame, but I want to do what I can to be sure these abominations never sprout up again–these ideological lunatics have done much harm.

I’ll need another 20 years, for the same reason, to pay off the remaining $6 billion–not too bad compared to the lifetimes of debt we’ll be sparing with debt forgiveness.

Let’s target some of the people involved here. In 2017, there were 58 college presidents making over a million dollars a year (note: some of these guys are from “nonprofit” schools…). Simply firing these guys, and taking their salaries for 20 years, would yield over $1 billion. The coach is almost always paid more than the president, and you’ll be firing the coach anyway, so there’s another billion, almost certainly more. Both coaches and Presidents each have at least 4 guys under them making at least half as much…fire them, too, for at least another 4 billion in savings, forwarded to Uncle Sam.

Isn’t it nuts that you can fire 580 people in Higher Education, save $6 billion dollars over the course of 20 years, and not affect the education of a single student on campus nor affect the research of a single scholar on campus? We have many college classes with more than 580 students in them, to keep this in perspective.

Please understand, many of our schools and universities have been plundering the student loan system for decades…they’ve squandered much of the money, but there’s still plenty there, so there’s no need to make the taxpayer foot the bill at all, despite what the Wall Street Journal says.