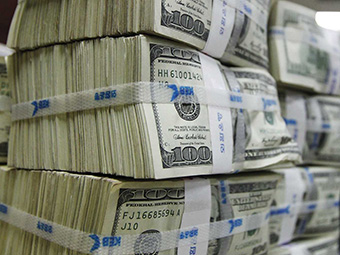 –when I was at a fake school, I overheard a student boasting what he was going to do with his Pell Grant “refund.”

When a student, or someone posing as a student, goes to college, he can easily qualify for Federally guaranteed student loan money. Over half the country can’t come up with $1,000 for an emergency, and I suspect that’s weighted towards the kids coming right out of high school.

A student qualifying for a loan need not only get enough money to pay tuition, he can get thousands more than the tuition cost. This is actually quite reasonable, as there are many expenses to college beyond tuition, above and beyond books, parking tags, and whatnot.

I can’t help but wonder that the easy loan system, combined with the steadily increasing economic stranglehold upon most Americans, has led quite a few people to make a desperate decision: go to college to get loan money, to use to pay everyday expenses.

Granted, there have always been people using that education money for non-education things, but a recent graphic I saw on ZeroHedge leads me to believe the situation is getting worse, much worse: 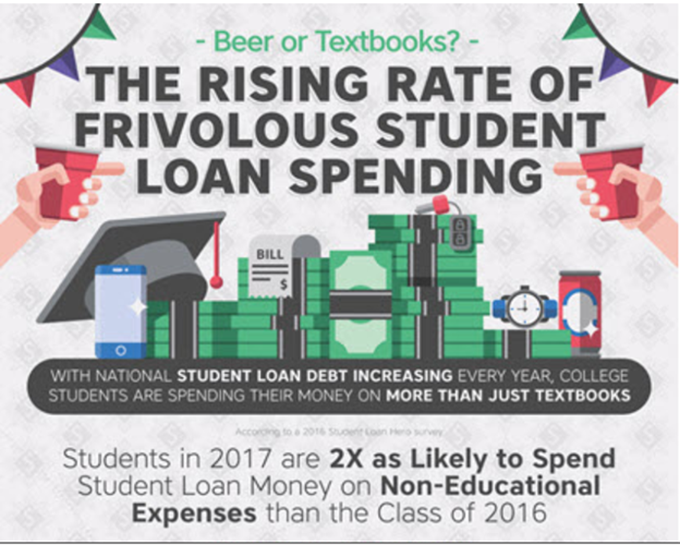 Ok, the graphic is actually from a site specializing in student loan support (warning: it’s quite possible they’re simply taking advantage of victims of student loans).

I grant the information in a picture on the internet might not be perfectly accurate (see also: “meme”), but I want to talk about those things in the graphic that ring true.

Of course students are spending that loan money on something besides tuition. The rents near college campuses are sky-high; it’s been years since I’ve been paid enough to buy a decent house anywhere near campus. Real estate prices keep going up because all that student loan money is flowing into the real estate.

Another common site near campus is a “region” packed with bars, and these bars are, in turn, packed with students on the weekends (unfortunately, they’re also packed on many weeknights). The graphic is subtitled “beer or textbooks” and I have to agree, many students are spending that money on beer. They say only about 2.5% of the student loan money is going for “drugs and alcohol” but…I don’t think so. The bathroom in my building often smells of vomit in the morning, because of students who drank entirely too much the night before (to be fair, I’m only talking about the men’s room here).

Ok, that’s what the graphic says, but a fake new site says it’s more like $30,000. Either way, this is a pretty nasty way to start life. In the 19th century, people would get trapped into being indebted to “the company,” and most of the reason for this is the company basically owned everything, up to the point of forcing people to buy at the “company store.” They quickly became indebted, with no way out because the company controlled both income and expenses.

As I see students forced to buy books from the campus bookstore, forced to pay lab/parking/recreation/technology fees, forced to rent from campus housing…I can’t help but wonder if maybe these similarities are merely a parallel with the abused workers of prior centuries. I grant that students aren’t forced to pay the skyrocketing tuition, although every campus has their tuition rise stratospherically every year.

They’re not forced, but accreditation limits the amount of coursework you can transfer to around 1 semester’s worth. With limited ability to transfer courses, students who have already spent a year of their lives on campus are stuck at that school…it’s a big reason why the schools get away with raising prices every year. And, since all schools do it, well, there’s a viscous cycle here.

Even as I concede some bias in the graphic, financial ignorance is indeed a big problem here. Our students are being indoctrinated in fake economics, indoctrinated into whole fields of fake knowledge, and this indoctrination is justified in the “General Studies” clause of accreditation. Why can’t some of the general studies involve personal finance? Obviously, telling students “don’t go into debt for a degree that won’t pay for the debt,” a basic consequence of sound personal finance, would cut into growth, so I guess that answers my question.

Wow, a starting salary of $50k? I have nearly 30 years of experience in higher ed and my salary isn’t $50k. I’d love to know where these numbers are coming from, as I suspect not many of my readers got this kind of money right out of college, and seeing as median income for the US is about this much, half my readers probably aren’t making what this graphic says is a starting salary.

While I dispute some of the numbers in this graphic, it does end with some sound financial advice, advice that our students will not get when they step on campus. I encourage anyone sending kids to school to at least look it over.

Student debt is rising at an ever increasing rate…I can’t help but wonder just how much of our economy is based around sucking up money that supposedly is for education.

Our Poo Bahs, with their extraordinary salaries and insane perks, are certainly keeping our high end real estate and expensive restaurant industries doing well, but it’s clear the lower end establishments are also making great profits from the student loan scam, one beer at a time.

How much of our growing economy is just pure debt? It’s hard to say, but another graphic points out what will happen by 2030 if student debt continues to grow at the same rate it’s using now:

Again, I dispute the numbers here. Yes, if it keeps growing, it’ll be over 16 trillion dollars in a bit over a decade from now. But, in the immortal word of ancient Greece:

Every day I see another gigantic sign that higher education, in its current form, is on its last legs. Whether it be riots to keep speakers from talking, or yet another “Hate the White Male” course offered on campus, or another planeload of golden parachutes being issued to administration, I see one more thing that I know can’t go on forever.

Bottom line, things that can’t go on, stop. In this case, I suspect it’ll likely stop before 2030, so I don’t trust the number the graphic gives.