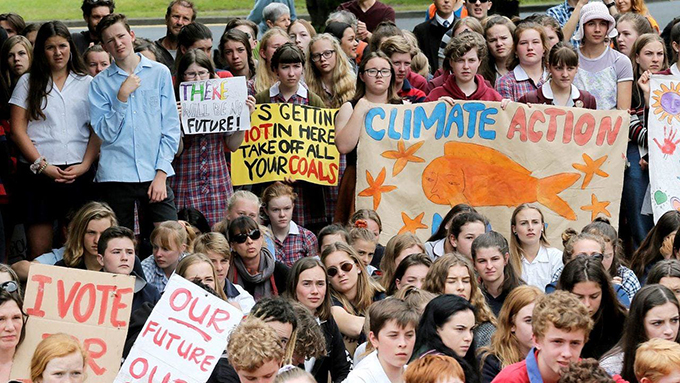 On March 15 2019 thousands of students across Australia will skip school and join the global strike for climate action. This is the second time students have taken to the streets to demand more government action on climate change. Last time they did so, in November 2018, the federal resources minister, Matt Canavan, told them:

The best thing you’ll learn about going to a protest is how to join the dole queue. Because that’s what your future life will look like, up in a line asking for a handout, not actually taking charge for your life and getting a real job.

Politicians are up in arms about tomorrow’s protest too. New South Wales is just over a week away from a state election where climate change is a key issue. NSW Premier Gladys Berejiklian has slammed as “appalling” comments made by Opposition Leader Michael Daley in support of the strike.

Such attitudes do worse than just dismissing the students’ voices and their message of urgency. They fly in the face of international research and the aims of Australia’s own curriculum.

By seeking to understand a global issue such as climate change, taking action and clearly articulating their perspective, the students are demonstrating the skills, values and attitudes the curriculum states should constitute the aim of education. These are also the attributes employers look for.

The Australian curriculum is based on the Melbourne Declaration on Goals for Young Australians, signed in 2008 by all state and territory ministers. Its second goal is to graduate students who are “successful learners, confident and creative individuals, and active and informed citizens”.

To help achieve this, the Australian curriculum includes a civics and citizenship strand in its humanities and social science subject. This encourages an inquiry-based approach, presenting students with multiple perspectives and empowering them to reach their own conclusions.

A 2014 review of the Australian curriculum concluded with overwhelming support to not only keep but further develop general capabilities that reflect 21st-century skills.

Canavan’s dole-queue comments also contradict research that identifies these general capabilities, sometimes described as “soft skills”, as the desired graduate attributes sought by employers in Australia and across the world. These skills are also acknowledged as equipping students for contemporary, transitory career patterns that require high levels of communication, mobility and critical and ethical thinking.

When the students marched in 2018, Prime Minister Scott Morrison said they should be doing “more learning in schools and less activism”. But international research clearly shows that, by preparing for and participating in this strike, students are learning the skills of active citizenship, which they will carry into their adult life.

Australian students joining the movement, started by 16-year-old Swedish student Greta Thunberg, also reflects research showing young people have no faith in politicians and the political system. This is why they are taking direct, grassroots approaches to political, social and environmental issues.

The students’ website, rallying the support of their peers, explains their reasoning for walking out of their classrooms:

In Australia, education is viewed as immensely important, and a key way to make a difference in the world. But simply going to school isn’t doing anything about climate change. And it doesn’t seem that our politicians are doing anything.

By making this choice, students are demonstrating their worldview and understanding of contemporary global issues, their ability to think critically and examine problems, to manage complexity, to communicate and work effectively with others, as well as values and attitudes that focus on the common good beyond their own self-interest. And they are taking action.

In other words, they are displaying all the elements of global competence, as identified by UNESCO and the OECD. In doing so they are fulfilling the Melbourne Declaration’s goal and acting as “active and informed citizens” of both their local and global communities.

Author Bio: Karena Menzie-Ballantyne is a Lecturer in Education at CQUniversity Australia