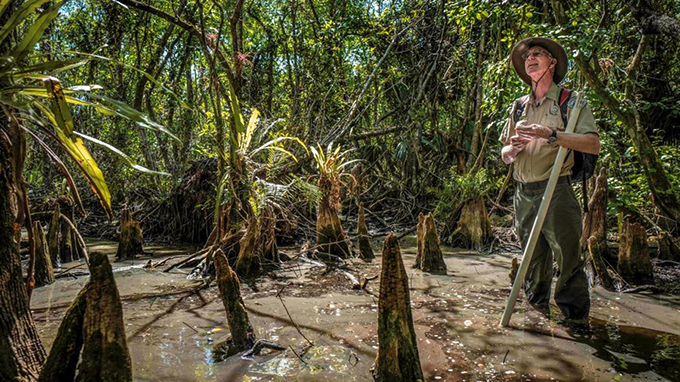 Before cities there were swamps. Wetlands and swamps globally have been sacrificed to pave the way for housing, agriculture and industry. Urban developers and dwellers have largely overlooked the vital role that swamps play in buffering storms, capturing carbon, fostering life and filtering water.

One of the biggest threats to swamps today is a lack of understanding of swamps’ role in human survival. This is especially true in South Florida, home to the Everglades, one of the largest swamps in North America, and the site of a huge and expensive wetland restoration project.

In a time of climate emergency, it is especially important to listen and learn from the swamps around us. But what if you don’t live near a swamp?

I spent a semester as the visiting Knight Chair at the Center for Communication, Culture and Change at the University of Miami, teaching a production course in interactive documentary and the Everglades. As a filmmaker and teacher who is invested in participatory processes, my goal was to explore media methods to promote what I’ve come to think of as swamp literacy.

Over several months, I worked in collaboration with university students, community organizations, biologists and co-directors Kim Grinfeder and Juan Carlos Zaldivar. We developed SwampScapes, a multi-platform documentary that involved a 13-minute Virtual Reality (VR) film, a Swamp Symphony, and a study guide. For those who could not access the VR film, we shot video portraits that can be viewed online.

We were curious to explore how we could use VR to cultivate care about a site that is inaccessible to most people. Our idea was to create a virtual field trip for youth with no means or interest in wading through a swamp.

Part of the appeal of the virtual field trip was to mitigate the impact of visitors on the ecosystems we were trying to protect. We wanted to democratize VR by creating stories informed by environmental justice and participatory methods.

A central challenge guiding the project was how we might make the process as meaningful as the final product.

We were inspired by activist David Bollier’s articulation of “commoning”as a method where people foster social connections with each other and with nature to challenge the competitive logic of the market economy and its focus on resource extraction. His analysis draws on ideas about protecting and interacting with resources that people depend on and share in common. 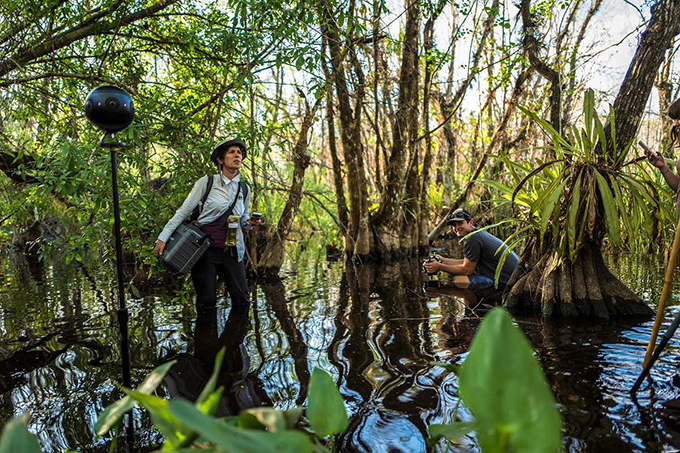 To start our own process of media commoning, I asked students to identify a personal goal, skills they might contribute and their hopes for impact.

This simple exercise helped to establish that the project would be shaped by our shared input, the people we met in the field and the research we developed as a group.

Kyle Powys Whyte and Matt Ferkany, professors of philosophy and education at Michigan State University, advocate for the need to integrate participatory virtues such as fairness, empathy, humility or compromise into environmental education. I wanted my students to gain experience in collaborative problem solving and negotiating differences. 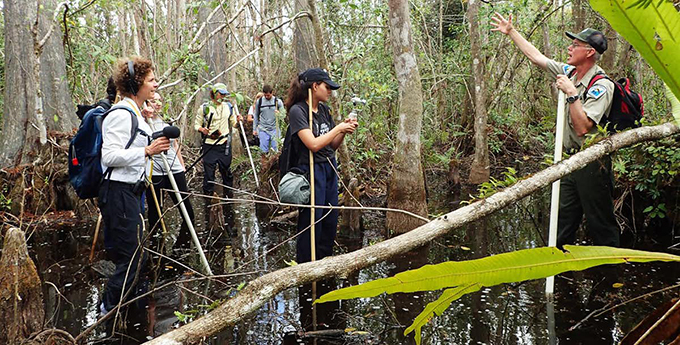 Environmental justice speaks to the power imbalances in environmental struggles. It’s a framework that encourages people to think through critical questions like: “Whose perspectives are included in a media project?”

Anishinaabe scholar Deborah McGregor suggests that in addition to considering power imbalances between people, we must also rethink our relationships to other beings. In a VR film, place itself becomes a lead protagonist, so our challenge was to limit human narration and to let users experience the place’s presence.

In SwampScapes, local fisherman Larry Pace describes how he respectfully shares his fishing hole with a resident alligator, explaining, ‘this is his territory.’ (Rita Bauer), Author provided

We wanted to ensure that if we were hosting a virtual field trip or teleporting visitors to a fragile, sacred or faraway place, that we were careful about how a user entered the space.

We relied on the concept of guides, people with deep relationships to the place, to situate the user in a respectful way. Seven guides worked with us including algae specialist Larry Brand, raptor biologist Donna Molfetto, and Miccosukee educator and water activist Betty Osceola. 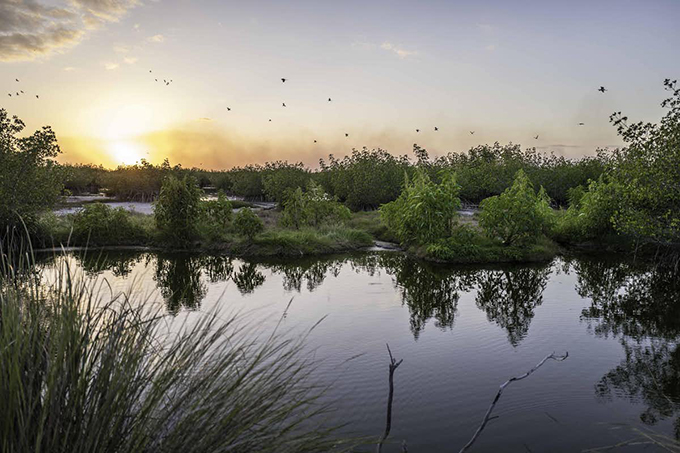 From audience to community

Throughout the process, we tried to be self-reflexive about the intended and unintended impacts our project might have. By developing a virtual field trip to cultivate swamp awareness were we inadvertently encouraging students to be more interested in screens rather than getting outside to explore local landscapes?

Virtual field trips aren’t a replacement for outdoor education and technology alone does not help to cultivate care. While VR documentary projects have potential for education they can also be associated with new forms of consumerism, spectacle or electronic waste. Acknowledging entanglements is a necessary part of critical media literacy.

Our SwampScapes project is taking a new direction as we begin outreach.

We have shared our project with 85 Grade 8 students in Miami as part of their biology curriculum and we hope to reach more students. 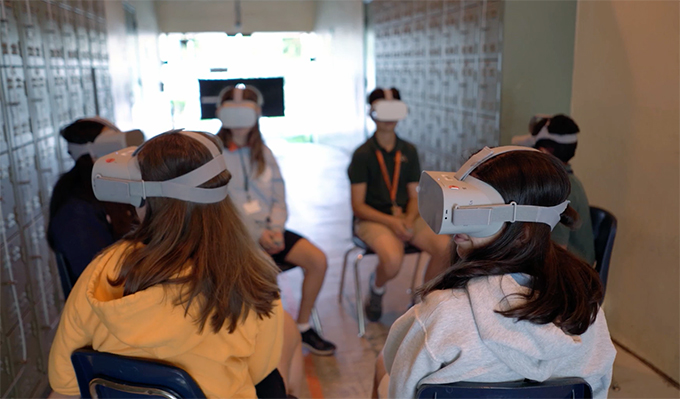 This summer we attended the Climate Story Lab, a workshop where producers of environmental media and climate change experts explored how to transform audiences into communities to foster climate awareness.

We not only want to cultivate care about swamps — we also want to build our capacity for collaborative education.