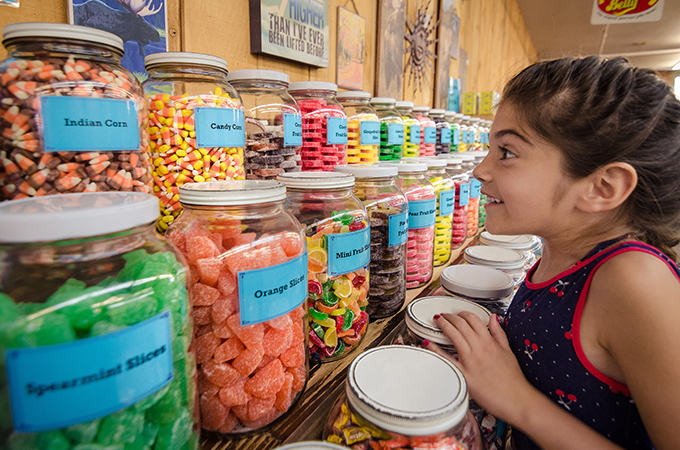 One might think that candy is not found in secondary schools, that it is “childish” foods, eaten on birthdays or other celebrations. However, these sweets, which, according to many parents must remain on the order of the occasional, are invited daily to college.

Although they are very often prohibited in the internal regulations of schools, students consume them in the playground, but also in class, with more or less discretion depending on the teacher – and the student.

In college, candy doesn’t just have a hedonic taste function, it also has a social function. This is what reveals the ethnographic survey that I conducted, by participant observation in class, in the canteen and in the playground, for two successive years (2010-2011) in two fifth grade classes. I have observed that sweets, as foods associated with pleasure and reward, play a role in group integration. Indeed, finding one’s place among one’s peers is one of the main challenges for college students, if not the first.

The multiple functions of sweets

My investigation shows that candy helps to build friendships, for example in the playground: you only give it to those you consider to be part of your circle of friends. This “friendly” sharing can also take place in the classroom, although in this case consuming candy often has another meaning: it is a transgressive act aimed at defying teachers and more generally. school order.

Eating candy in the classroom discreetly is again different from doing it ostentatiously in front of the teacher. For example, a student who chews gum, who the teacher asks to throw it in the trash, and who pretends – quite dramatically – to throw it away and goes back to his place with it, clearly has objective of showing that he knows how to stand up to the teacher and openly rebel against the school. The pupils who adopt this type of practice are young people who seek to gain “popularity”, to be among those who are not afraid of teachers.

The popularity rating of a student depends on his degree of integration among his peers: the more friends a young person has, in his class, but also outside his class, the more he eats lunch with a large number of guests. . The more he can speak loudly, break the rules, stand up to teachers, the more this student is considered “popular”. The students are divided into different groups: groups of student leaders, in which we very often find class delegates, more marginalized groups, forming small circles of friends, and finally “free electron” students, excluded. of the class-group, and very often stigmatized by the most popular pupils.

In addition to this transgressive function, sweets can be at the heart of issues of domination between students: some, more popular, may ask others, more on the margins, to bring sweets to college that they will give to their “ kidnapper ”. Other students, also on the margins, voluntarily buy packets of candy which they are dispossessed in the corridors of the college by popular students. This practice is similar to what we could call racketeering and testifies to a fairly pronounced climate of violence in college.

Indeed, in college, relations between students are strongly marked by issues of domination over each other, which creates an atmosphere that is sometimes quite violent and the exclusion of certain students, the most marginalized. For example, in the canteen, some find it difficult to find a place at the table with their comrades and are the scapegoats for their comrades.

Sweets are at the heart of reports of harassment , physical (rummaging in the pockets of one’s “victim” or pinning her against a wall) or moral (claiming a fictitious friendship to obtain the coveted object). This violence in relations between students seems less significant in primary school  : it is possible to be alone without being stigmatized.

A food that is both regressive and transgressive

The sweets consumed in college allow above all a demarcation of the adult world, especially teachers when they are consumed in class. They make it possible to claim the status of a child, removed from the concerns of adults and turned towards the pleasure of sweets.

The consumption of sweets is indeed a transgression in relation to parents, teachers but also to the public authorities which fight against overweight or oral health problems (both dental caries and overweight and obesity are issues of concern. youth public health ). This is undoubtedly a premise of the teenage revolt. Moreover, some adolescents eat much less candy than others, and certainly not during class: there are very different degrees of revolt compared to adults.

To eat sweets is to ignore all the food education campaigns that recommend “not to eat too much fat, too sweet, too salty”, it is not to accept to become an individual responsible for your health. is to say, “I am still a carefree child and turned towards his pleasure”.

Sweets allow some teens to build themselves as leaders, who challenge teachers. Conversely, students who are dispossessed of their candy appear as submissive young people, on the margins, and will undoubtedly have more difficulty in building a positive identity of themselves.

Buying candy alone, out of the eyes of parents, constitutes a freedom from parental constraints, who often disapprove of the consumption of candy and who are sometimes far from suspecting that their children consume candy on a daily basis in college. It is a first transgressive purchase, which allows young people to stand out from parental authority, but it is also a regressive purchase, since it involves buying a food related to childhood.

Buying cigarettes is probably something quite different since this object is linked to the adult world. It also represents a transgression with respect to parental authority but not a regression, quite the contrary. I have not observed any fifth graders smoking, but it is possible that some students have already tested cigarettes.

So, candy can be a way for middle school students to build friendships, choosing who to share their candy with. They can be an object of transgression, the consumption of sweets in progress by some students allowing them to rebel against the established order and thus gain prestige among their peers. Or, candy can be stolen by popular students from more marginalized students, too timid to resist the pressure of these students. Sweets therefore make it possible to strengthen social ties and establish the domination of certain students over others.