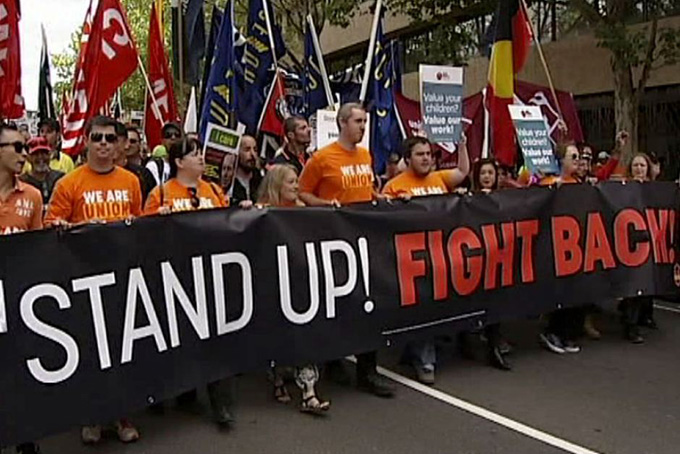 It’s been a bad year.

Not just for higher education. And not just at it winds down.

The coming 2018 does not bode well for American colleges and universities. For one thing, the Janus case against agency fees (when unions can assess non-members for fees as a result of gains and benefits the unions have won for them) heading to the Supreme Court may prove to be the final straw that breaks the back of unions in this country, including those protecting faculty rights such as academic freedom. We all need to be ready for this contingency, ready to help our unions survive this new attack, propping them up, supporting them more than ever before, because new straws will come even if our unions–and (and including) the AAUP–survive this.

According to Sarah Jones, writing for the New Republic, the Koch brothers have “been trying to get a case like Janus before the Supreme Court for years, and if the court rules in their favor—with Neil Gorsuch on the Court this is a likely possibility—it’ll strike a blow to unionization and effectively transform portions of the public sector into right-to-work territory.” And it will only get worse. As Risa Lieberwitz writes for Academe:

No matter what the outcome is…, we can expect more attacks on unions in the courts and legislatures. Twenty-eight states have enacted so-called right-to-work laws that prohibit agency fees. As we continue to fight against these attacks, it is important to remember that in the face of adversity, employees can and do organize. We must remain focused on the power of organizing to build union membership and expand the labor movement to work for social justice and fairness for all employees.

As if that weren’t enough to scare those of us who care about the quality and integrity of higher education, there is also the concerted attack on academics through social media, especially when faculty attempt to assert their own rights to free expression (not to be confused with academic freedom). This is no small thing. As Hank Reichman writes on this blog:

The entire academic profession must condemn the burgeoning epidemic of targeted harassment of faculty — and of students.  Professor [George] Cicciarello-Maher [who recently resigned as a tenured associate professor at Drexel University as a result of his own activity on social media and the responses it engendered] bravely stood up to this onslaught for as long as he could.  It is now up to the rest of us to pick up that banner.  Whether or not your political views are consistent with those enunciated by Professor Cicciarello-Maher, it is the duty of all of us to heed his advice to “defend our universities, our students, and ourselves.”

Janus and the social-media attacks are, of course, related. They stem from an on-going attack on colleges and universities whose roots go back at least to the 1960s (though, I would argue, those roots dig deep and back into the attitudes Richard Hofstadter outlines in Anti-Intellectualism in American Life). Their most prominent sponsor, over the past few decades, has been David Horowitz, someone who likes to write about higher education for people with little exposure to it and from a vantage point of no real experience of it (he was last a student in the early 1960s and has never really been a teacher).

One of Horowitz’s acolytes, Jack Kerwick (who actually is an academic with a PhD and who, at least, teaches), recently posted on Horowtiz’s FrontPageMag, “Is Academic Rigor Racist?” Toward the end, he writes this:

The Racism-Industrial-Complex (RIC) is a sprawling industry with tentacles reaching into practically every area of our culture.  There is no place that it has impacted to quite the degree that it has impacted academia.  In fact, the emergence and growth of RIC has corresponded to and fueled the emergence and growth of the Academic-Industrial-Complex.  The two intersect and blend with one another.

He is responding to attempts to fight racism through academia, something the right, which relies on racism (the new ‘opiate of the masses’) to gain and maintain power, does not want to see. This particular instance is an academic article by Purdue University’s Donna Riley, who wants fellow academics to understand that “rigor” can have the result of narrowing academic pursuits with its generally unspoken adherence to the ways of the power structure. In the abstract with her article, she writes, “Understanding how rigor reproduces inequality, we cannot reinvent it but rather must relinquish it, looking to alternative conceptualizations for evaluating knowledge, welcoming diverse ways of knowing, doing, and being, and moving from compliance to engagement, from rigor to vigor.” As citizens of a racist patriarchy, this is something we need to consider; as academics, “rigor” is something we need to constantly re-examine.

Kerwick goes on to argue that Riley is simply trying to replace one power structure with another, that her “argument is powered by the leftist’s singular obsession with realizing his or her vision of Equality.” This is odd, because Kerwick shows the same obsession, if that’s what either is.

Snark aside, what Kerwick is trying to do has nothing to do with Riley and everything to do with creating a popular image of American higher education as out of step with the general (read, “white”) population. His post starts, “If you’re a parent who is giving consideration to refinancing your home for the sake of sending your child off to a university, you may want to reconsider” and ends with “Parents with college-bound children, particularly (but certainly not only) white parents, should bear this in mind.”

Kerwick’s is a typical tactic of the right against higher education. The goal is to create a divide between what goes on on campus and what goes on in “regular” American lives and the tactic is to balloon a single person, purpose or effort within academia into a representation of the whole. This is extremely difficult to counter, for colleges and universities, for the most part, really do foster diversity of individuals, ends and means. Yes, academics do tend to be liberal, but that has no more significance to what goes on there than does the fact that most in corporate America tend to be conservative has on the ways of doing business.

When Catherine Rampell, writing for the Washington Post, asks “Why do so many Republicans hate college?” the answer should be obvious: Because they have been taken in by decades of drumbeat propaganda of the sort of Kerwick’s post. Rampall understands this. Speaking of Arizona, she writes, “Republican politicians clearly view beating up on colleges as a way to prove their conservative bona fides.” This has worked for a generation and there is no sign it is lessening. So pervasive has the anti-academia feeling become that even a liberal like New York’s governor Andrew Cuomo can beat up upon the City University of New York without repercussion.

The aim of the right, concerning public higher education, is to create a milieu in which continuing reduction of funding is acceptable to the large conservative block of American votes so that private, conservative funders can be stepping in and, as Rampall says, “replacing dwindling public dollars with private ones, especially those that will appease suspicious conservatives.” They want to make American higher education responsive to their own political philosophy solely, doing so by claiming that it is now responsive only to another political philosophy, the dreaded “Marxism.” That this is untrue, as anyone who spends real time on campus knows, is irrelevant.

Over the coming year, we who are fighting to preserve American higher education (the greatest system of higher education the world has ever seen) are going to have to start finding ways of effectively countering people like Kerwick, Horowitz and the battalions of politicians who make up the Koch army. One thing we are going to have to do is show that we can disagree without trying to demolish our opposition. That’s going to mean that we stop allowing careers to be destroyed because of political forces, be they George Cicciarello-Maher or someone on the right whose ideas are out of step with those of fellow academics. The AAUP is always willing to support faculty when they are wronged in ways relevant to their academic pursuits no matter which side of any political divide a particular scholar may fall upon. The rest of us need to follow suit.

We need to start being extremely careful when we react to what other academics say, even when they are attacking even another academic whose opinions are similar to our own. Otherwise, we get caught up in messes like the McAdams/Abbateone at Marquette University. Marquette suspended John McAdams because of his criticism of a teaching assistant, Cheryl Abbate. This is one that conservative columnist George Will is now using to further the right-wing attack on academia.

Will describes Abbate as having “a precocious aptitude for academic nastiness” and describes her as an “aspiring philosopher” whose “argumentation skills can be inferred from her reliance on epithets” and as someone who “claimed for herself the coveted status of victim.” When she left Marquette, according to Will, she left wreckage in her wake, so much so that prospective “Marquette students, and Marquette alumni, must decide whether this school, awash with the current academic hysteria and corruption, merits their confidence and support,” using this situation, just as Kerwick did with Riley, to further increase the divide between the conservative bloc of American votes and American higher education.

Instead of wishing situations like these away or of helping remove from campus whichever side we see as the bad guy, we need to start embracing, in the public sphere, the difficulty such incidents raise, discussing them calmly even when others are shouting in our faces. However, we should be careful to know just who we should be addressing. We are not going to convince Will any more than we would Horowitz and Kerwick—the gain they now gather is greater than either logic or academia could offer them. It is not in their interest to even listen to the other side. They are not who we should be talking with.

No, what we need to be doing is engaging those who can gain through higher education, showing just what that is and how it is achieved. The right never has been addressing us, but we have made the mistake of responding to the right rather than to their real audience, the white American voting bloc now so heavily invested in Donald Trump. As a result, we have lost the fight.

This year, we need to start speaking farther abroad than normally we do, engaging with people way beyond academia’s walls—not to the politicians and pundits, but to the very people that many of us, after the events of the past 13 months, are loath to speak to at all. And we need to listen to them patiently, hearing out even nonsense conspiracy theories. Then we need to show them something different from what they imagine, inviting them onto our campuses and even into the meetings of our organizations (why can’t we find a way to allow members of the general public to attend our sessions for free—and why can’t we invite them?).

If we are to turn things around, we are going to have to do it through new types of weapons. We need to hear what Will, Kerwick and Horowitz are saying and see who their real audience is and why it is responding so positively. We can’t fight them directly (that won’t help) but we can find ways of countering their influence. As Riley says in a quote far above, we need to welcome “diverse ways of knowing, doing, and being”—even if that means listening to our opponents and learning from what they are doing.

Otherwise, next year will be a bad year, too. Or worse.