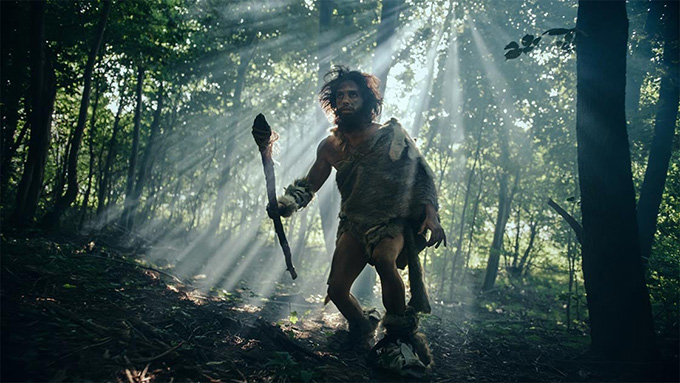 Teaching, in its broadest meaning, is a uniquely human phenomenon and linked to our nature as cultural beings. Natural selection shaped our cognitive structure so that we could take advantage of the knowledge possessed by our fellow humans.

Humans are capable of generating a cumulative cultural inheritance system thanks to which we have managed to spread across the planet despite not having special adaptations to survive in different environments.

The adaptive advantage provided by the accumulation of knowledge favored the development of brains better equipped for cultural learning, equipped with highly efficient imitative abilities, well above those found in chimpanzees and bonobos, and elementary forms of teaching based on parental guidance in their young’s learning, which is lacking in non-human primates.

The ability to teach arose early in our lineage, probably a million and a half years ago, when our ancestors were able to make the handaxe tools characteristic of Acheulean stone technology . These tools seem very difficult to manufacture by simple imitation, in the absence of elementary forms of teaching.

Why do we teach?

From its origins, teaching served to transmit information about how to behave , that is, about what behaviors are good and what we should avoid, and how to carry them out effectively.

It is a question, first, of ensuring that young people do not imitate behaviors that are inappropriate for their age and that they do not explore other dangerous ones in themselves, and, second, that they are capable of accurately reproducing the behaviors that are considered appropriate. The latter is something essential for the accumulation of instrumental knowledge, such as, for example, the processing of food or the use of a computer.

Teaching also facilitates the maintenance of behaviors that do not produce an immediate reward in such a way that they are difficult to consider as useful and tend to be abandoned.

To achieve this, its most elementary form is enough, characteristic of mother-child communication, which is based on the orientation of learning through the approval or disapproval of the child’s behavior, something that can be done with a gesture, without words.

Parents express the emotions of liking or disliking that their children’s behavior arouses in them, which leads them to emit acceptance or rejection signals that are processed by the children as prescriptive signals, that is, as imperatives .

In addition, children perceive these signals as an indication of the value of the behavior, so they learn to evaluate it as good or bad, appropriate or inappropriate. They do this even though, in the absence of social interaction, the behavior does not provide any form of reinforcement. In this way, thanks to teaching, we learn as true what they teach us and a vision of the world is shared with the people around us.

Teaching is essential for the accumulation of instrumental knowledge. Science and technological development advance on the shoulders of giants. Teaching makes it possible to accurately replicate accumulated knowledge.

The accumulation of knowledge can clash head-on with constructivism, the dominant model in schools today . According to this paradigm, knowledge is forged in the human mind as a constructive process, based more on the initiative of the learner than on the guidance of the teacher.

Seen from the complexity of accumulated knowledge, any constructivist learning situation in the classroom is still anecdotal, although it can sometimes be useful.

Education plays a decisive role for integration into society. Teaching contributes to the transmission of those non-instrumental knowledge that make up the cultural idiosyncrasy of any human society. Every society needs education to establish itself as a cultural community.

Approval and disapproval are key in teaching all kinds of behaviors, especially those that, in the absence of social interaction, do not produce reinforcements. Precisely the effectiveness of teaching depends to a large extent on the emotions that are put into play . Although it is obvious, rewards and punishments are necessary for learning, even if they cause discomfort in some individuals.

The importance of consensus

Teaching needs consensus to function effectively. There is no educational model that supports the lack of agreement between the actors involved: administrations, teachers, families, business employers, unions, society in general, etc.

Currently there is no shared consensus that articulates cultural transmission like the one that characterized the small-scale societies in which teaching evolved. Probably, agreeing on what is wanted is a much more decisive factor for educational success than the pedagogical model that is practiced.

Teaching works because our evolved cognitive architecture leads us to consider as true, good or beautiful what is transmitted as such by the people important to us .

With the exception of the logical, mathematical and scientific fields, an important part of the beliefs that we learn could be others, and yet we perceive them as if they were objective truths. We function as believers, clinging to the truth of our knowledge, values ​​and practices and, therefore, reluctant to accept the arguments of those who think differently.

This way of working on our cognition is the toll we pay for not starting from scratch and taking advantage of the knowledge of others.

Without tribalism, but with explicit convictions

This is the essential lesson that must be learned if we are to overcome the tribalism with which teaching has operated since the Pleistocene: the need to question and emotionally distance ourselves from the objectivity with which we perceive our beliefs.

That does not mean giving up improving the world in accordance with our convictions, but it does mean respecting people educated in different traditions.

We know that any ideological proposal always involves principles that function as axioms and that depend, to a large extent, on our learned preferences. Therefore, any debate with an ideological content, including the educational one, must make these starting principles explicit and seek a consensus on them.

Author Bios: Laureano Castro is a Biology Tutor Professor at the UNED – National University of Distance Education and Miguel Angel Toro Ibanez is a Professor Animal Breeding at the Polytechnic University of Madrid (UPM)

This article has been written in collaboration with Miguel Ángel Castro, PhD in Social Anthropology and Secondary School Teacher.