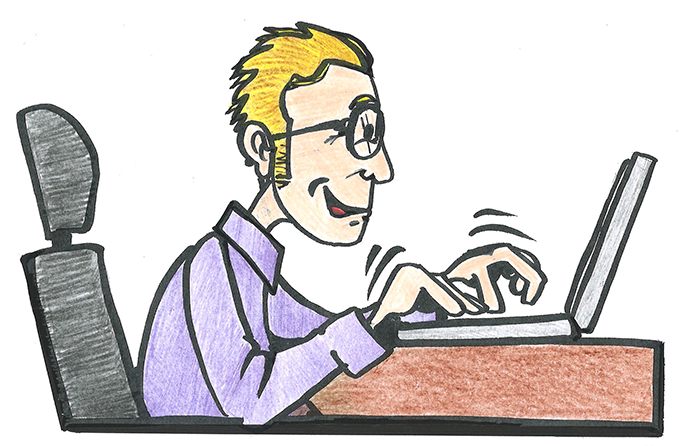 I’ve often compared the last part of your PhD to putting your head in a bucket.

In the Researcher developer trade we call this last bit of the PhD ‘The Write Up’. ‘Writing up’ involves hours and hours of detailed work; to end up with a manuscript ready for examiners. There’s a sameness to Writing Up which is crazy making. You’re in that damn document, day after day, adding words, editing words out, fixing mistakes and chasing up stuff your Past Self left unfinished. Meanwhile, Family and social life starts to suffer and your world gets very narrow.

The suffocating feeling of a looming deadline, coupled with feelings of isolation, IS like walking around with a plastic bucket over your head.

If this period of bucket-time is relatively short, say six months or so, it’s bearable, but for many people this bucket period stretches into years. Only about 20% of people hand in ‘on time’: most have to ask for at least one extension. Many get multiple extensions. Taking five years to do a PhD is not unusual at all.

People run out of time for all kinds of reasons: poor supervision, difficulties with writing, an out of control project scope or failed experiments. In the end the reason doesn’t matter and assigning shame and blame is pointless. What matters is dealing with the problems that arise as a result.

One of the problems I’m concerned about is what I call the Feedback Loop of Shit.

As the scholarship money runs out, or the effects of living on a low income for years start to bite, people have to drop to part time study and take on more paid work. At the same time, people find they can’t keep putting off ‘life’ things, like having a baby. Some develop chronic health problems, which are made worse with the stress of an unfinished thesis lurking in the background. A complex Feedback Loop of Shit starts forming, which makes finishing even more important, at the same time as making it seem more out of reach than ever.

At ANU, my team tries to stop this Feedback Loop of Shit, so people can finally take the bucket off their head and get on with their life.

We start by supporting people to write. Ideally, people don’t ‘write up’ their research, they ‘write along the way’ and avoid the problem of producing tons of words near the end. To complete a thesis you need to master the art of continuous, productive and useful writing. But that’s easier said than done. Lots of people write every day during their PhD – and end up with a Hot Mess of Too Many Words that feels more like a swamp monster than a manuscript.

Obviously helping people to learn to write productively is a good place to start fighting the Feedback Loop of Shit. A key part of our strategy at ANU has been Thesis Bootcamp, which we adapted from a concept developed by colleagues at Melbourne Uni). Thesis Bootcamp is a three day intensive writing retreat where we set people a stretch target: to write 20,000 words. Our version of Thesis Bootcamp includes lots of instruction on how to beat procrastination and write faster. Each time we run it, about four people will hit this 20,000 word target; everyone writes at least 5000 words and many do more than 10,000.

Thesis Bootcamp makes ‘writing up’ fun and social – and it helps a lot of people finish.

The buzz around the ANU Thesis Bootcamp has made it world famous (we even got a write up in Nature). ANU management loved Thesis Bootcamp too – because it largely fixed the problem of people dropping out near the end. We proved it with numbers by keeping meticulous records on who did bootcamp over five years. We then used statistical methods employed by medical researchers to study the outcomes of people who were ‘treated’ with bootcamp and compared their outcomes to the ‘non treatment’ condition (never attending). We proved the attrition rate amongst bootcampers was 15% lower than the rest of candidates at ANU.

Cutting the attrition rate from 22% to 7% amongst participants was a massive achievement, but to tell you the truth, we always considered Thesis Bootcamp a failure.

The fact we even needed Thesis Bootcamp meant people weren’t taught how to become productive writers early enough. It’s much better to try and avoid the Feedback Loop Of Shit forming in the first place than to try and stop it when it starts. And our data told us this story too. While Thesis Bootcamp does help some people finish, it doesn’t work for everyone. Around three quarters of the people who came to bootcamp graduated not long after. While most of the rest stayed in program, rather than dropping out, many didn’t finish – sometimes for years. We had to face the fact that, for some people, Thesis Bootcamp just prolonged the agony.

So, how do we help the people stuck in the Feedback Loop of Shit?

The first thing is to stop it happening in the first place by making sure people have the skills they need earlier. Thanks to some serious investment of money by ANU, we embarked on a project to adapt the basic bootcamp model to other writing tasks. We ended up with three writing bootcamps, which can be done in sequence:

The pandemic hasn’t been easy, but we moved our boot camps online without satisfaction dropping. After two years we are seeing signs of success. The demand for the ’emergency’ Bootcamp to write 20,000 words has dropped significantly.

To replace our ’emergency’ Thesis Bootcamp, we started a new program called ‘The Home Stretch’, loosely based on the Accelerated Completions Program at Latrobe university. The idea of The Home Stretch is to support anyone doing the Write Up, whether or not they are in crisis.

We know that people who join The Home Stretch will have different needs:

We gathered everyone who signed up to the Home Stretch into a Microsoft Teams site. This gave them access to shared calendars, chat channels, videos, goals tracking sheets and resources:

To this we added some specific program elements:

We also did something radical – we just asked people what else we can do to help.

It’s easy to infantilise people by assuming they need help, rather than access to resources, like space, time and money. Universities don’t have infinite resources, but we do have some. Sometimes all it takes is a bit of creative thinking to solve some of the problems the Feedback Loop of Shit produces.

For example, some of our Home Stretch people have moved away from Canberra and lost their campus office. Others find themselves sharing their home offices with family members who have switched to working from home. Some people are just desperate for a change of scene after so many months of pandemic isolation.

We had a number of unoccupied rooms in our corridor. So we scrounged some random furniture left around the building and set up two spaces: ‘The Garret’ (a small room with one desk) and ‘The Writers’ room’ (a room with two desks and a small library of books on writing and doing a thesis):

We’re still early in The Home Stretch, but I’m hopeful we’ve found a way to help people break the Feedback Loop of Shit. If you are stuck in a Feedback Loop of Shit, recognise you probably need some targetted help from your university to break out of it. Don’t let shame stand in the way of asking for it.

As a therapist once said to me: ‘only nice people feel shame’. Shame is an important emotion: it’s one of the ways we socialise ourselves into communities. We’ve certainly seen a lack of shame by politicians lead us to dark places lately. But shame is a pointless emotion in the context of the Feedback Loop of Shit. If you’re smart enough to get into a PhD, you should be able to get out again, holding that piece of paper. And your university should be invested in making sure that happens. You might be surprised what help is available if you ask.

I hope your head in a bucket time is brief and solidarity if you are in the Feedback Loop of Shit. If you’re an ANU student, please get in touch via email.

Tags: The Write Up