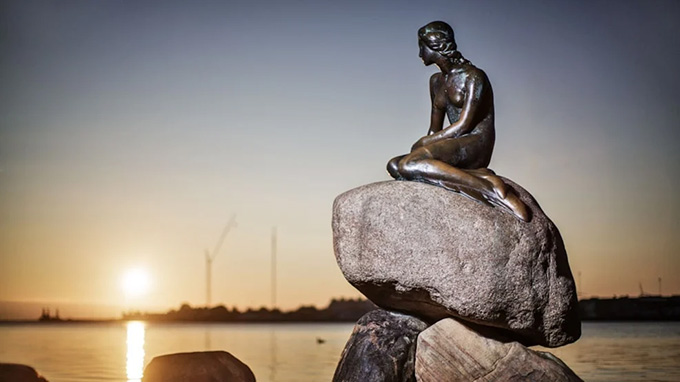 The new live-action adaptation of The Little Mermaid has garnered surprising negative reactions. The trailer for the film, which will be released in 2023, received millions of “dislikes” on YouTube due, apparently, to the mermaid being played by Halle Bailey, a black actress.

The Walt Disney cartoon , released in 1989, on which the new film is based, featured a red-haired mermaid named Ariel, and a singing crab with a Jamaican accent. The vast majority of recent reviews argue that a dark mermaid character would not live up to the original fairy tale’s intent.

Yet fairy tales have always been readjusted over time. Disney’s 1989 film was already radically different from the work of Hans Christian Andersen, a writer on the margins of society, bisexual, and unable to express his desires. Far from being the romance dear to Disney fans, his Little Mermaid is in fact the story of a tortured and unrequited love, written when the man he was in love with was getting married.

Cinderella, from Asia to Europe

The outrage over fairy tales that play with ethnic and cultural codes is unwarranted. Most cultures are replete with variations of folk tales, which can be found in every country in the world. The way we tell them has evolved, too. Initially transmitted orally, they were the subject of literary versions, from the 17th century, cinematographic or television versions and  games, from the 20th century  .

It is precisely through these constant adaptations to new audiences and cultural standards that fairy tales have endured.

Thus, the earliest known version of Cinderella , Yeh-Hsien is Chinese. It was published around 850, while that of Charles Perrault, which inspired most of the adaptations that we know today, dates from 1697. And it is not his godmother but fish bones that go grant Yeh-Hsien ‘s wishes . If fairy tales were to “belong” only to the first culture from which they emerged, logic dictates that Cinderella should be Chinese.

The suffering of the Little Mermaid

Walt Disney’s animated adaptations, beginning with 1937’s Snow White , have come to be the cultural prism through which we view fairy tales. This is one of the reasons why we are no longer aware of the various origins and traditions that surround them. And these films, intended for a family audience, are a sanitized version of tales that are often much more appalling and disturbing.

Unlike Walt Disney films, Andersen’s The Little Mermaid is a tragic story of extreme suffering and sacrifice. P. L. Travers, the author of Mary Poppins , wrote that she disliked the mermaid’s slow agony and found Andersen’s “tortures disguised as piety” “demoralizing”.

Andersen’s tales are essentially peopled with small and delicate characters who arouse our sympathy, whether their fragility is due to poverty and lack of care, like the “Little Match Girl” or to their difficulty in moving, such ” Little Thumbelina” that needs to be transported from one place to another. The Little Mermaid feels like blades are being driven into her feet with every step.

The Little Mermaid is also a prime example of Andersen’s emphasis on female sacrifice and suffering. She has her tongue cut out by the sea witch, who reduces her to silence. She nevertheless retains her delicate femininity, and a “light and graceful gait” on hard-earned legs at the cost of acute pain.

The mermaid saves the prince twice. She first risks her life to help him during a shipwreck. Andersen’s fairy tale is not a love story, however, since the prince feels nothing towards the mermaid. Although impressed by her devotion, he regards her as a child, or an animal. He even allows him to “sleep on a velvet cushion at his door”.

But the Little Mermaid’s greatest act of self-sacrifice is seeing the prince marry another and hold the bride’s train while thinking “only of her impending death and all that she had lost in it.” world “.

The sea witch had promised her that by succeeding in making herself loved by the prince, her soul would become immortal. Otherwise, she would die, heartbroken, the day after his marriage to another, and all that would be left of her would be a little foam on the tops of the waves. When she has to kill the prince to rejoin her family and resume her mermaid form, she prefers to sacrifice herself.

Andersen’s sad life inevitably influenced the story of his downtrodden and pitiful characters. That of the Little Mermaid is intimately linked to the author’s own feeling of isolation and rejection.

Andersen was an outcast who never married, and perhaps never had sex. However, having fallen in love with both men and women, he would now be considered bisexual. His inability to express his desires stemmed from a series of complex psychological problems.

Andersen felt a one-sided love for one of his friends, Edvard Collin. His biographer Jackie Wullschläger notes that The Little Mermaid was written at the height of his futile obsession with Edvard Collin. When the latter married in August 1936, Andersen preferred to avoid going there and stayed on the Danish island of Funen where he continued writing The Little Mermaid .

We can consider that the failure experienced by the Little Mermaid in her attempt to marry the prince and thus become immortal is none other than Andersen’s rejection of the idea that immortality depends on shared love. It is likely that Andersen the bisexual identified with the Little Mermaid, who did not consider herself part of humanity.

Andersen wrote that he consciously avoided the principle of other mermaid stories, such as “Ondine” , written in 1811 by Friedrich de la Motte Fouqué, according to which human love makes it possible to acquire a soul:
” That does not make any sense ! […] I would never endorse this kind of thing. I let my mermaid follow a more natural, more divine path. »
Andersen’s tales frequently highlight his Christian ethic. The path to salvation through God that he traces presupposes a joyful acceptance of pain, suffering and humiliation. Maria Tatar emphasizes that her characters welcome death “with joy”. They “blame themselves for their sins and advocate piety, humility, passivity and a whole series of other ‘virtues’ aimed at promoting a submissive attitude”.

Most of Andersen’s characters are female. In the 19th  century, fairy tales such as those of the Brothers Grimm generally sought to target the behavior and morals of girls . Regarding the Little Mermaid, the fate reserved for her throughout the story can be interpreted as a punishment inflicted on her for having felt a sexual curiosity towards the prince. It is also a way of warning her against any desire to leave the marine world to which she belongs.

At the end of Andersen’s tale, the little mermaid is transformed into foam and then into a “daughter of the air” likely to obtain a soul after three centuries of compassion and abnegation. There is no doubt here about the function of moral education attached to it. Young readers are told that their good deeds will cut The Little Mermaid (and other Air Girls) wait time by a year, while bad ones will lengthen it.

Walt Disney’s The Little Mermaid cartoon is a radical departure from Andersen’s fairy tale. Some of these changes reflect changing attitudes about the purpose of children’s stories. Childish characters making terrible sacrifices and experiencing an unhappy end are now rare.

Disney’s transformation of a tale of salvation and religious devotion into a simple love story is just one example of how fairy tales adapt to new contexts. The new live-action adaptation, starring Halle Bailey, which seeks to make ethnic minority children feel like they are portrayed in fairy tales, is just a new twist on the story.

This desire to diversify adaptations of fairy tales is based on the queer side of The Little Mermaid . We see the parallel with Andersen’s bisexuality and the experience of transgender individuals. Note, in this regard, that the largest British organization supporting transgender, non-binary and gender-diverse young people is called Mermaids .

No wonder people from all walks of life are captivated by the story of a mermaid who finds no place in the human world she desperately wishes to belong to, be it a famous 19th century Danish writer or  a young African-American woman today.