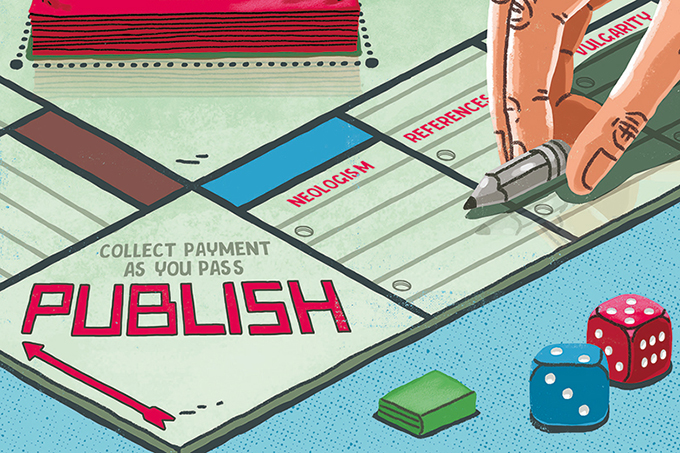 This must be in two parts, separated by a colon. The fragment before the colon uses a colloquial expression preferred by your research subjects, something grammatically dubious and profane. This is placed in quotation marks to demonstrate your personal distance from it. The short sentence after the colon establishes your knowledge of the chosen theoretical framework, and alludes to your method.

Strike the necessary balance between showing how many people have already researched this topic and demonstrating the uniqueness of your study. Identify a “gap” in the literature, but head off objections that the “gap” is there for a good reason (such as that it is a worthless thing to study) by using terms such as “urgent” and “unprecedented”. Describe how and why your topic is socially relevant, and justify it with a link to a well-regarded news source. Avoid acknowledging the irony of publishing a socially relevant article in an academic journal.

Provide a multitude of references that show the complexity of your thought and its embeddedness in the literature. In this section, be especially careful to use the passive voice to confirm your neutrality. “Some scholars have been found to define the problem this way (eg, author from long ago, author from not so long ago), and others have been found to define it in this other way (ditto). There are studies to support earlier findings (eg, multiple authors) and there are studies to support later findings (ditto).” The “eg” is essential as it confirms your vast knowledge of the literature: you could have cited many more sources if space had permitted. Mention this in a footnote.

Resign yourself to excluding from your theoretical framework the manuscript you wrote with co-author X, who stopped responding to emails during editing, and the MA thesis you should have co-published last year if your student hadn’t decided that a marketing internship was more important to pursue than a published journal article.

You have chosen a mixed methods design. This serves to unnerve both qualitative and quantitative readers. Offer an explanation of the quantitative survey research that is just complex enough to confuse readers with only an elementary knowledge of statistics. Pepper your description of the in-depth, qualitative interviews with an assortment of terms (eg, naturalistic, reflexivity, phenomenological) that emasculate the quantitative researchers. And sprinkle the whole method section with references justifying your approaches: authors who did similar surveys; authors who did similar interviews in an entirely different subject; and authors who combined surveys with follow-up interviews in different ways. These last references are totally irrelevant to your paper, but that’s OK. No one will check, and they sound impressive.

This section allows a break from external reference validation. In other words, it’s in your own words. Present your findings numbers first, and illustrate the significance of some findings over others by adding asterisks. The qualitative findings are, in essence, an expansion of the colloquial quotation in your title. The longer quotes are indented to emphasise that this is not the sort of language you would use. But their syntactic inferiority and vulgarity serve to amuse the reader. Expletives really make Table 3 come alive.

With an attempt at conversational academic language, summarise your findings. Use the present tense to emphasise the urgency of the work. Then present four thinking points. The first of these was suggested to you by reviewer#1. The second came to you under a very hot shower in the midst of lathering your hair. The third repeats a discussion point raised in a 20-year-old academic article that you’re confident no one has read. The fourth was suggested to you by reviewer#2. The reviewers will be satisfied now that their suggestions are incorporated. They will feel as if they are a part of your work; if not in name, at least in spirit.

As the discussion reaches its conclusion, turn up the grandeur and eloquence of your language. This illustrates your intellectual capacity for connecting your conclusions to the broader (academic) world. Choose an ordinary word or two, like “pattern” or “concrete”, and add “isation” to the end. You know it, and your readers know it: the creation of long neologisms is the essence of theoretical progress – especially if the neologism in question ends in “isation”.

Don’t be shy: self-citation is fine. Your detailed proof of your paper’s legitimacy includes five articles you wrote yourself, and three that you co-authored with others. This number would be higher if it weren’t for the incompetence of some of those mentioned in the theoretical framework. It isn’t important that the self-referenced articles are only sort of connected with the topic of the current piece: their presence further validates your qualifications anyway.

It isn’t necessary to read all the articles you cite: scanning their abstracts works just as well. And don’t feel guilty about including the six articles suggested by reviewer#3, who did not comment on your introduction, theoretical framework, method or discussion, but insisted that you include insights from his friends, collaborators and obscure academics he regards as brilliant. If such minor concessions are what it takes to publish such a brilliant article as yours, they are well worth it.

Author Bio: Janelle Ward is an assistant professor in the department of media and communication at Erasmus University Rotterdam.