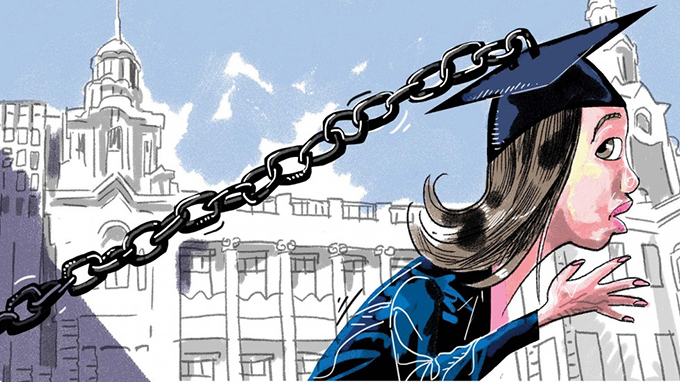 Joe Knott, one of the Republicans who dominate the University of North Carolina Board of Governors, published an op-ed on May 25 that imagines an alarming future for higher education under the headline “We need more conservative professors. Here’s how we can do that at UNC.”

Knott generously declares his support for academic freedom: “If scholars are not free, the search for Truth is over and with that goes the value of the individual, the sanctity of conscience, freedom of speech, religion, and Western civilization itself.” But allowing professors to think for themselves creates a problem for Knott, since many of these professors are liberal.

So Knott has a “solution”: “My proposal is that we establish at our flagship university an Honors College with the stated purpose of bringing to North Carolina the best, most respected and accomplished scholars in the world who love and defend Western civilization.” This is not an “Honors College”—it is a Conservative College. What Knott is proposing is a massive affirmative action program for conservatives: An entire segregated college where only conservatives are allowed to be hired.

Knott declares dramatically, “With intellectual unanimity comes intellectual ennui.” But the University of North Carolina has neither. What it will have, if Knott gets his way, is the first official ideologically-based hiring program for professors at a public university.

The scope of Knott’s proposed right-wing college is amazing: “The Honors College would be able to hire and fire, grant or deny tenure, accept or reject students according to the college’s own standards and judgments without any input, veto, or bureaucratic delay or control from the existing faculty.” Knott despises his own faculty so much he doesn’t even want allow them any “input” into any decision at his Right-Wing U. Knott wants a segregated faculty with a segregated student body all in service to his right-wing ideology.

And it’s no small irony that Knott speaks about the fiction of conservatives having their courses “disallowed” when the only professor at UNC who experienced this is Jay Smith, the history professor banned by the administration from teaching his critical course on college athletics.

Knott has some very peculiar and specific notions of what his Right-Wing U would look like: “The university would enforce absolute standards of civility and respectful discourse.” I don’t know what “absolute civility” is, but I certainly don’t trust Knott or a university to enforce it on anyone.

Knott wrote: “The only risk is we settle for half measures. The existing faculty might well agree to the hiring of five or ten new professors, but they will insist on keeping them under the authority of the existing faculty.” It is breathtaking that Knott considers the hiring of ten conservative professors for their political views to be a “half measure” inadequate for the degree of thought control he demands.

Knott reports that he has already taken it upon himself to determine who will help run the new Right-Wing College:  “Dr. Robert George of Princeton University has agreed to be part of a steering committee for such a new endeavor.”

One might hope that an idea this crazy and expensive, one that breaks all of the campus policies and shared governance rules while violating the First Amendment’s ban on politicized hiring by a public university, would be quickly dismissed. But North Carolina is a crazy place. The 28-member Board of Governors has only one Democrat, and it has repeatedly shown terrible judgment in imposing its partisan agenda on the university. The Board has capped spending on need-based financial aid to try to keep out poor students, fired the university president (a Democrat) and installed former Bush education secretary Margaret Spellings, and ordered the closing of the Center on Poverty, Work, Opportunity (because its director, Gene Nichol, had dared to criticize Republicans), and imposed a “free speech” policy to punish campus protesters.

Knott himself filed the motion in 2017 to ban the Civil Rights Center and all other centers at UNC from engaging in litigation, declaring that the law school “needs to stick to its knitting” and not do legal filings or other things that lawyers are known for doing. So when Knott talks about the danger “if scholars are not free,” he knows of what he speaks.