The great resignation is a buzzphrase that first appeared in May 2021, and has struck fear into the hearts of employers ever since. Coined in the US, the term refers to the unprecedented rise in the number of workers resigning from their jobs following the pandemic.

There has since been a huge amount of research trying to work out why this has happened. Are workers quitting work entirely, as the pandemic makes us reevaluate our priorities? Or are they quitting to pursue their dreams in a different career?

We’ve been looking at to what extent this great resignation narrative holds true in the UK using data from the Labour Force Survey by the Office for National Statistics. “Great” of course has two meanings and we’ve looked at both the magnitude of changes in resignations and whether these changes were a positive force for workers’ career progression. We also looked at whether any rise in resignations may have worsened the labour shortages faced by firms.

The rise in resignations

There was indeed a great resignation in the UK, according to the data. The chart below shows that resignations rose sharply from the end of 2020 and significantly exceeded their pre-pandemic levels in the final quarter of 2021.

However this is not because workers decided to abandon work and leave the labour force. Instead, we are seeing a rise in workers resigning primarily to start new jobs for other employers. The only age group where there has been an increase in people leaving the labour force has been among the over-50s, who have been retiring in larger numbers than normal. 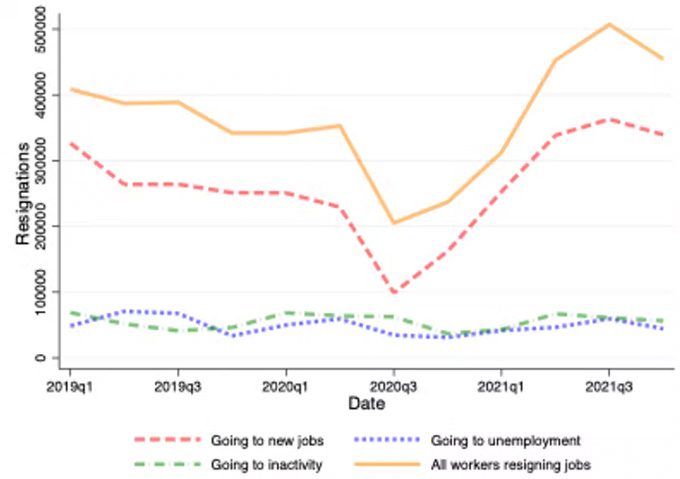 Note: All data is from the two-quarter longitudinal Labour Force Survey. The series shows the number of workers (aged 16-65) who resigned their job in the previous quarter, by destination post resignation. A stable seasonal filter is applied to all series. ‘Going to inactivity’ means they are no longer working. Authors provided

So, why have people been resigning to work for other employers in above-average numbers? Some commentators have suggested that the rise has been propelled by individuals looking to make drastic career changes, as workers reevaluate their lives after the pandemic. In fact, this is not borne out by the data. 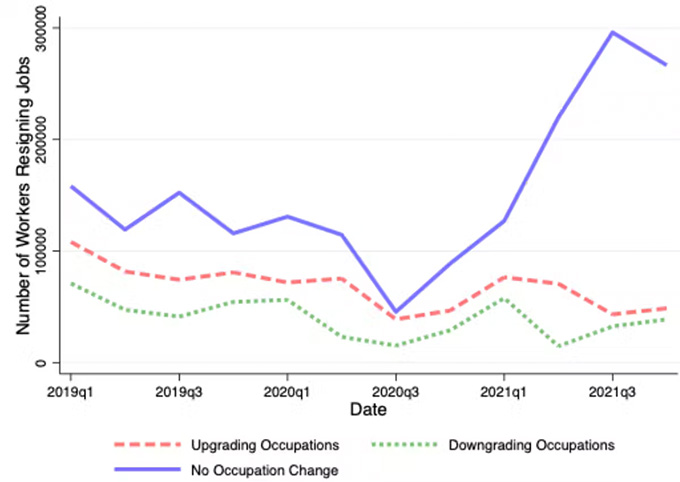 Notes: all data is from the two-quarter longitudinal Labour Force Survey. The series shows the number of workers (aged 16-65) making a given occupation transition after resigning their last job and starting a new one in the previous quarter. A stable seasonal filter is applied to all series. An occupation upgrade (downgrade) is defined as a worker moving to occupation with a higher (lower) Standard Occupation Code as these codes have natural interpretation as a skill ranking. The codes are: 1. Managers and senior officials, 2. Professional occupations, 3. Associate professional and technical occupations, 4 Administrative and secretarial occupations, 5 Skilled trades occupations, 6 Child and Animal Care, Leisure and Other Service, 7 Sales And Customer Service Occupations’, 8 Process, Plant And Machine Operatives, 9 Elementary. Authors provided

Even if workers did not substantially alter their career trajectories with these moves, it has been good news for their wages. Workers moving jobs within the same occupation have historically achieved higher wage gains than those staying at the same employer, and sure enough in 2021, workers moving to new employers saw higher gains than those that did not move.

For workers that have changed jobs, this will be providing some respite against the rising cost of living. Nonetheless the overwhelming majority of workers have stayed in their job and will therefore suffer more from the cost of living crisis as wages fall in real terms.

Could the rise in resignations be contributing to rising labour shortages? The latter half of 2021 saw many reports of firms facing difficulties filling vacancies, raising the possibility that rising resignations could be causing these recruitment difficulties. We found that there was a higher rate of resignations among workers coming from the five “shortage” sectors finding it hardest to recruit people: construction, manufacturing, accommodation, health, and food, administration and support.

However, most workers were resigning to go to new jobs within the same industry, so they are unlikely to be the root cause of employment shortages within their sectors. Instead, the reasons for recruitment difficulties differ by sector. For example, the manufacturing sector has been hit by early retirements, whereas the accommodation and food sectors are suffering from a lower inflow of younger workers.

Instead of being the cause, the increases in resignations in these five sectors are more likely to be a symptom of their labour shortages: employers “poaching” staff from rivals by offering better conditions as the economy rebounded from the depths of the pandemic. Losing staff will obviously have created additional pain for employers who were already struggling to recruit.

In sum, contrary to what some might be hoping, the so-called great resignation of 2021 has not significantly improved the career paths of workers. Workers who have been willing and able to change employers have been rewarded with improved pay, while wage growth for those who have stayed put will be slower and insufficient to offset large increases in the cost of living.

Finally, it’s worth noting that the rates of vacancies, resignations and wage growth all slowed in the fourth quarter of 2021, which is a signal that the rebound in labour demand has faded. So if you weren’t part of the great resignation, you may already be too late.