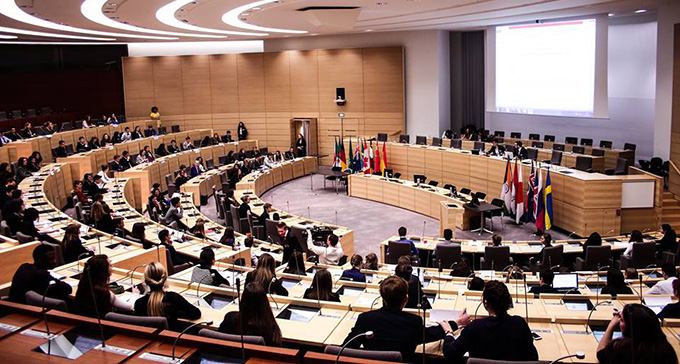 The coronavirus pandemic has raised major questions about our collective economic and social futures – in academia as much as in the wider population.

These questions don’t just revolve around international students. The cancellation of many international academic conferences highlights problematic assumptions about research distribution and exchange – and suggests how the process could be made more equitable. Long-distance travel leads to collateral intellectual and ecological damage, which can no longer be ignored. Indeed, re-evaluation is inevitable given the recent reports suggesting that the aviation industry will be changed forever by the pandemic.

Since 1945, Western academia has relied on two models. The first was patriarchal and class-bound: “influential” and “esteemed” senior academics promoted predominantly white male favourites within existing knowledge networks. The second is the “conference model”, in which usually Western-based scholars have the opportunity to showcase their work at numerous national and international meetings.

The model’s stealthy emergence and growth has largely been a function of a system in which individual scholars are expected to market themselves relentlessly in pursuit of “star” status. But this model of knowledge production relies on economic surpluses to fund all the globetrotting. And, apart from the ecological degradation, it is riven by socio-economic, class, race and gender divides.

It depends on the hypermobility of scholars in the Global North. The ease with which this relatively small group of global scholars can attend conferences in the Global South contrasts starkly with the experience of scholars based in the Global South travelling in the other direction for research, teaching work or conferences. While a few are able to gain entry to the international academic circuit – to ensure “reciprocity” in the research process – this involves going through a gruelling, humiliating and often unsuccessful visa application process.

Junior scholars across the world also lose out. Research grants bring some scholars relief from teaching and administration, but their obligations are often covered by young academics on insecure contracts, with no guarantee of future work. Despite the fine research to which such “buyouts” have led to, all those “star researchers” who have benefited from it are implicated in the intensifying inequalities.

With hypermobility stalled, this model is in crisis. Yet better models can grow. For instance, with the support of the British Academy, the African Studies Association of the UK – whose annual conference, due to have been held at Cardiff University in September, has been cancelled – has spearheaded a Writing Workshop programme since 2009. This initiative responded to an ongoing series of discussions, facilitated by the Association of Commonwealth Universities and the British Academy, around Africa-UK research collaborations. The writing workshops help to build African research networks and provide mentoring for early and mid-career scholars, in cooperation with senior scholars from institutions across Africa.

Scholarly associations should expand this kind of project as a core intellectual activity. They could also use the time released from organising vast conferences to embark on some urgent tasks: fighting the attempts at retrenchment that the pandemic will inevitably lead to; protecting the rights of female, black and ethnic minority scholars in the West, who will be disproportionately affected; and building enduring and genuinely collaborative links with scholars in the South.

This pandemic should make us look hard at our paradigms of knowledge production and call into question how structures in the university sector have intensified global inequalities. Other models can emerge, building on local needs and ideas in the South, alongside less hierarchical models of funding and research in the North.

Academics who have grown up with conferences will find it hard to imagine life without them. However, the world cannot afford any more global academic jamborees.

Author Bios: Ambreena Manji is professor of land law and development at Cardiff University and president of the African Studies Association of the UK. Carli Coetzee is a research associate at the Oxford School of Global and Area Studies and editor of the Journal of African Cultural Studies. Ola Uduku is a professor at the Manchester School of Architecture and vice-president of the ASAUK. Toby Green is senior lecturer in lusophone African history and culture at King’s College London and won the British Academy Nayef Al-Rohdan Prize for Global Cultural Understanding.