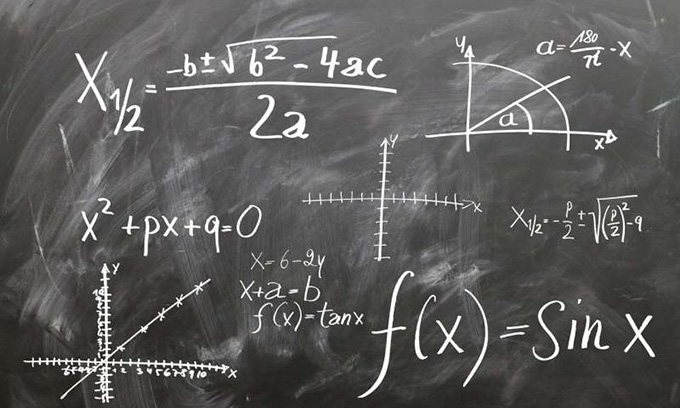 From time to time, mathematicians recall this paragraph from Galileo Galilei’s The Assayer :

The [natural] philosophy is written in that great book that we have open before our eyes (I mean, the universe), but it cannot be understood if one does not first learn to understand the language, to know the characters in which it is written. It is written in the mathematical language and its characters are triangles, circles and other geometric figures, without which it is impossible to understand a word; without them it is like turning in vain in a dark maze.

Today, in the midst of a pandemic, we refer to ideas such as “flattening the curve” (making the derivative smaller, that is, lowering the growth rate) or the simpler fact of leaving a “safety distance” ( We should not be within a radius of less than two meters around another person because we are at risk of becoming infected).

We also know that there are teams working on models that predict how the epidemic spreads and therefore also help determine how it should be controlled. If life had passed like just a year ago, without the now dreaded COVID-19, we would probably be, already at the end of the course, talking about the promotion of STEM vocations (I prefer to use this acronym to the Spanish-language CTIM because it places us in an international context ) highlighting the desirability and need for young people to study careers based on technology from different points of view, one of them labor, as the European Union already showed in 2015.

In these days of confinement, technology has helped us work from our homes. If it was already found last year that technology-related jobs were in high demand, now the importance of jobs in this sector has become clear.

We have been able to communicate with our relatives whom we could not visit thanks to electronic devices ( tablets , computers, mobile phones …) and also make necessary work meetings through different platforms (sure that each reader is able to mention at least 5 of these video conferencing systems).

Teachers have become youtubers for a while and we face the dilemma of how to organize exams electronically, with all the difficulty that this entails. Beneath the algorithms that make those devices work are the math. There are cryptographic algorithms that allow us to digitally sign documents. Other algorithms encode our image and our voice so that they travel, like zeros and ones, through the network.

And at this moment, when we have been claiming technological careers for years and when we are using technology in all areas of our lives, a project for a new educational law appears that leaves the door open for mathematics, the language in which Scientific and technological knowledge is written, they disappear as a compulsory subject in Bachillerato. The project eliminates the obligation to study Mathematics in the Bachelor of Science and Technology and Applied Mathematics in the Social Sciences itinerary (now, Humanities and Social Sciences). This is surprising to say the least.

But there is nothing new under the sun: this has already happened and I have witnessed it. I work at the Polytechnic University of Madrid and at one time I had students who came to study engineering without having studied either mathematics or physics in High School. Obviously, these students were not able to pass the first year of a career that was already hard for students who had completed them.

With the LOMCE it was difficult, but it was

Failure to pass has bad economic consequences because the price of the second and successive enrollments of a subject become very expensive. The LOMCE has had bad things, but also some good and sensible things, such as the fact that it is compulsory to study mathematics in the Baccalaureate of Sciences and in the Social Sciences itinerary. The latter also cost. It was possible to achieve almost at the last moment that, for example, future students of Economics compulsory study in mathematics in Bachillerato.

Poor performance in some races

If this situation is reversed now we will have to see things like what happened in the past. My experience with students who had not studied mathematics in high school is a perception, but research has been done along these lines: the low performance of students who had not previously studied mathematics and entered economics faculties is demonstrated . It is not the only case: what I intuited with my engineering students was also seen by colleagues from the University of Valencia, but they quantified and published it .

Earlier we mentioned a study of the European Union, but also the OECD has made a report on the future of education and work and has an impact on the same points. Every few years we worry that Spain does poorly on the PISA tests and other factors are almost always blamed.

It should be recognized that, in reality, education laws, work environments and curricula that are truly adapted for the 21st century are not being developed. Both the Ministry of Education and Vocational Training and the autonomous communities do not accept responsibilities, but events such as the one we are commenting on today influence the results in PISA and TIMSS (more focused on mathematics).

And Spain will continue in inferior conditions compared to those that have better-trained professionals capable of responding to the technological needs of today’s world.

It seems that here we remain faithful to “Let them invent!” and we missed Charles Percy Snow , who was aware that two of the groups to which he belonged and in which he had good friends were unable to agree.

Snow was a novelist and scientist, a doctor of physics (although he also worked as a politician). In 1959 he gave a conference that was later reflected in the book The Two Cultures and the Scientific Revolution . He gave as an example how the world changed in the Industrial Revolution regarding education, the contents of the programs, the technological revolution of the moment and another that was to come. We already have it there. Mathematics plays a major role in that revolution, and we must help our youth be prepared for it.

Author Bio: Fernando Blasco is a Full Professor of the University of Applied Mathematics. Area of ​​interest: education, dissemination and scientific communication at the Polytechnic University of Madrid (UPM)