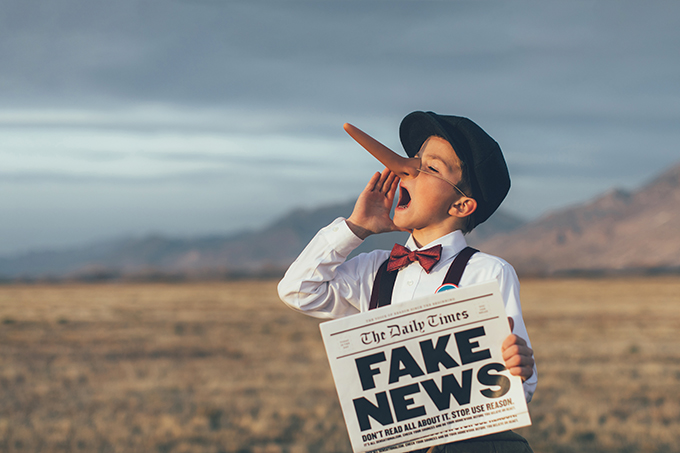 The encounter with individuals holding conspiratorial speeches or relaying “foxys” is always surprising. Just as the Parisians of Montesquieu , meeting for the first time people from elsewhere, exclaimed “How can one be Persian? », the temptation is great to react with amazement and to ask « How is this possible? »

When it comes to people who are relatively close and who are considered capable of critical thinking, another question arises: “How did they get there? What are the cognitive biases – or the failures of integration into a society that remains, whatever one may say, democratic – likely to provide the beginning of an explanation? Or is it, in a time quick to accuse the school of all evils, of a failure of the school system, incapable of adapting to the new regime of “post-truth”?

Be that as it may, we have all observed that, when we undergo such a confrontation, it is very late to oppose our interlocutor with rational arguments or facts that we consider established. The dialogue then seems to pit two stories against each other and, in this game, it is not certain that the criteria for choosing the “best” necessarily have to do with the truth. The plausible narrative, the discourse most related to the anxieties of the speakers are those which most often risk gaining support.

An injunction to “tell a story”

It would be a shame, however, to stick to psychologizing explanations. The concern is that there is behind this false information, intentionally or not, a “share of truth” as they say. From the share of truth to the truth “to be revealed”, there is only one step, which distrust (towards institutions, the media then qualified as “official”, etc.) helps to cross.

There is a deep reason here: everything is now put into a story, whether it is marketing, gambling, politics, or even science itself. Christian Salmon invites “to be wary of a narrative thought increasingly exploited by the spin doctors of political communication, the strategists of marketing or the art of war. »

It is true that no social activity seems spared today and it would be unfortunate to confuse the phenomenon with the thermometer. The roots of a mistrust that is now widely distributed are not to be found in an easier expression or staging of the self via the “digital” or social networks but more in a generalized injunction to tell a story that closes the public expression. The interpretation of the facts seems in fact to be increasingly limited by accounts which present themselves as authorized commentaries. Without wanting to excuse them, the epidermal reactions (too often low level) that we see on social networks (accentuated it is true by a disempowering anonymity) certainly stem in part from this lockdown.

Let us add that these stories are not always bothered with the truth, or even manipulate it . There is only to underline here the power of alternative narratives conveyed, with an often unsuspected scale of means, by pressure groups or illiberal States, the invasion of Ukraine by Russia by providing daily examples , the most enormous being certainly the alleged Russophobia of the Ukrainians, “a first step towards a genocide” according to Putin .

Other stories, without knowingly misleading, have more, in the case of marketing for example, plausibility as a horizon. They are then similar to fictional discourses to which it is possible to adhere. Let us cite here the promotional speeches on artificial intelligence, supposed to bring about a better world. This generalized state suggests that the most relayed speeches, because carried by institutions, including democratic ones, or by media with a large audience, or even corresponding to a majority opinion, are necessarily suspect.

Faced with these “mainstream” narratives, it is more profitable to appear as an alternative narrative that seeks, by braving obstacles, to bring out the truth in the face of a more powerful narrative. Relays of Russian propaganda in Western countries often present themselves as such.

We take the measure, day after day, of the ravages of a general mistrust. It must be recognized that it can sometimes be justified when there is a collusion of interests between multinationals and scientists, when scientists go beyond their area of ​​expertise in the media, when the media and politicians show a suspicious proximity, etc

How to cure it ? Fact-checking tools abound. All the major newspapers and news agencies now have a dedicated service: in France, let’s mention that of the newspaper Le Monde , Liberation or AFP . Many sites specializing in the fight against misinformation have been created. At school, media and information education (EMI), whatever may be said about it and whatever its insufficiencies, exists and in educational establishments the teacher-librarians do a remarkable job: the 33 th  edition of the “week of the press and media in the School” organized by the CLEMI .

It is obviously necessary to accentuate the effort but I am not mainly interested in this article in the people who will be able to use all the resources made available when a doubt about information arises. There is a reflection to be carried out on the gestures to be inculcated upstream of a specific education mobilizing a rich panoply of tools .

The track put forward here may seem paradoxical and likely to aggravate the evil: it would be a question of learning to doubt! But not anyhow. It is not a question of introducing the nihilistic doubt which applies to everything, without discernment, and which tries to pass off ignorance of the facts and the mechanisms of communication for the most accomplished manifestation of the critical spirit. . But the constructive doubt, the one that leads to a temporary suspension of judgment, pending further investigations carried out in a methodical manner.

The spirit of the scientific method

This doubt, which pushes in a rational approach to ask the “right” questions to then find elements of plausible answers, is none other than that which is practical in research. These answers are certainly provisional, in all debatable cases, but respecting the collective rules of discussion.

An objection can then be made: why want to introduce research methods to a wider audience when science is established in a sharp and specialized dialogue between peers? Because we are starting from an established fact: science, its results as well as its methods, are present in the public domain, through the figure of the expert, who is now omnipotent. The Covid-19 pandemic did not invent anything but exacerbated this heavy trend.

However, it would be completely irresponsible to contribute to this media exposure without giving the means to the public to welcome this information. It is a question of allowing them to subject them to a fruitful questioning, not to an undifferentiated and systematic questioning, the nuance is important.

Wanting to live up to this ambition requires another approach to the role of research in teaching and therefore upstream in teacher training. Research is still too often called upon to present the latest scientific advances in a discipline, more rarely to explain the methods. When the learning of these is put forward in school education, it is still too exclusively in the limited spectrum of experimental disciplines.

It would be necessary to put on the same plane the human and social sciences and their methods, sometimes considered “soft”, but infinitely better equipped to account for the human being in society whose behavioral springs are not only biological or psychological. In short, it is an art of questioning that we call, based on the methods of research and to be inculcated from an early age .