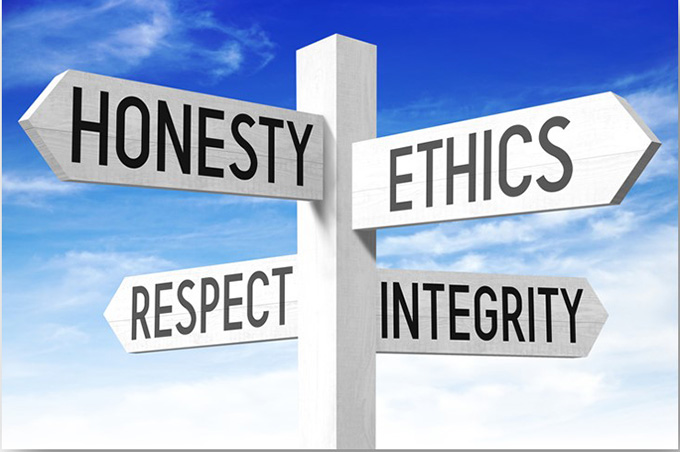 Wondering and thinking about what we do and what has an impact on our environment, personal, family, social and natural is to question our moral life. We attribute a moral responsibility to people based on their ability to act in one way or another and therefore freedom is a necessary condition for moral life.

The roots of morality are found in the freedom of the human being insofar as it is seen in the need to “choose” among a range of possibilities and, above all, said individual must make the right choice and take responsibility for it.

‘Good’ and ‘duty’ are the two fundamental moral terms and the human being, insofar as a social being, is necessarily also a moral being. And morality is a verifiable social fact in two ways:

When we rationally justify morality, we are doing ethics. Therefore, ethics is a reflection about morality, about the foundations of one’s own behavior.

Ethics (which is prescriptive) aims to establish and justify very general criteria that can be recommended as preferable and that allow a foundation of concrete moral norms (“something is a duty”) and, more generally, of moral judgments (“something is good”). Aranguren calls morality “lived morality” and ethics, “thought morality.”

Ethics is, therefore, the branch of philosophy that reflects precisely on good and duty, and is unfailingly linked to action and the practical and experiential dimension of human behavior. But only to stocks? And the omissions?

An omission is not doing something that one could (and sometimes should) have done and doesn’t do. Just as action consists of positive acting, doing, omission, on the other hand, it consists of not doing, not acting, and abstaining.

But not everything that a person does not do is an omission. We speak of omission when being able to do an activity and having some reason to do it, it is not carried out. Omissions imply avoiding an “expected” behavior in some sense (such as when parents do not feed or care for their children, or when those in danger are not helped) and these omissions can be not only intentional but also due to negligence and abandonment .

The example of euthanasia

However, it is not easy to distinguish actions from omissions. On the one hand, the very characterization of behaviors as active or omisive is determined by the evaluations made of these behaviors: people tend to classify the behaviors that seem morally more acceptable as omission and those that are most unacceptable to us as active .

For example, in matters as debated as euthanasia, it is argued that one cannot act to kill although it is permissible to omit to let die (limitation of life support effort).

But the question is complicated if one can kill through omissions (not supplying a vital medicine) and let die through acts (removing a respirator at the request of a patient) or if it is understood that there are omissions that deserve more moral reproach than actions. with identical results (letting a terminally ill patient die of hunger and thirst or giving him terminal sedation).

Ultimately, our prior assessment conditions in advance what we distinguish as actions and as omissions.

Furthermore, it seems that between actions and omissions, a wider range of possibilities can be considered: not preventing, facilitating doing, contributing. For example: pushing someone off a cliff into the sea constitutes doing harm; If I see that someone is going to jump into the water at the risk of his life and I do nothing, I do not prevent the damage; If I do not throw a rope that I have at hand, I allow the damage with my omission; if I don’t let someone else throw a rope at him to prevent him from drowning, I am facilitating harm.

Whoever facilitates or does not prevent damage does not initiate the causal process by which the damage is committed, but without their conduct, the damage in question would not be fully carried out.

And at this point we must talk about the dilution of responsibility and the ” spectator effect “, according to which the probability of intervening in emergency situations is inversely proportional to the number of spectators who witness them.

What is our responsibility as observers and connoisseurs of evil, but who do not act? Are neglect, passivity, indifference, apathy, or inaction ethically acceptable? We can think about it from the perspective of some of the most pressing and urgent global challenges of our time, such as poverty and exclusion, migration or climate change, which are clearly interrelated.

Ultimately, the ethical question does not pivot only on doing, but also and much on not doing and all the variants between one and the other. Doing nothing is obviously a way of doing something. As subjects of a world of spectators, profusely interconnected, we cannot evade our responsibility, neither by action nor by omission.

A world of unethical spectators in schools

This third Thursday of the month of November is World Philosophy Day. This November 19, 2020, the inclusion or not of the Ethics subject in the 4th year of Compulsory Secondary Education is also voted definitively in the Spanish Parliament.

Your Lordships have the possibility of doing or not doing, of making possible or not a rigorous teaching of the concepts, theories and arguments of ethics so that our young people, future generations, ask themselves the questions about doing or not doing and not becoming in mere spectators of a challenging future and to be built.

To do or not to do to be active subjects of social life. This is the question.