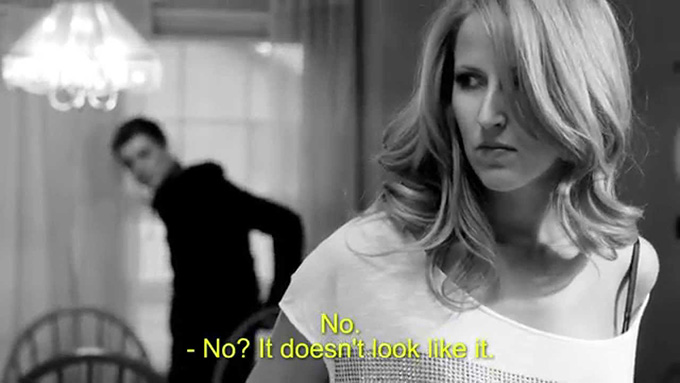 Access to films in the original language has been widely democratized, as has access to subtitles in different languages. If their objective is to make it possible to understand the dialogues of a film whose language is not known, they are more and more envisaged under an educational angle. Clearly, watching a film in a foreign language that we are studying would be a good way to acquire vocabulary in this language.

Nevertheless, depending on the level of learning where we are and the skills we have in the language of the film, the impact of subtitles on our understanding of the film is however quite variable. So, your film, with or without subtitles?

Understanding a film implies dealing with an audiovisual format, therefore multimodal, complex. The person viewing a film must in this case simultaneously process verbal and non-verbal information in constant interaction, through the visual and auditory perceptual systems. The objective of adding subtitles is to facilitate understanding, but this generates a new source of information with a text whose scrolling and rhythm are beyond our control. The different subtitle formats that can be used are:

It is quite easy to imagine that, depending on the language combinations that will be presented on the screen, the memorization of vocabulary in another language will not be done in such an effective way. The study by Bairstow and Lavaur examined two modalities that can influence vocabulary acquisition: on the one hand, the combination of languages ​​on the screen, and on the other hand the modality of presentation of the language (oral or written). .

The participants in this study were of French mother tongue, and were identified as having a low level in English. They were divided into the different viewing versions of the film: standard, intralanguage and reverse. While the authors did not highlight any differences between the intralanguage and standard versions, the participants who watched the film with reverse subtitles (dialogues in French and subtitles in English) obtained the best performance in terms of restitution. dialogue from the film.

The inverted version is therefore identified here as the one allowing a better restitution of the words in the language studied, suggesting that the semantic links between the languages ​​are more easily generated compared to the other viewing conditions.

Other researchers have highlighted a facilitating effect of intralingual subtitling on vocabulary retention. According to these studies, intralanguage subtitling would introduce positive redundancy, where standard subtitles generate lexical interference between languages.

We can have very different skills in terms of mastering the language of the dialogues of the film, and if we want to optimize the understanding of the dialogues we must therefore choose the combination of languages ​​that is the most suitable. Lavaur and Bairstow ‘s study examined the performance of film comprehension among beginner, intermediate and advanced participants in the foreign language.

If the performances of the participants of the intermediate group remain stable in the different conditions, the group of beginners has better performances in the interlanguage version compared to the other versions. More specifically, it is reverse subtitling (mother tongue dialogues and foreign language subtitles) that is associated with the best performance among beginners, links between languages ​​being generated more easily here.

Subtitles are subject to constraints relative to their place on the screen. Their display time is calibrated and, therefore, they cannot always correspond to the dialogues that are presented. They will therefore constitute a shortened, watered down version, which sometimes can cause problems since you cannot link the word written in the subtitles to that used in the dialogues.

Reading subtitles is difficult to repress, our eye tending to read the information presented to it automatically. In a study recording eye movements, D’Ydewalle and his collaborators showed that attention was diverted from the information presented by the image to the captions, which automatically decreases the attention time allocated to the actions that occur. on the screen.

In the context of the reception of a film, the presence of subtitles on the screen could therefore generate an effect of division of attention between the subtitles and the images, thus generating a high cognitive load .

This cognitive load could also be explained by the difficulty associated with processing two languages ​​simultaneously, and on two different modalities. The scientific literature has quite extensively documented the cognitive cost associated with a change of language, which results in particular in a slowdown in access to semantic information.

If we consider the methods of classic and reverse subtitling, they involve alternating rapidly between the linguistic representations of two different languages, which induces a cognitive cost resulting, in this context, in a difficulty in integrating the elements of dialogue.

We are interested in the influence of language changes when understanding films. By showing an extract from the film “Ana” (“Real Women have curves”, directed by Patricia Cardoso) alternating between dialogues in English and in Spanish in its original version, we were able to show that the moments of the film correspond to a language change were associated with poorer performance in terms of dialogue comprehension.

Two factors can therefore disturb comprehension: the alternation between languages ​​on the one hand, and the displacement of attention between the modes of presentation of the dialogues (written and oral) on the other hand.

The benefit of using subtitles is therefore to be qualified, depending on the objectives of the person viewing the film and their language skills. The subtitles will allow a better understanding of the dialogues and the situation in general, but they can also cause a deterioration in the treatment of the elements presented when their presence is not necessarily required (increased cognitive load and difficulties in guiding the viewer). ‘Warning).

It should therefore be borne in mind that the effectiveness of subtitles depends both on the combinations of languages ​​used and on the mastery of these languages ​​by the person watching the film.

In general, we can admit the fact that these media allow greater exposure to a second language and in this sense promote the acquisition of vocabulary. However, they do not put individuals in a situation of active use of this language, an essential condition for strengthening skills, particularly in oral expression.