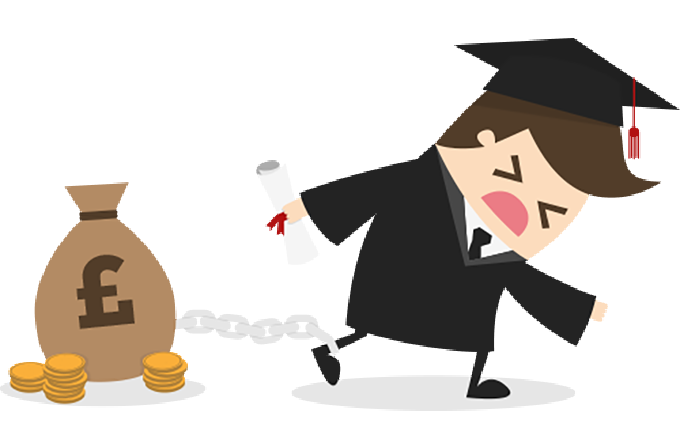 This outcome is due to the way the student finance system is currently set up. First time undergraduate students can borrow money for both tuition fees and maintenance. But unlike previous years when students from poorer households were also entitled to non-repayable maintenance grants, since 2016 this has been replaced with an “enhanced loan allowance” – which inevitably just leads to more debt.

Our recent research found that coupled with higher debts for the poorest students, the inequalities in the funding system are directly impacting students’ day-to-day budgeting, which is creating a number of issues.

Gaps in the system

While prospective students have been found to have significant concerns about the level of debt now associated with university study, figures show nine in ten undergraduates still take out maintenance loans. This is currently a maximum of £8,430 available for full-time students studying away from home, outside of London.

Eligibility for this type of funding is based on household income – which implies parents are expected to supplement student budgets. In this way, for many of these semi-independent young adults, parental support is a financial necessity.

But for students from low income families – not to mention care leavers, estranged, and mature students – it is not always possible to fall back on contributions from parents, as one student we spoke to explained:

For me, if my mum comes to visit me, and doesn’t need me to pay half of the petrol money, that’s a treat.

These students are then forced to make up this often significant shortfall. Most of the time this means either indebting their future – by using up savings or dipping into private credit – or indebting their present – by having to work part-time to make ends meet.

As part of our research into student experiences of funding university, we followed the second cohort of undergraduates under the tuition fee system that has been in place since 2012. We also continued our annual evaluations of available institutional financial support. We saw how poorer students often only had enough savings to balance cash-flow issues across their first year. When this money dried up, students highlighted their growing reliance on commercial credit, such as interest-free student overdrafts. These often start at £500 and can go up to as much as £3,000.

We found more students also turn to term-time work over the course of their studies. Our latest institutional survey suggests 37% of undergraduates work while they study full-time. This is consistent with national estimates which show a third of students work alongside their studies.

Term-time work does of course bring with it a number of benefits beyond improved cash-flow – think new skills, new contacts and improved time management. But depending on the type of job and contract – as well as the number of hours worked and the flexibility offered – term-time work can put substantial pressure on students and their academic work. It can also impact the amount of time students have for extracurricular activities. And on top of the stresses and strains of full-time study, it can start to have an effect on mental well-being. One of the students we spoke to explained the impact of having a term time job in her third year:

It made me ill, but I had to get the money. I work all my rent out until the next finance [installment], then I count the weeks to the next finance and split whatever’s left weekly. This semester I was on £9 a week.

This is in part why most universities offer non-repayable bursaries to students from low income backgrounds, in line with access agreement spending. Like maintenance loan entitlement, how much bursaries are worth – depends on a student’s declared household income. These are awarded to eligible students automatically in instalments across each academic year.

Our research found these university administered bursaries can help to alleviate day-to-day budgeting concerns, providing students with the extra cash they need to get by – as one student explained:

[Without the bursary] I’d have to probably work more hours on the job, but that sometimes would clash with lectures. I guess I’d maybe have to make a decision – is the lecture important or not?

But while these bursaries can provide important support for those most in need, eligibility and the amount available to students differs significantly from university to university. This means poorer individuals from universities with higher proportions of eligible students receive less support.

As the Conservative government scrambles to appeal to younger voters, it has proposed further changes to the student loan repayment system – and even floated the idea of cancelling student debt altogether.

But none of these proposals address the pressing issue of day-to-day budgeting while at university. As our research shows, it will not be solved by students simply being “more frugal” – as universities minister Jo Johnson recently suggested.

What is needed is a dusting down of the old government grant system – complimenting the bursaries offered institutionally – to reach those students most in need. This would help to ensure those from low income households are properly supported, and that they don’t leave university with considerably more debt than their peers.