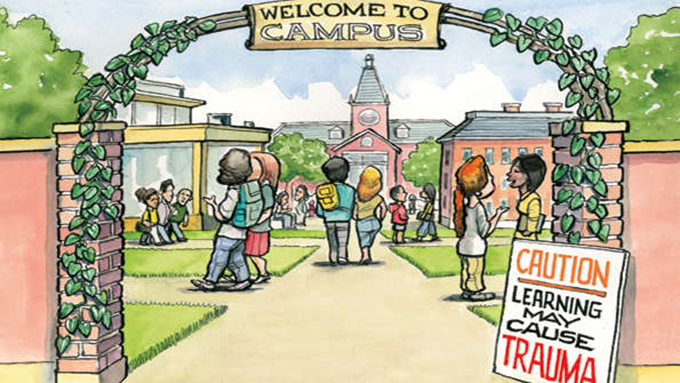 Trigger warnings, “safe spaces” and “no platforming” have all made headlines recently as signs of the deterioration of free speech on campuses in the US. What rarely makes news, though, is another troubling aspect of censorship: so-called bias response teams.

Like a throwback to China’s Red Guards, the student militia who turned on their teachers during Mao’s Cultural Revolution, students at US universities are reporting on other students or academics they deem to have exhibited bias. What exactly classifies as bias is nebulous. It can range from categories already in discrimination statutes to speech that shows a political affiliation. Index on Censorship magazine reports on this issue in an upcoming feature, “Degrees of Separation”.

As part of the report, author Jan Fox, the magazine’s Los Angeles-based editor, spoke to Gad Saad, a visiting professor at Dartmouth College and the University of California, Irvine, who said fellow academics were being “castrated”. They were avoiding controversy out of fear. Fear of what? Their jobs, for one. Even before the expansion of bias response teams, the sacking of academics for taking the “wrong” stance on, say, Israel-Palestine, had occurred. Since then, there have been reports of professors being disciplined and others having their tenure removed at the hands of these teams.

The US-based Foundation for Individual Rights in Education was shocked by how many bias response teams are now operating at US universities. During the course of 2016, the foundation documented at least 231 bias response teams on US campuses, and the number of these teams is believed to be growing at a rapid rate.

But the issue of being judged for your opinions isn’t just confined to the US. In South Africa, a battle over who can say what has been raging for a while in the nation’s universities. Penelope Andrews, dean of the University of Cape Town’s law faculty, told us that the shutting down of intellectual space is coming from across the ideological spectrum. Some on the Right are refusing to confront historical arguments around identity and privilege and claim these links have been played up, while those on the Left are silencing opponents by saying only certain people can discuss and represent certain viewpoints.

The stifling of debate may start in student unions and dorms, but it can soon spread into the lecture hall and compromise teaching. During the #FeesMustFall movement last year, one academic, who didn’t want to be named, said there was “a really terrible climate of suspicion” in her faculty’s staff room at a leading South African institution. Colleagues shied away from saying anything that could be politically misconstrued.

That’s not to say that all academics feel they are being muzzled. Associate professor Mehita Iqani from the University of the Witwatersrand in South Africa argued that every time an academic is shouted down – and she did list a few examples – it generates more discussion as a result, a sort of positive free speech Scylla. Back in the US, Matt Mieskoski, who teaches English to undergraduates at the University of California, Irvine, said he had never had any “blowback” from subject matter he taught and language he used.

These anecdotes would be reassuring were they not so rare. Instead, what Index on Censorship has highlighted is a deeply worrying trend across nations. This includes the UK too, as recently reported.

Students need universities to be places where their minds can be opened and their thoughts challenged. Academics too need to be able to speak without fear of reprisal, to not be afraid of where their research might take them and to pose questions to their students that might be uncomfortable and provocative.

These are the essential elements of tertiary-level education. It is within this environment of robust debate that a marketplace of ideas is created. Call me biased, but that’s the kind of environment that I would want to go to university for.