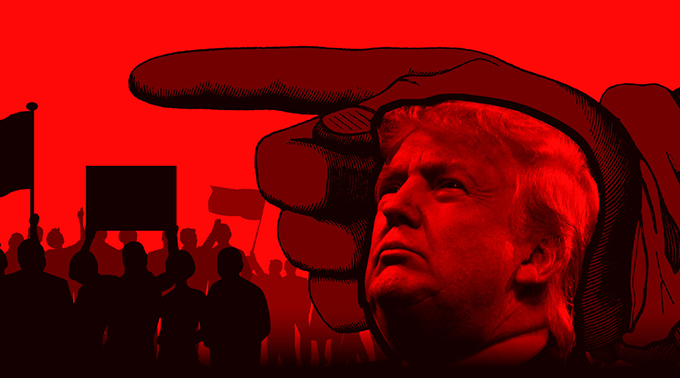 The march in Charlottesville, Va., earlier this summer by white supremacists, neo-Nazis and other right-wing extremists illuminated the growing danger of authoritarian movements both in the United States and across the globe.

It’s signalling a danger that mimics the increasingly forgotten horrors of the 1930s.

Neo-Nazis in the United States, and possibly those worldwide, appear especially emboldened because they’ve found a comfortable, if not supportive, place at the highest levels of the U.S. government.

President Donald Trump’s administration has included white supremacist sympathizers like Steve Bannon, Jeff Sessions and Stephen Miller. All three embrace elements of the nefarious racist ideology that was on full display in Charlottesville.

Trump’s refusal to denounce their Nazi slogans and violence in strong political and ethical terms has suggested his own complicity with such movements.

It should surprise no one that David Duke, a former imperial wizard of the Ku Klux Klan, told the media in the midst of the violence in Charlottesville that white supremacists were “going to fulfil the promises of Donald Trump … to take our country back.”

Nor should it surprise anyone that Trump’s silence delighted the far right.

The Daily Stormer, a white supremacist website, even had this to say: “No condemnation at all. When asked to condemn, he just walked out of the room. Really, really good. God bless him.”

It appears that the presence of Nazi and Confederate flags celebrating a horrendous history of millions lost to the Holocaust and slavery, of lynchings and church bombings, and the assassinations of Black civil rights leaders like Medgar Evans and Martin Luther King, Jr., did little to move Trump.

Charlottesville has resurrected elements of a past that resulted in some of the worst crimes in human history. The ideology, values and institutions of a liberal democracy are once again under assault by those who don’t believe in equality, justice and democracy.

All of these alarming developments raise serious questions about the role of higher education in a democracy.

What role, if not responsibility, do universities have in the face of a new wave of authoritarianism?

What purpose should education serve when rigorous knowledge is replaced by opinions, the truth is labelled “fake news” by the president of the United States and his devotees, unbridled self-interest replaces the social good and language operates in the service of fear, violence and a culture of cruelty?

Universities must hold up democratic ideals

Surely, institutions of higher education cannot limit their role to training at a time when democracy is under assault around the world.

Colleges and universities must define themselves anew as a public good, a protective space for the promotion of democratic ideals, of the social imagination, civic values and a critically engaged citizenship.

Renowned education professor Jon Nixon argues that education must be developed as “a protected space within which to think against the grain of received opinion: a space to question and challenge, to imagine the world from different standpoints and perspectives, to reflect upon ourselves in relation to others and, in so doing, to understand what it means to assume responsibility.”

Given the ongoing attack on civic literacy, truth, historical memory and justice, surely it’s all the more imperative for colleges and universities to teach students to do more than master work-based skills.

Instead, we must educate them to become intelligent, compassionate, critically engaged adults fully aware of the fact that without informed citizens, there is no democracy.

There’s much more at stake here than protecting and opening the boundaries of free speech. There is the more crucial necessity to deepen and expand the formative cultures and public spheres that make democracy possible.

Educators cannot forget that the struggle over democracy is about much more than the struggle over economic resources and power. It’s also about language, agency, desire, identity and imagining a future without injustice.

Return to authoritarianism not far-fetched

As the historian Timothy Snyder has observed, it’s crucial to remember that the success of authoritarian regimes in Germany and other places succeeded, in part, because they were not stopped in the early stages of their development.

The events in Charlottesville provide a glimpse of authoritarianism on the rise and shine a spotlight upon the forces that are trying usher in a new and dangerous era, both in the United States and worldwide.

While it may seem far-fetched to assume American-style totalitarianism will soon become the norm in the United States, a return to authoritarianism is clearly no longer the stuff of fantasy or hysterical paranoia.

That’s especially since its core elements of hatred, exclusion, racism and white supremacy have been incorporated into both the highest echelons of political power and throughout the mainstream right-wing media, especially Fox News and Breitbart.

The authoritarian drama unfolding in the United States includes the use of state force against immigrants, right-wing populist violence against mosques and synagogues and attacks on Muslims, young Blacks and others who do not fit into the vile script of white nationalism.

Charlottesville was just part of a larger trend of domestic terrorism and homegrown fascism that is on the upswing in the United States.

Trump’s administration, after all, has announced it will no longer “investigate white nationalists, who have been responsible for a large share of violent hate crimes in the Unites States.”

Trump has also lifted restrictions imposed by the Obama administration in order to provide local police departments with military surplus equipment such as armed vehicles, bullet-proof vests and grenade launchers.

These actions accelerate Trump’s law-and-order agenda, escalate racial tensions in cities that are often treated like combat zones and reinforce a warrior mentality among police officers.

Equally telling is Trump’s presidential pardon of Joe Arpaio, the notorious white supremacist and disgraced former sheriff of Maricopa County, Arizona. Not only did Arpaio engage in racial profiling, despite being ordered by the court to desist, he also had a notorious reputation for abusing prisoners in his Tent City, which he once called “a concentration camp.”

A nod to domestic terrorism

There is more at work here than Trump’s endorsement of white nationalism; he’s also sending a clear message of support for a culture of violence that both legitimizes and gives meaning to acts of domestic terrorism.

What’s more, there’s a clear contempt for the rule of law. And there’s also an endorsement not just for racist ideology, but for institutional racism and consequently the primacy of the race-based incarceration state.

In his various comments, tweets and policies, Trump has made clear that he does not see himself as the leader of the country, but as the head of a right-wing movement fuelled by rage, isolation, social atomization and communal disintegration, galvanized by a culture of fear and bigotry. He preys upon a populist hatred of democracy.

At the moment we’re seeing a looming collapse of civic culture.

A healthy democracy always struggles to preserve its ideals, values and practices. When taken for granted, justice dies, social responsibility becomes a burden and the seeds of authoritarianism flourish.

We may be in the midst of dark times, but resistance is no longer an option but a necessity.

And educators have a particular responsibility to address this growing assault on democracy. Any other option is an act of complicity, and a negation of what it means for education to matter in a democratic society.

Author Bio: Henry Giroux is Chaired professor for Scholarship in the Public Interest in the Department of English and Cultural Studies at McMaster University