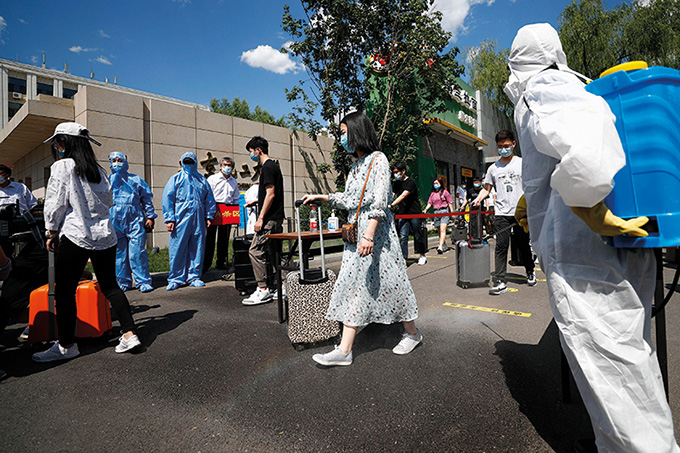 Soon after universities across the UK started classes in September, many reported coronavirus outbreaks – some involving hundreds of students in their halls of residence.

This sparked recrimination and controversy about the best strategy as governments and universities strove to ensure education continued while preventing a full-blown wave of infections and deaths.

Many UK universities have since retreated from face-to-face teaching amid staff fears of contracting the virus, and last week the government announced that all teaching must move online by 9 December, allowing enough time for students with Covid-19 to quarantine and still be home for Christmas.

The government’s guidance on reopening asked universities to introduce enhanced cleaning and social distancing measures. These include managing access to and movement through university buildings, increasing ventilation, providing handwashing and sanitisation facilities, encouraging students and visitors to wear masks, adjusting timetables to reduce congestion, and breaking down large student populations into smaller units to manage outbreaks. Most universities then issued their own guidelines for staff and students – but the outbreaks suggest that these were insufficient.

By contrast, China’s universities have so far reported no outbreaks after reopening for face-to-face teaching after the summer break in late August.

How did they do it? They adopted similar approaches towards sanitation and ventilation to the UK, but also made mask-wearing mandatory and required more stringent health checks on students and staff, both before they could return and once they were on campus.

All students and staff had to take their temperature daily for 14 consecutive days before the start of term and report any symptoms and any recent travel. Those from areas with higher infection rates had to take a Covid-19 test within a week of their planned return to campus.

Once on campus, staff and students’ temperature was checked several times a day. They had to check in on a Covid-19 health app to enter buildings, and those entering or leaving campus had to register on it.

Stringent checks on campus deliveries were also imposed, while student gatherings were forbidden. Student representatives were charged with monitoring the health of peers in classes and dormitories (where as many as seven often share a room) and reporting anyone with symptoms.

Finally, universities put emergency plans in place – coordinated with health services, police and parents – in case of sudden clusters of symptoms such as fevers and dry coughs. Affected students would immediately take protective measures and report to an adviser, while staff would report to university health services. The university would arrange a temporary isolation room in which patients could be kept under medical observation and given appropriate treatment.

These measures were established by the Ministry of Education and the National Health Commission, but were implemented somewhat differently across the country and between universities. Tsinghua University, for example, developed its own Covid-19 app to keep track of both students’ health and their movements on campus. But all universities followed the same overall approach.

The measures may have worked well in part because China was experiencing very low numbers of Covid-19 cases by mid-August. Moreover, these cases were confined to people arriving from abroad, all of whom were required to quarantine for 14 days after arrival. China’s measures may also be best suited to universities where most students live on campus and their movements can be more easily monitored. But what could be replicated in the UK and elsewhere are the pre-arrival checks to limit the chances of students bringing infections to campus, as well as the continuous monitoring of student health and clear lines of reporting.

It is true that some of the Chinese measures did meet with student complaints. Opposition was particularly strong to restrictions and checks on movement, and the recent furious reaction of students at the University of Manchester to the erection of a fence around their hall of residence suggests that UK students would also struggle to accept such measures. But, in China, the restrictions were relaxed and became more flexible as time went by and infection rates stayed low.

UK ministers and vice-chancellors would, of course, have to communicate clearly on the need for any new measures. But they would do well to consider adopting them as they draw up plans for students’ return in the new year.

Author Bios: Yingru Li is Lecturer in Financial Accounting, Tax and Audit and Jane Duckett is Edward Caird Chair of Politics at the University of Glasgow. Research underpinning this article was funded by the Medical Research Council and National Institute for Health Research.