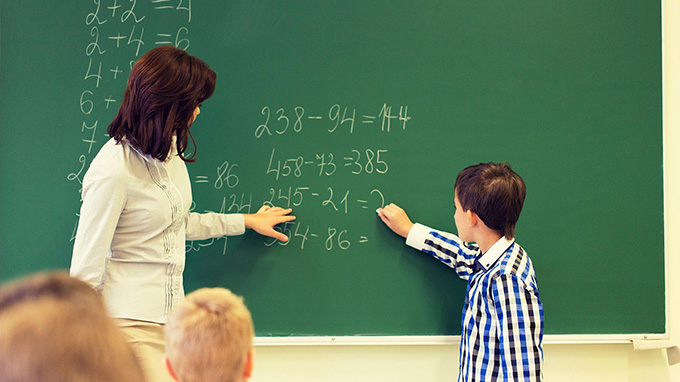 A storm wind currently seems to be blowing on the teaching of mathematics if we judge by the sensational declarations of this beginning of the year 2022 around the reform of the high school initiated by the Minister of National Education Jean-Michel Blanquer, and entered into force in 2019.

By putting an end to the general series S (scientific), L (literary) and ES (economic and social), this reform reorganized the first and final year programs around a core of compulsory subjects, specialty lessons – three in première, two in terminale to choose from a dozen possibilities – and from one to two options .

In this context, maths leaves the common core at the end of the second and is taught either as a specialty or as an “additional mathematics” option in terminale for those who abandon the specialty in terminale. “We wanted to reduce the pressure on this discipline and for it to no longer be a variable for selecting students, but a teaching of choice,” Inspector General Charles Torossian , co-author with Cédric Villani, told Le Monde in 2018. , of the “21 measures for the teaching of mathematics”.

As a result, the number of students studying maths up to the baccalaureate would be in decline. In 2020-2021, “59% of students were taking maths education in the final year compared to 90% before the reform”, according to learned societies and mathematical associations which are concerned about the consequences of these developments. Concerns taken up by the Medef which asks in its proposals for the 2022 presidential election to “strengthen mathematical, scientific, technological and digital education” and to return to the reform of the baccalaureate “in a context where the training of engineers and technicians is paramount”.

A battle of numbers raged, complex and even quite confusing. And on Sunday, on Cnews, Jean-Michel Blanquer came to say that it would “probably” be necessary to add mathematics to the common core of first and final year classes so that “all students” have more “culture mathematical “.

Behind all these debates is the question of the place of maths in the education system and in society in general. Taking a little historical distance allows us to understand that maths has not always been the queen discipline that we know, that its place has varied over time and is a matter of public debate.

Let us first recall that, for a long time, it was the classics that were the very principle of the education of the elites, science and mathematics being reduced to the minimum portion. In the middle of the 19th century, in classical secondary education (the only secondary that existed at the time, reserved in fact for less than 2% of boys), a high school student, following a complete course from sixth to final year, passed 40 % of his time in Latin and Greek (twice as much in Latin as in Greek), 13% in French, 11% in history-geography, 11% in mathematics and science, 8% in living language.

If it is the Gaullist period that will mark a turning point for the place of maths and sciences in the training of students, the reform of 1902 already institutes a “modern” breach in the system. After a classical first cycle, three sections are distinguished in second: a Latin-Greek section (A), a Latin-languages ​​section (B), a Latin-sciences section (C); but there is now also a modern section called language-sciences (D) which succeeds a first cycle without Latin. However, the hierarchy of the sections is unequivocal: the three classic sections take precedence over the newcomer, the “modern” section.

When Charles de Gaulle became President of the Republic in 1958, the Treaty of Rome, signed in 1957, had just established the European Community. The putting into orbit by the Soviet Union, also in 1957, of the first terrestrial satellite – the sputnik – challenges all the countries of the West: what about the scientifico-technological supremacy of each other? ?

From the mid-1950s, the USA had already launched an alarmist campaign aimed at their public opinion and their European allies: the USSR was winning the battle for brains, engineers and executives. superiors. Gaullist nationalist voluntarism takes this situation as a challenge to be met, as Charles de Gaulle’s Memoirs of Hope point out:
“Since in our time France must transform itself in order to survive, it will depend as much as ever on what the minds of its children will be worth as they come to assume its existence, its role, its prestige […]. It is a question of the education given to them, while developing their reason and their reflection as before, responding to the conditions of the time which are scientific and technical utilities”.
Under the very important decree of June 10, 1965 , the paths leading to the baccalaureate are specialized from the second class with four general series (or streams): A (literary), B (economic and social sciences), C (mathematics), D (experimental sciences).

It should be noted that these developments in secondary education are also accompanied by changes in outlook at primary level. If “the practical exercises, the usual applications, the simple and familiar demonstrations”, must “be the soul and the life of the school” according to the Official Instructions of March 28, 1882 (signed Jules Ferry), in 1960, the mathematician Jean Dieudonné raises in a famous text the question of a completely different place for mathematics and a completely different teaching.
“What purpose do we pursue in our modern civilizations by teaching mathematics to children? It is a question of teaching them to order and link their thoughts according to the method used by mathematicians because this exercise is recognized as an excellent means of developing clarity of mind and rigor of judgment. It is therefore the essence of the mathematical method that must be the subject of this teaching, the subjects taught must only be well-chosen illustrations of it”.
It is thus, after a few adventures, that we will have the establishment at school of what will be called “modern mathematics”, from the second half of the 1960s in secondary education, from of 1970 in the primary. Proponents of “modern mathematics” unified mathematics through a formalism that implied a higher level of abstraction. In doing so, they did not always avoid – far from it – setting up a kind of formal language whose lexicon and syntax had to be learned, which required intellectual gymnastics likely to have elitist effects, even unequal.

At high school level, the stream system had been designed as a functional framework for a good orientation that takes into account the aptitudes and tastes of the students in order to prepare them, in appropriate courses, for specified pursuits of study in Higher Education. But the C sector (known as “maths-sciences”, since renamed S after its merger with the former D sector) was coveted well beyond what it should normally (functionally) lead to, namely specific orientations requiring special abilities in mathematics and science.

Due to its dominant position as a sector of excellence, it has opened up practically everything (and often as a priority), which has led to a certain number of dysfunctions in the chain of the system, to the detriment of sector B (since renamed SES , “economic and social sciences”) and above all of the A sector (“literary” since renamed L). As early as 1983, the report on second cycles emphasized that “studies with a scientific focus, diverted from their purpose, in fact serve to define an elite”. Since that date, all the reports on the high school , all the reform projects have sought to “rebalance the sectors and the series” by fighting against the pre-eminence of the scientific baccalaureate constituted as the royal road.


That didn’t imply that math itself was the way to go. On the contrary, in some respects. Admittedly, it was because there was higher level mathematics in this sector than in the others that this sector was able to become the “royal road”. But a number of students chose it not to prepare for higher education requiring a high level of mathematics, but because one could have that baccalaureate with average, or even mediocre, marks in mathematics, offset by good grades in other disciplines and that – in doing so – this baccalaureate C or S was in fact less a “maths-sciences” baccalaureate than a general baccalaureate of excellence hovering above the others.

The reform initiated by the Minister of National Education Jean-Michel Blanquer tries to put an end to the system of sectors which resulted in this major dysfunction without being able to be corrected. Will we end up this time not with a generalist sector of excellence (baptized “maths-sciences”) but with a “royal road” of the discipline “mathematics” itself? Or are there other paths to excellence (even “royal”) in other disciplines? History, as they say, will decide.

Author Bio: Claude Lelievre is a Teacher-researcher in the history of education, honorary professor at Paris-Descartes at the University of Paris