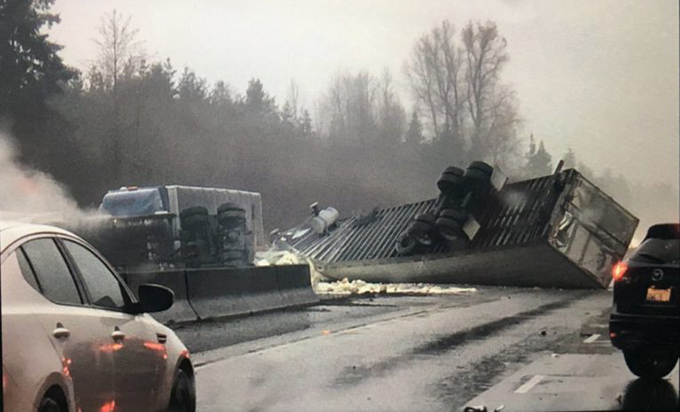 The big 18-wheeler trucks traveling on area highways and interstates are a common site, serving a critical function as part of the U.S. supply chain by transporting basic goods and household items that consumers rely upon.

Although these large trucks play a critical role, they can also pose a serious threat to commuters who must share the highways and interstates with them. These massive vehicles can be a deadly force on the road if truck drivers are negligent and fail to properly operate and maintain the vehicles or if they haul goods for companies that have no respect for road safety precautions and government regulations designed to make these trucks safer.

The volume of big trucks traveling U.S. roads is staggering, with an estimated 15.5 million trucks operating in the U.S., including 2 million tractor-trailers. The massive size of these trucks transporting goods across U.S. highways is one of the reasons they pose such a threat to other commuters in vehicles. In addition to their size, these trucks haul cargo that can easily surpass tens of thousands of pounds. With that size and amount of weight they are hauling, commuter vehicles like cars and SUVs are no match for the big trucks in an accident.

Chances are if a commuter vehicle collides with one of these big trucks, the accident will likely cause significant damage and injuries, maybe even fatalities. That’s why commuters need to remain vigilant when driving. In Phoenix, Interstates 10 and 17 ranks among the most traveled roadways by these big trucks. Commuters sharing the interstates face the most danger from these trucks, and that could lead to accidents and the need for a truck accident lawyer in Phoenix. Among the many benefits of hiring a good attorney after an incident is the way experienced truck accident lawyers collect evidence for clients at the accident scene.

Here are some of the most common accidents these large trucks are involved in on highways and interstates.

When the driver of a big truck hits the brakes suddenly and hard, the truck’s cab slides into a 90-degree angle with the heavily-loaded trailer hauled by the truck. The trailer is slammed against the cab of the truck as the weight of the haul being carried shifts inside.

The height of big trucks, in addition to their heavy loads, makes them more vulnerable to a rollover when the driver loses control of the vehicle. The truck will slide, lean over on its side, and roll, sometimes colliding with nearby vehicles. These types of accidents can occur during stormy weather.

When big trucks experience a tire blowout, it can be tricky to maneuver the truck. Some drivers lose control, while others navigate to a shoulder. Even if blowouts do not result in a loss of control, the tires or remnants can fly off and hit other vehicles or cause accidents.

This accident occurs when a big truck’s load shifts or becomes lost. This cargo can hit other vehicles. An improperly secured load also causes an imbalance on the truck that may make it difficult for the driver to maneuver.

A sudden and complete stop of a big truck can leave little time for the driver in the vehicle behind the truck to react. In some cases, smaller vehicles traveling behind the truck can become lodged under the truck’s trailer. These accidents involve a victim who is killed because the impact is so significant.