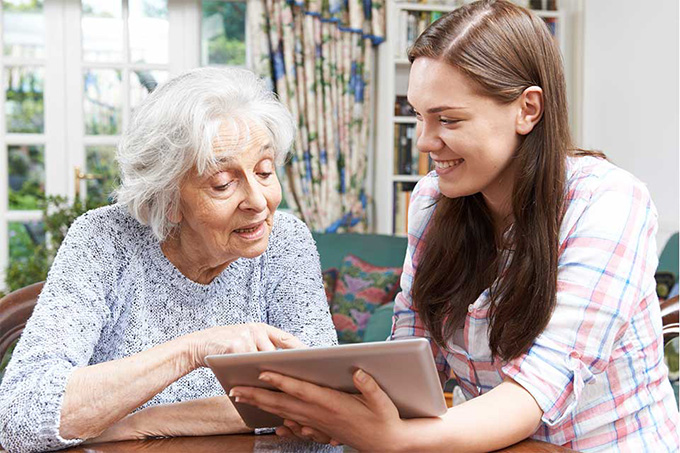 Digital technologies have often seemed to create a form of generational distance in families. But as the epidemic worsens and the curfew has been established everywhere in France, they are proving more and more valuable in maintaining communication between grandparents and grandchildren and appear today as “linkage” factors.

Instead of seeing each other for the eternal Sunday lunch, we communicate electronically, exchanging videos of the grandchildren. We can observe the emergence of the phenomenon of “Skype grandparents”. A study reveals, for example, that 78% of grandparents have online contact with their grandchildren, and 50% of them use WhatsApp. Some are even adopting TikTok, the video-based social network popular with teens.

If, classically, the transmission of skills and knowledge is thought of as a “top-down” process, which goes from the old to the young, this pre-established pattern is called into question by digital technology. Transmission is not just a one-way street. This can be explained by a new relationship to time, which is no longer that of permanence and social reproduction, but that of instantaneity, mobility and all the identity uncertainties that result from it.

It is communication technologies, now located at the heart of juvenile sociability, which help to affect this relationship to time by precipitating the desire for immediacy. These young people – the “digital natives”, born with the Internet and growing up in a digital culture, have a strong level of connection and play a privileged role in the learning of their grandparents. Consequently, they become “agents of socialization” of their elders, in particular in the most technological activities, for which, in certain circles, their competence exceeds that of their elders.

Since the first strict confinement last March, the games of hide and seek between grandparents and grandchildren have taken a different turn and are now taking place behind screens, by interposed video. While it is recognized that digital tools can isolate individuals, in the age of Covid-19, they are also creating new ways of communicating.

Instagram, Tiktok and WhatsApp have gone from fun apps for teenagers to a real social phenomenon: they have won over grandparents who send photos, messages and call their grandchildren on video. To compensate for the lack of telling stories to grandchildren, apps, such as Story-Enjoy, have emerged that allow a story to be recorded on video to send to the grandchildren.

Classically, two main learning modes come into play: collaborative mode and affirmative mode. The collaborative form is based on exchange and takes place in a common temporal and physical space between grandchildren and grandparents. Learning takes place together, and the screens of digital tablets and computers serve as a support for real relationships, bringing grandparents and their grandchildren together physically. Conversely, the affirmative mode takes place in a temporal and physical space dissociated from the process followed by the grandparents.

The advent of new technologies quite logically contributes to giving more power to minor children within their families, and in particular with regard to their grandparents. This reverse socialization even tends to blur generational boundaries. This transfer of skills can also lead us to question today about family transmission.