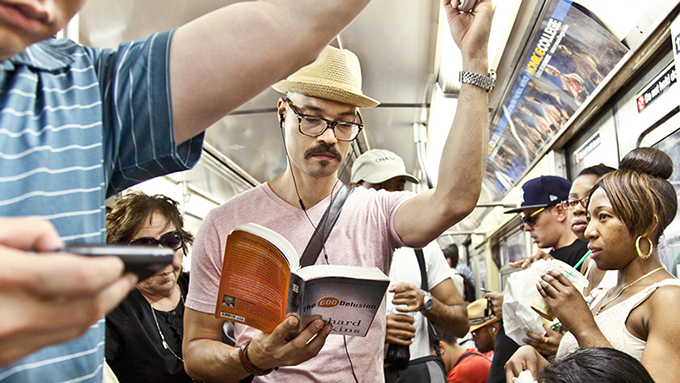 A few years ago the dating website eHarmony found that profiles that included reading in their list of hobbies were more attractive to the opposite sex. Specifically, the data revealed that men who mention reading as one of their personal interests receive 19% more messages, although, in the case of women, those who claimed to read received only 3% more.

It should be clarified that Winterson is referring to some specific photos: those of Marilyn Monroe reading James Joyce’s Ulysses .

One summer day in 1955, Eve Arnold, one of the few star photographers of that time, went to look for her model to take the agreed series of photos. When Arnold and Monroe stopped at a park, the latter was engrossed in reading Ulysses while Arnold fed a film into her camera. When she was ready, she couldn’t resist photographing the actress in that trance. It is suspected that the initiative to take these snapshots came from Marilyn herself, who felt as attracted to the world of literature and theater as she was to the spotlight.

On the other hand, reading was her main tool to combat her dumb blonde image .

It’s obvious that Marilyn Monroe (or Paul Newman, say) is sexy with or without reading. However, what Winterson is really talking about is the fascination exerted by the image of a reader, any reader.

This is what Saint Augustine must have experienced when observing , towards the end of the fourth century, Saint Ambrose, bishop of Milan, reading in silence:
“When he read, his eyes traveled the pages and his heart penetrated the meaning; but his voice and her tongue rested. Many times, when I was present, because no one was forbidden to enter and there was no custom in his house to announce the visitor, I saw him read in silence and never in any other way.”

Saint Augustine, Confessions , VI, 3
It is not surprising that Saint Augustine was surprised by the silent exercise of reading, since, at that time, all readings were done aloud. But apart from this fact, Irene Vallejo goes further :
“Agustín realizes that this reader is not by his side despite their great physical proximity, but rather that he has escaped to another freer and more fluid world chosen by him, he is traveling without moving and without revealing to anyone where to find him” .

From Saint Ambrose to Marilyn Monroe, there have been many portraits or self-portraits of people with a book in their hands.

Ourit Ben-Haïm, a Moroccan photographer based in New York, driven by the same attraction, launched a project called the Underground New York Public Library , whose purpose was to gather photos of anonymous people reading on the platforms or in the interior of New York subway cars.

“Reading is sexy” continues to be a slogan that is intended to attract attention, especially in marked anniversaries, but it is not something new. The same expression in English, reading is sexy , was created in the image and likeness of smart is the new sexy ( as Cristian Vázquez explains , “something like being smart is the new characteristic of sensuality”), a phrase used by the Newspaper Association of America to promote newspaper reading in the United States.

Perhaps there is some truth, from a psychological point of view, in the fascination with these images. Vázquez tries to justify it in this way:
“What we like about a person who reads is to see them immersed in a strange world, which has nothing to do with the environment that surrounds them, a world of which we can barely get the slightest hints through their faces, their expressions. That is to say, the face of a reader is a kind of window to the world created by the book”.

The mystery of reading

Apparently, what is so mysterious in these types of photos is the fact that reading is the most private and intimate act (“it is the talk with the lover, it is the place of whispers and sighs”, Winterson goes so far as to say ), since by reading we become inaccessible and unattainable, while the observer is submerged in an infinite feeling of helplessness.

A good proposal to contemplate images, portraits and photos of people reading is Bollman’s book entitled Women who read are dangerous , a moving tribute to female readers, which brings together an impressive selection of paintings, engravings and photographs of women reading, made by various artists from the Middle Ages to the present. Precisely, the photograph that closes this gallery is that of Marilyn Monroe reading Ulysses .

It is the perfect time for us to give ourselves the opportunity to lose ourselves in the feelings and fantasies that are born from reading. Because, as Emily Dickinson said, “there is no better frigate than a book to take us to distant lands”.

Author Bio: Silvia Hurtado Gonzalez is Professor of the Department of Spanish Language of the Faculty of Philosophy and Letters at the University of Valladolid