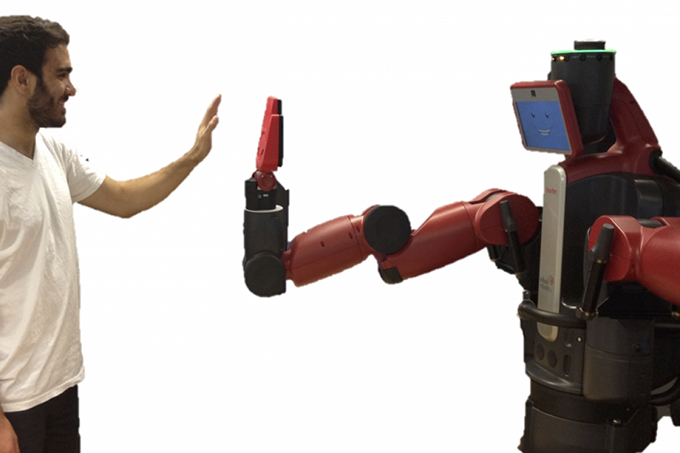 Look at these two pictures. Which robot do you think is the smartest? The most sociable? The warmest? The most aware of his surroundings?

In the majority of cases, people choose the second robot. However, in both cases, we are evaluating a set of electronic and mechanical components. So why do we distinguish between these two robots?

Because under certain conditions we tend to attribute human characteristics to non-humans, such as sociability or intelligence. It is anthropomorphism.

Anthropomorphizing robots can produce surprising behaviors. For example, during a test of an American military robot designed to walk on landmines, the colonel in charge of the exercise reported some uneasiness watching the robot drag itself across the minefield after a detonation, and described the exercise as “inhuman”. The robot does not necessarily have to have a physical “body” for us to consider it conscious. Thus, Google’s chatbot algorithm, LaMDA (based on highly developed models ), showed that by the “only” language, an artificial agent could be considered “sentient” by an employee .

Anthropomorphism is well known to us and is present throughout the world. It pushes us to attach ourselves or to want to interact, with animals for example – which can produce structuring effects for our society since researchers have shown, for example, that we are much more inclined to protect animal species than t is easy for us to anthropomorphize, like mammals for example .

Within the framework of human-robot interactions, anthropomorphism allows humans to initiate social behaviors towards their robot companions , to develop feelings for them or concern about their fate, or to view their presence as similar to that of a human. However, the reason for this anthropomorphism is explained in very different ways from one culture to another.

Where does anthropomorphism come from?

Anthropomorphism can be catalyzed by the presence of human physical characteristics, such as the presence of a face on a robot. But it can also appear in our tendency to perceive cognitive or emotional abilities in non-humans (different tendency for each individual). Several contextual variables can facilitate or inhibit this process, but, in general, when a human must explain the behavior of a non-human, he uses knowledge he possesses to explain the behavior he observes – especially if this behavior is unexpected . For this he will base himself on the basis of interpretation that he knows best: human behavior.

In the context of human-robot interactions, the growth of research on anthropomorphism is linked to the development of social robotics, and its questions: “how do we perceive and consider the robots with which we interact? This question, much deeper than it seems, questions our relationship to what we consider to be alive or “sentient”, that is to say capable of subjectively experiencing the world and feeling it.

Numerous studies, models and measurement tools ranging from questionnaires to the measurement of brain activity have been proposed to qualify and quantify anthropomorphism towards “social robots” – those designed to interact with us by reproducing our interaction behaviors. social. And even if anthropomorphism seems common to all humans, our studies (source) show that, if a French woman and a Japanese woman can agree on the more “human” character – warm, social, intelligent for example – than another, this appreciation is the result of very different processes in the two cultures .

A western cultural stereotype is to think of Japan as a country of robots, a country where these artificial agents are integrated, appreciated and considered in a way that leaves the West wondering. It has been argued that Japan’s relationship with robots is a consequence of the Shinto philosophy that pervades Japanese culture, where every physical object is imbued with a spiritual essence. It is said to share a “quiddity”. It means that you, me or the screen on which you read this text are imbued with this essence.

Conversely, in the West, there is a very widely shared philosophical distinction between the Human and the rest of the world , even if it is discussed . Therefore, a robot, even if it can be anthropomorphized anywhere in the world, would be culturally less so in the West than in Japan.

A recent study has shown that this explanation oversimplifies a process rooted in the field of intercultural social and cognitive psychology. Indeed, Korean/Japanese and German/American participants attributed the same level of cognitive, emotional and intentional abilities to a robot, but through significantly different sociocognitive processes .

For the Korean and Japanese participants, the important thing is to note the sharing of a common characteristic with the robot to be judged. The logic is as follows: since we share an essence, a “quiddity”, then perhaps we share cognitive, emotional or intentional capacities. The result is an anthropomorphism of the robot based on the observation of similarities.

Western participants actually compare themselves with the robot. The further the robot is considered to be from the observer, the less it is considered to possess cognitive, emotional or intentional capacities. Here, we would be closer to an “egomorphism” based on the search for differences, that is to say the attribution to the robot of the characteristics of the prototype of what defines a human… this prototype being the observer himself. same.

The Western prism, a trompe-l’oeil in our interactions with technologies

This difference illustrates in fact a more general problem: today, studies of our interactions with robots, and more generally studies in cognitive and social sciences, proceed from scientific studies mainly produced in the West. A prism is posed by science to universalize a specific representation of the world, but this universalization forgets the importance of culture on the formation of our socio-cognitive processes.

What we know about the perception of robots and other socio-cognitive processes is often presented as generalizable, whereas this knowledge comes from extremely homogeneous samples of participants. For example, in social and cognitive psychology, my field of research, the vast majority of studies stem from observations of a white Western student population, in a small age group and sharing an extremely homogeneous cultural corpus . From this simple fact, it seems obvious that the generalization is limited to a small fraction of the world population sharing these characteristics.

What cultural anthropomorphism teaches us is that our way of perceiving the other, whether human or not, is not necessarily that of our neighbor and that this implies considering these alternative visions in the same way. than ours. It is good to keep in mind that our relationship to the world is by definition subjective, biased and partial . By undervaluing these differences, we are doing nothing but forgetting a part of humanity.

Author Bio: Nicolas Spatola is a Researcher at the Istituto Italiano di Tecnologia in Genoa (Italy) and Lecturer at Sciences Po